Critics out of the Venice Film Festival say Pablo Larraín’s latest is a poetic, eerie “masterpiece” – or a potential camp classic, perhaps – that makes a perfect companion piece to his Jackie. 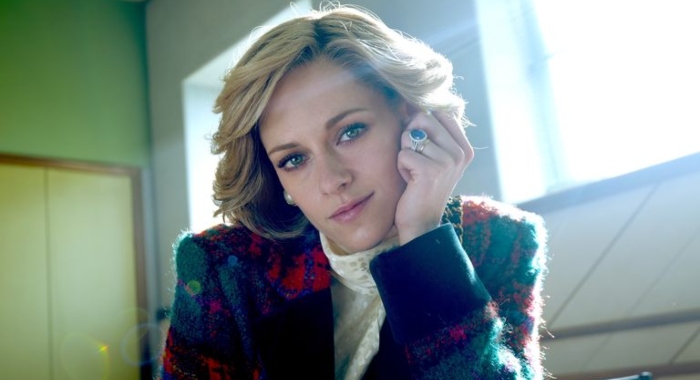 One of the most intriguing biopics in years, Spencer stars American actress Kristen Stewart as Princess Diana, a world-famous figure who has already been portrayed many times before (including recently in the acclaimed fourth season of The Crown). This time, Chilean filmmaker Pablo Larraín is at the helm and the first reviews out of the Venice Film Festival are praising Spencer as a fitting companion to his Jackie Kennedy film starring Natalie Portman, Jackie. Could this be another major Oscar contender? That’s a good possibility. But this is also another artsy portrait that may not hold a broad enough appeal to enthrall all fans of Stewart, Diana, or stories involving the British throne in general.

Here’s what critics are saying about Spencer:

How is Kristen Stewart’s portrayal of Diana?

“I can’t say enough about Stewart’s performance…it is a bracing, bitter, moving, and altogether stunning turn, taking Diana down roads we have not seen played out quite like in this mesmerizing portrayal.” – Pete Hammond, Deadline Hollywood Daily

“Kristen Stewart doesn’t just do an impersonation (though on the level of impersonation she’s superb). She transforms; she changes her aspect, her rhythm, her karma.” – Owen Gleiberman, Variety

“This is no impression — it’s more an interpretation of a classic role, bringing layers of real human complexity.” – Jason Solomons, The Wrap

“Casting Stewart, another reserved celebrity who knows the obsessive, overbearing glare of fandom better than most, is inspired… it’s a wry, empathetic evocation of a woman somehow locked out of both her inner and outer lives, frozen in the corridor.” – Guy Lodge, Film of the Week

Are there any standouts in the supporting roles?

“Sally Hawkins is very fine and hits just the right notes in [her] role…[Jack] Farthing manages to nail the tightly controlled Charles, but does show flashes of a human being eventually.” – Pete Hammond, Deadline Hollywood Daily

How does the movie compare to Jackie?

“Like Larraín’s earlier film Jackie, in which Natalie Portman starred as JFK’s grieving wife, this is a self-consciously poetic and elegiac affair.” – Geoffrey Macnab, Independent (UK)

“Spencer is a movie made very much in the spirit of Larraín’s Jackie…every bit as good; it may be even better.” – Owen Gleiberman, Variety

“As in Larraín’s equally brilliant, surprising Jackie, to which Spencer is an intricately attuned companion piece, the director thrills in presenting a public icon freed of her public, unsure how to act around herself.” – Guy Lodge, Film of the Week

“Spencer is something else indeed…a more accessible approach in some ways, but also more ambitious.” – Pete Hammond, Deadline Hollywood Daily

“Unlike the maelstrom of emotions in Larain’s previous, and similarly-calibrated celebrity portrait pic, Jackie, this one is slower, linear and more austere, better to fit the genteel and regimented-to-death context of a Yuletide with Her Majesty.” – David Jenkins, Little White Lies

Is Spencer better than past Princess Diana biopics?

“Far from the laughable disaster of Oliver Hirshbiegel’s 2013 Diana starring Naomi Watts, Larrain’s Spencer will cause a sensation…it’s certainly a royal biopic like no other.” – Jason Solomons, The Wrap

“We have seen many takes on Diana…but Larrain has something very different, very intimate, and very revealing in mind here.” – Pete Hammond, Deadline Hollywood Daily

Will it please fans of The Crown?

“This is a long way from the more decorous treatment of Netflix’s The Crown.” – David Rooney, Hollywood Reporter

“This isn’t The Crown, it is far more insular, an intimate portrait of a woman trying to save herself.” – Pete Hammond, Deadline Hollywood Daily

“Larrain, working from Steven Knight’s script, is clearly going for something more classical here than can be found in an episode of the giant Netflix series The Crown.” – Jason Solomons, The Wrap

“Spencer, the eerie, witty and quite extraordinary film that has resulted from their persistence, isn’t necessarily for fans of The Crown, or fetishists of royal ritual and ceremony.” – Guy Lodge, Film of the Week

“Unlike The Crown, there is no risk whatsoever of Pablo Larraín’s resplendently mad, sad and beautiful Spencer…being mistaken for historical fact.” – Robbie Collin, Daily Telegraph (UK) 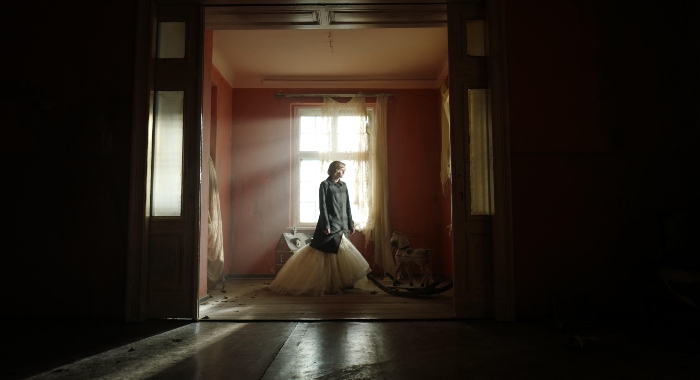 Is there a particular classic film it will remind us of?

“Larrain’s overhead shot of Diana’s approach turns Sandringham into a haunted house, or the Overlook Hotel from The Shining, rather than a royal residence.” – Jason Solomons, The Wrap

“Larraín makes the place look as spooky as Kubrick’s hotel in The Shining.” – Xan Brooks, Guardian

“Larraín places Di in this luxe getaway palace as if he were making a royal version of The Shining.” – Owen Gleiberman, Variety

“Not for nothing do the long, depopulated hallways of Sandringham occasionally call the Overlook Hotel to mind.” – Guy Lodge, Film of the Week

“The script, by Steven Knight, creates its own alluring cleverness. It’s there in Diana’s dialogue, which consists of her spewing out observations, to others but almost to herself, with a kind of rueful mockery.” – Owen Gleiberman, Variety

“The dialogue is rather on-the-nose, and practically every sentence feels aware of itself as a pronouncement of era-defining depth and acuity.” – Jason Solomons, The Wrap

“The script by Steven Knight is problematic from the get-go, packed with lots of winking pop psychology and on-the-nose portent, and clearly written with future tragedy in mind.” – David Jenkins, Little White Lies

“There are some scenes that risk teetering into unintentional comedy…it could well grow into a gothic, almost camp classic.” – Jason Solomons, The Wrap 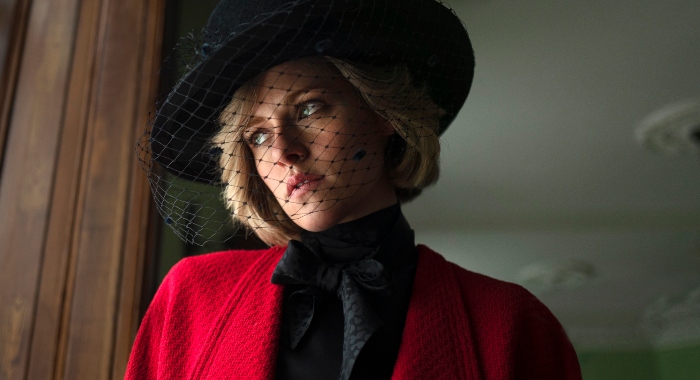 “Mathon’s camerawork is ravishing, constantly in motion, gliding behind and circling a subject who bristles at being under constant surveillance.” – David Rooney, Hollywood Reporter

“The remarkable production design, by Guy Hendrix Dyas, turns the interiors of Sandringham into a profusion of textures that dance before our eyes.” – Owen Gleiberman, Variety

How is the score?

“Composer Jonny Greenwood [twists] the traditional sounds of heraldry into something creepy and unsettling.” – Jason Solomons, The Wrap

“The music by Jonny Greenwood is as bracing and risky as anything else in Larraín’s film, shifting from melodic piano and string themes early on into discordant free-form jazz or oppressive pipe organ passages as Diana’s self-possession unravels.” – David Rooney, Hollywood Reporter

Does the Royal Family come off looking badly?

“There is no question the film firmly lands on the side of Diana… [it’s] a humorless, stiff, and dreary picture of Royal life that seems about as lifeless as possible.” – Pete Hammond, Deadline Hollywood Daily

“While some will no doubt reject Spencer as lurid psychodrama, the presentation of the royal family as a sinister body corporate, ready to inflict wounds and ice out any interloper who tarnishes their brand is chillingly compelling.” – David Rooney, Hollywood Reporter

“It is an understatement to say that many living royals – including the current regent – do not come off well in this film.” – David Jenkins, Little White Lies

“No doubt it took an outsider to make a film that’s as un-reverential as Spencer, which dares to examine the royals as if they were specimens under glass.” – Xan Brooks, Guardian

“All the right people are going to hate Spencer. That’s just how good it is.” – Jessica Kiang, The Playlist 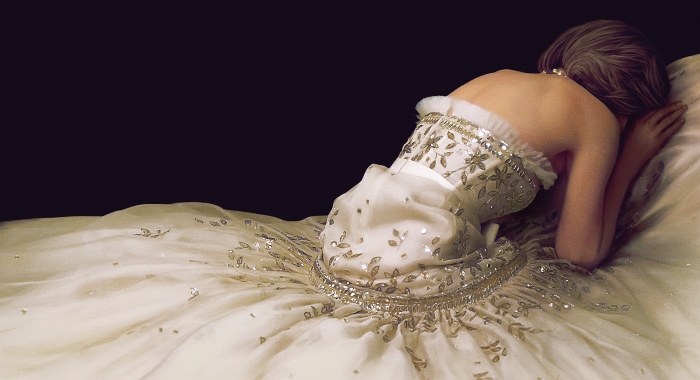 Will anyone have an issue with its historical or physical accuracy?

“This is a film in which the essence of the characters is given more weight than the actors’ resemblance to them.” – David Rooney, Hollywood Reporter

“The film is bound to infuriate traditionalists. Larraín and Knight have taken huge liberties with their subject matter.” – Geoffrey Macnab, Independent (UK)

“Entirely to its credit, Spencer is nothing like real history, and its Diana can certainly not be proven to be anything like the real Diana, whoever that poor woman was.” – Jessica Kiang, The Playlist

What one or two words are best to describe the movie?

Spencer is in theaters from Friday November 5, 2021.