Six Pixar Sequels and Spinoffs We Want to see Next

Remy gets a food truck in Rata-2-ille and Jack-Jack hits puberty in this Pixar sequel wish list.

The much-anticipated Incredibles 2 opens in theaters this weekend, 14 years after the original The Incredibles, which remains one of Pixar Animation’s most enduring – and well-reviewed – films. Early reviews have been universally strong for the second movie, with some critics saying it’s the best Pixar sequel to come along since Toy Story 3 back in 2010.

But what other sequels and spinoffs might exist in the Pixar universe? We let our imaginations run wild, conjured up six projects we’d love to see, and figured that if we believed in those wishes hard enough, our dreams might come true – a certain studio told us that. (Of course, this is pure speculation – and plain old fun; if you want to know what’s officially on Pixar’s slate, check here.) 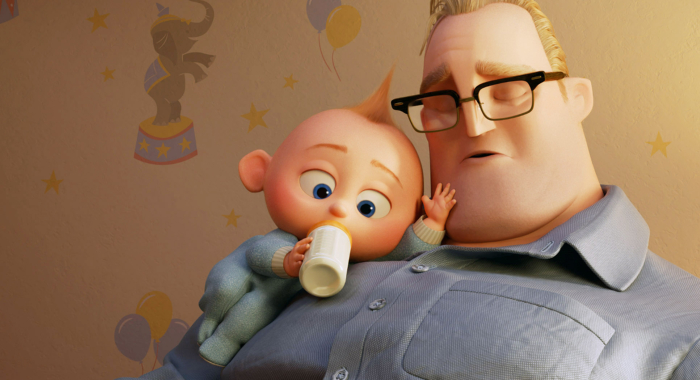 OK, it’s not even out yet. But this sequel is going to be such a massive hit that a third installment in the franchise will surely be in the works (maybe in a decade, but still). And when you see it, you will see for yourself that Jack-Jack is the runaway star. Sometimes, that’s true literally: Mr. Incredible and Elastigirl’s baby son is just beginning to discover his powers in Incredibles 2, which allow him to do more than just toddle down hallways. He can transport himself from room to room – and shoot lasers from his eyes, and multiply, and transform into a raging baby beast if he doesn’t get a cookie. It’s all super adorable – for now, at least. But imagine how difficult it’ll be once puberty hits. In addition to the awkwardness of having his voice and body change and the anxiety of all those hormones coursing through his body, Jack-Jack also will have to contend with the unpredictability of his various superpowers. Should make for some eventful middle school dances.

Tagline: Everyone suffers from growing pains. But these are incredible. 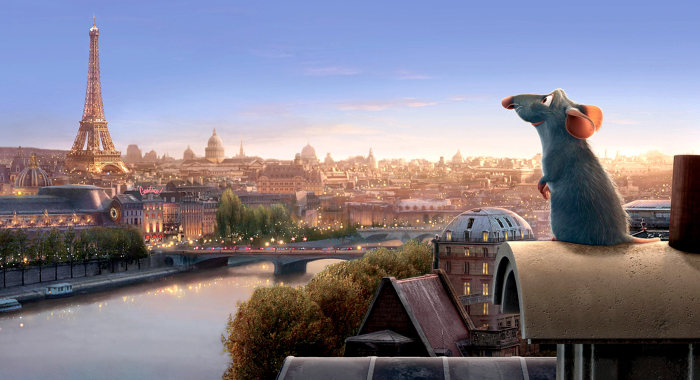 Remy the rat has enjoyed success for a while as a gourmet chef in Paris. He’s been living the dream, creating delicious food for his favorite people in the city he loves. But times and tastes change. A declining economy and a trend toward meals that are quicker and simpler force Remy to shut down his bistro. While sitting on the sidewalk feeling sorry for himself, he notices a line forming across the street for a bright and colorful vehicle and has an epiphany: He’ll open a food truck. They’re all the rage these days, they’re cheaper and easier to maintain, and the mobility they provide will allow him to bring his cuisine to people all over France who might never have tasted it otherwise. Remy designs hand-held, on-the-go versions of all his signature dishes. And Anton Ego, the once-stodgy critic who’d funded his restaurant, agrees to take on new responsibilities as his driver. Madcap buddy road-trip comedy ensues.

Tagline:  On the road(ent) again.

INSIDE OUT VS. MONSTERS UNIVERSITY 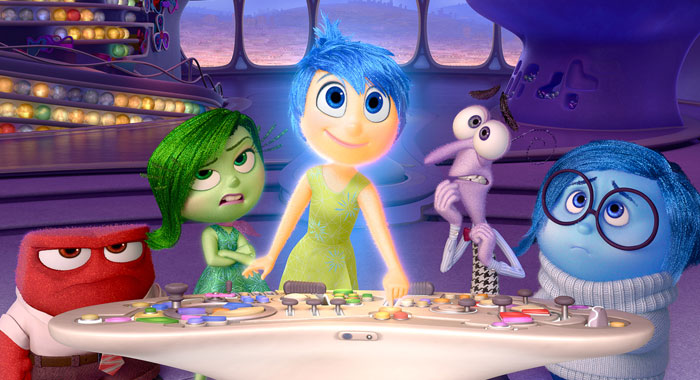 In Inside Out, we saw Riley struggle through one of the toughest times in her young life – navigating middle school while living in a new place – with the help of her emotions and her core memories. Joy, Sadness, Anger, Fear, and Disgust were all there to help her figure out who she truly was when situations got confusing. Now it’s a few years later, and Riley is off to college. But what she didn’t realize when she said yes to a full-ride hockey scholarship was that Monsters University really is a university full of monsters. From dorm life and coursework to football games and fraternity parties, every situation is fraught – sort of like it is for every incoming freshman, regardless of the school –and we’re right there inside Riley’s head for the roller coaster of it all. Joy is thrilled to learn new things and make new friends. Disgust is grossed out by the grungy state of the Oozma Kappa house. And Fear is working overtime, even while interacting with sunny monsters like Squishy and Art.

Tagline: Majoring in fun, with a minor in frights. 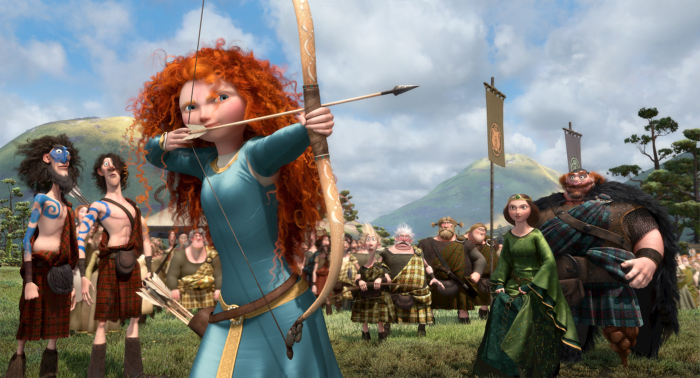 The magical woods where Princess Merida and her clan have dwelled for centuries have deteriorated into a dystopian wasteland, ravaged by violence, poverty, and disease. Hey, it happens even to the best of Young Adult heroines. But there’s a way Merida can help save herself, her family, and ultimately her people: by taking part in a survival competition where her archery skills will just happen to come in handy. Sound vaguely familiar? It does to Katniss Everdeen, too. Now that she’s helped restore peace to Panem by winning the Hunger Games, Katniss is bored. But when she hears about Merida and all the hype that’s building for the competition, Katniss (voiced by Jennifer Lawrence, of course) knows she must turn this already headstrong young lady into the fiercest warrior she can be. She grabs her bow and arrow and sets out across time and scape to medieval Scotland. Also tagging along for the adventures is Merida’s mom, Queen Elinor, who finds that turning into a bear every once in a while is actually quite helpful during these troubled times. Think of it as a girl-power version of Creed – and expect plenty of training montages.

Tagline: The Hunger Games: They can be a real bear.

UP, AGAIN: THIS TIME, WITH DUG 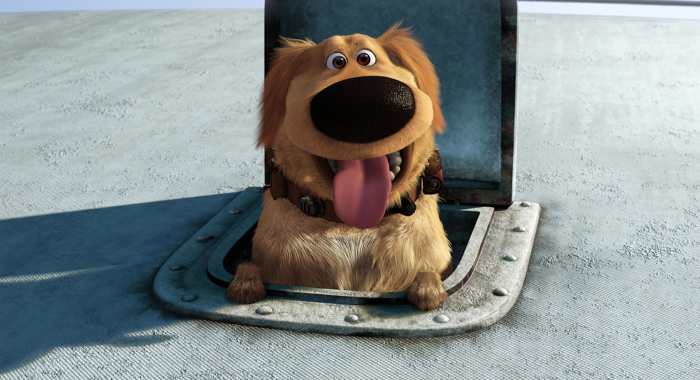 Up remains one of Pixar’s loveliest films, with a montage set to Michael Giacchino’s beautiful score that will leave you sobbing in a pile of big, fat tears. But it also features a hilarious scene-stealer in Dug, the Golden retriever who wears a special collar that allows him to voice all of his random doggie thoughts. Dug got his own short film in 2009 when Up came out, but five minutes is not nearly enough for this buoyantly joyous character. He needs his own full-length feature. It doesn’t even have to have a plot. It can just be Dug, wandering around Paradise Falls, commenting on everything he sees – and, of course, getting distracted every time he sees a squirrel. Give this movie all the Oscars now.

Tagline: Every dog has his day. This day is Dug’s.

COMEDIANS IN CARS GETTING COFFEE 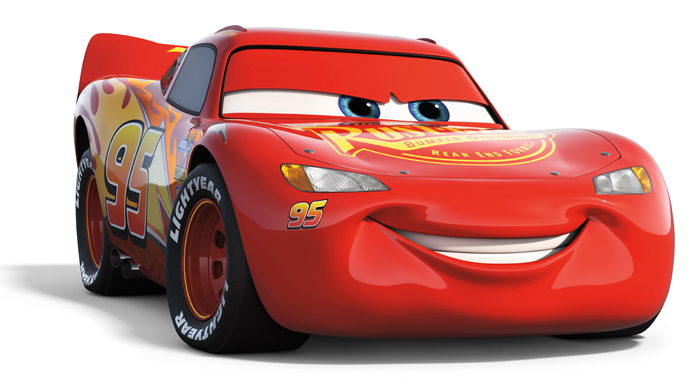 The Cars movies went downhill fast after the 2006 original. Granted, they always seemed intended more for very little kids than the rest of the films in the Pixar pantheon, which consistently manage to function on a variety of levels at once for every possible viewer. But by Cars 3 last summer, which sits at the low end of the Pixar canon at 68% on the Tomatometer, the franchise really seemed to have run its course – creatively, that is. The merchandising possibilities are still endless. But there’s a way to breathe life back into the series again: By crossing it with Jerry Seinfeld’s Comedians in Cars Getting Coffee. This would be an animated version of Seinfeld’s online show. Each week, he climbs in behind the wheel of a different Cars character: Lightning McQueen, Mater, Luigi, Sally, etc. He drives around in them a bit, enjoys a little banter, grabs a cup of coffee, and then heads back to Radiator Springs. Seinfeld could even do two different versions of each episode: one for kids, where he’s interacting with the characters, and one for adults where he’s ad-libbing with Owen Wilson, Larry the Cable Guy, and the rest of the cast. It would be a show about nothing that everyone would want to watch. 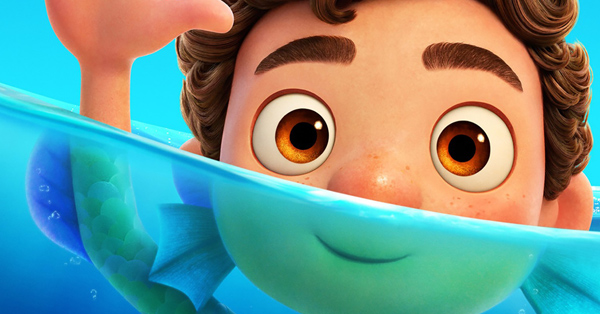