Today’s Ketchup brings you eleven headlines from the world of film development news, covering stories from the last few weeks (because of the holidays), such as G.I. Joe, Halloween, The Merlin Saga, and Quentin Tarantino’s Star Trek.

DISNEY’S MERLIN SAGA MIGHT BE DIRECTED BY RIDLEY SCOTT 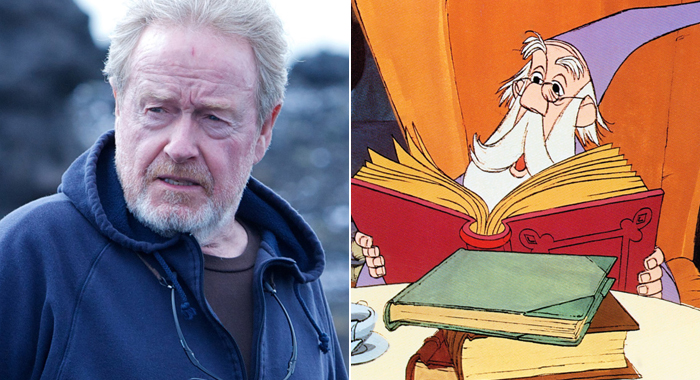 When Disney officially acquired the 20th Century Fox film and television assets for $52.4 billion late last year, much of the emphasis was on either the potential of X-Men joining the Marvel Cinematic Universe or Disney acquiring properties like The Simpsons, Avatar, Die Hard, etc. However, because of Fox’s longstanding relationships with various directors and producers, another implied result was that some of those filmmakers might start making films for Disney as well. Just weeks later, it appears that’s exactly what’s happening. Ridley Scott (Alien, Gladiator, Blade Runner) is now in talks with Walt Disney Pictures to direct their adaptation of The Merlin Saga books by author T.A. Barron. Rather than focusing on future characters like King Arthur and Lancelot, The Merlin Saga (as the title suggests) tells the story of the sorcerer Merlin when he is a young adventurer. If Ridley Scott does sign on, it’s expected The Merlin Saga (or at least, the first film in the series) could be Ridley Scott’s next film as director. This is just one of two Merlin-related projects Disney is developing, along with their live action remake of Disney’s 1963 animated film The Sword in the Stone.

It was only a month ago that the spectacularly surprising news broke that Quentin Tarantino (Inglourious Basterds, Django Unchained) was considering a Star Trek movie for what might be his last film before retirement. Some stories like this disappear as quickly as they are reported, but this one seems to have traction. Tarantino met recently with a group of screenwriters to discuss his pitch (which reportedly involves time travel), and it appears that the frontrunner to land the job is Mark L. Smith. Smith’s previous credits include the bear attack epic The Revenant, Joe Dante’s The Hole, and the 2007 “torture porn” release Vacancy, all of which line up with Tarantino’s stated intention of delivering the first-ever R-rated Star Trek movie.

The week after the surprising box office showing of the IT remake, we learned that Jamie Lee Curtis will be returning in this October’s new Halloween (which ignores the continuity of the sequels). This week, it was revealed that director David Gordon Green (Pineapple Express, Your Highness) is also bringing back actor Nick Castle, who originally played “The Shape” (AKA Michael Myers) in the original Halloween. Castle is now 70 years old (he directed The Last Starfighter), so he will be assisted by stuntman James Jude Courtney who had already previously been cast as Michael Myers.

Director Rian Johnson has been receiving staunch criticism from some Star Wars fans, but as it turns out, George Lucas had (somewhat) similar plans. We’re referring here to what Lucas might have done with Episodes VII (The Force Awakens), VIII (The Last Jedi), and the upcoming Episode IX if he hadn’t dropped out when Disney acquired Lucasfilm. In the new book Art of Star Wars: The Last Jedi, it’s revealed that George Lucas planned for Episode VIII to depict “an older Luke Skywalker training a new disciple named Kira (who was later renamed Rey). The idea was that, 30 years after the fall of the Empire, Luke had gone to a dark place and secluded himself in a Jedi temple on a new planet.” And that, at least, is (partially) what Rian Johnson depicted in Star Wars: The Last Jedi. Well, that and showing us where Aunt Beru’s blue milk might’ve come from.

The Star Wars movies are usually promoted for months in advance of release, but the prequel Solo: A Star Wars Story releases in just over four months (5/25/18), and we haven’t seen much from it yet at all. That’s obviously going to change soon (the Super Bowl on 2/4/18 is a safe bet), but until now, we’re still just getting random bits and pieces. This week, super-serious actor Christian Bale confirmed that he had been in talks to co-star in Solo: A Star Wars Story, playing the character that went to Woody Harrelson instead. Bale not only stated that he has been a lifelong Star Wars fan (and previously worked with Lucasfilm boss Kathleen Kennedy on Empire of the Sun), but that he “hope[s] there will be future discussions.” So, the chance is still out there that Christian Bale could yet co-star in a future Star Wars movie.

5. WAR FOR THE PLANET OF THE APES DIRECTOR LEAVING FOX FOR NETFLIX

This story might seem a bit “inside baseball” (and/or too “corporate”), but the possible ramifications do connect to things fans care about. Matt Reeves, the director of the two most recent Planet of the Apes sequels (and still attached to direct The Batman for Warner Bros.), has moved his production company from 20th Century Fox to Netflix. What’s interesting here is that this might be an example of a director formerly associated with Fox who is now moving elsewhere because of the recent Disney/Fox deal (though it should be noted that’s pure speculation at this point). No new titles under Netflix have been revealed yet, and Reeves’ company will continue to develop the titles Mouse Guard and The Care and Feeding of a Pet Black Hole (for Fox Animation).

In the weeks leading up to the end of each year, most of the studios typically send out promotional materials for the incoming year, and sometimes we learn of new release dates for projects further out. There may be more yet to come (since we’re only 5 days into 2018), but thus far, the studio with the biggest announcements has been Paramount Pictures, which is looking to recover from a weak 2017 in which it came in at #7 in box office share. Paramount has announced dates for four movies in partnership with the Hasbro toy company: G.I. Joe (3/27/20), Micronauts (10/16/20), Dungeons & Dragons (7/23/21, recently acquired from Warner Bros), and an untitled Hasbro film (10/1/21). G.I. Joe is expected to be a fresh new reboot (possibly more directly based on the 1980s toy line), and is claiming the weekend before an untitled DC Comics movie and one of Disney’s live-action fairy tales (both on 4/3/20). Last week, Paramount also revealed our first glimpse of the 1980s-set Bumblebee prequel (12/21/18), showing the Transformer in his original VW “bug” form.

Dwayne Johnson’s reboot Jumanji: Welcome to the Jungle has proven itself at the box office since it opened. Add in Disney’s Jungle Cruise and the partially jungle-set video game adaptation Rampage, and Dwayne Johnson has clearly established himself as something of a king of the “jungle movie.” This all sort of started with 2003’s The Rundown and the sequel Journey 2: The Mysterious Island. These other successes seem to have been bad news for fans hoping for Journey 3, however, as Johnson confirmed this week that Journey 3 is no longer in development. Answering a fan’s question on Twitter, Johnson replied, “Unfortunately, I have no plans to make another Journey movie. My goal to make Jules Verne’s From the Earth to the Moon became a real challenge to crack creatively.” We’re calling this a Fresh Development because of the Rotten 43% Tomatometer score for Journey 2: The Mysterious Island.

ROTTEN IDEAS OF THE WEEK?

2. WILL FUTURE DC COMICS MOVIES BE SPOOKY LIKE THE CONJURING?

Although Warner Bros.’ DC Comics films like Suicide Squad and Justice League did well at the box office, the perception is still out there that these films could have been better (26% and 40% on the Tomatometer, respectively). Ostensibly, the hope is that better films will also do even better box office (like the Certified Fresh Wonder Woman did with a 92%). With that in mind, Warner Bros. is shaking up the corporate leadership of its DC Films division, and the new boss is one Walter Hamada, who comes to DC from WB’s New Line Cinema subsidiary, where he was in charge of horror hits like IT and The Conjuring cinematic universe (Annabelle, etc). This has quickly led to speculation that some of the DC Comics projects that will receive greenlights will be on the spookier, “scary” side. That’s great for comics adaptations that make sense as horror films, but what about traditional superhero movies? Are they in trouble at Warner Bros.?

Although at least one source has proclaimed Bright to be the “worst movie of 2017,” Netflix appears to be quite content with the results (Rotten at 28% on the Tomatometer). Will Smith starred in the gritty fantasy/action movie as a cop living and working in a modern world where orcs, elves, and dragons coexist alongside humans. Netflix is moving forward with a Bright sequel to be written and directed by David Ayer (Suicide Squad, Training Day), with the first film’s screenwriter Max Landis (Chronicle) not returning. Despite the horrible reviews, Bright is estimated to have been watched by 11 million people its first weekend, which, if they had been box office tickets, may have been worth as much as a $98 million opening.