Them! and The Keep get remakes, Stan Lee gets a documentary, and updates on Avatar 3, the Community movie, and DC's superheroes.

This week’s Ketchup brings you more headlines from the world of film development news, covering such titles as Avatar 3, Community, Gladiator 2, and Them! 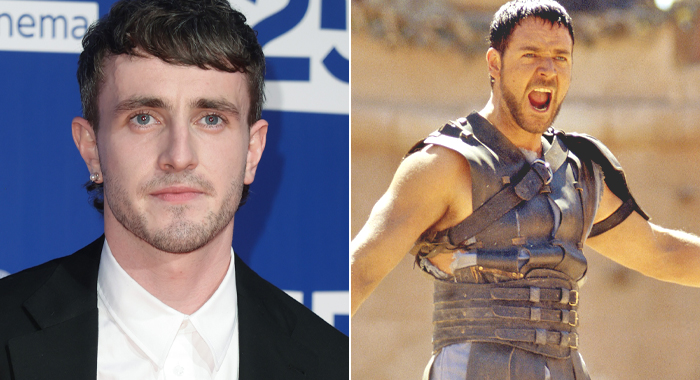 The idea of a sequel to the 2000 Roman epic Gladiator (Certified Fresh at 79%) has been floating around since almost just after the movie came out, despite its rather conclusive ending for two of its lead roles (apologies for the 23-year-old spoiler). There have been many stories about a possible sequel, including a period when Russell Crowe’s Maximus would have been resurrected throughout history. Ultimately, all of those previous ideas were rejected by director Ridley Scott in favor of a new screenplay which screenwriter David Scarpa (All the Money in the World) finished in 2022. Scott is currently deep into postproduction on his historical biopic Napoleon (starring Joaquin Phoenix), but the prolific director is already casting up the Gladiator sequel, with the news late this week that the lead role has gone to Irish actor Paul Mescal (Normal People, Aftersun). Mescal will not be taking over the role of Maximus, but rather will be playing the adult version of Lucilla’s son, Lucius, who was a young child in Gladiator (and possibly/probably Maximus’ son). There is currently no release (or confirmed title) for the Gladiator sequel, but it’s unlikely to be anytime sooner than 2024 or 2025.

As the only tentpole movie released in the last two months of 2022, Avatar: The Way of Water (Certified Fresh at 77%) was also regularly reported on in the last few weeks as its global box office topped $1 billion (and counting). Avatar (forests/earth) and Avatar: The Way of Water (it’s right there in the title) both obviously represented traditional elements, so it shouldn’t have been surprising to hear from James Cameron that the theme of Avatar 3 (12/20/2024) will be fire, as the film introduces the Na’vi tribe called the “Ash People.” Avatar 3 will also introduce new characters played by Michelle Yeoh (as a human), Oona Chaplin, and David Thewlis (they’re both playing Na’vi). Cameron also clarified that the reason he filmed scenes of both Avatar 3 and Avatar 4 as soon as possible was to avoid the “Stranger Things issue” with the younger cast members outgrowing their characters’ ages. Finally, James Cameron confirmed on Friday that Avatar: The Way of Water has met the profit benchmarks it needed to in order for the greenlight to be given, saying, “I’m gonna have to do the sequels.”

2. WB/DC CLARIFIES THE FUTURE OF ITS SUPERHERO CHARACTERS

In December, the news broke that many DC Comics movie characters would either be recast (Superman) or just not return (Dwayne Johnson’s Black Adam) under the new DC Studios leadership of James Gunn and his partner Peter Safran. The fate of other superheroes and the actors playing them was not as clear, but recent stories have indeed cleared up the issue (for now). Zachary Levi, the star of the upcoming Shazam! Fury of the Gods (3/17/2023) tweeted that fans shouldn’t believe everything on the Internet, saying “We all Gucci.” The situation with Gal Gadot as Wonder Woman was half-clarified, with Gunn saying Gadot was not “booted” from the role, though there is speculation that he  might have actually meant that Gadot quit (or she’s still playing Wonder Woman, but Gunn’s not prepared to announce the new project she’s in). Finally, there’s Ezra Miller as The Flash (6/16/2023), who Warner Bros. and DC Studios apparently have not yet abandoned, despite his recent streak of run-ins with the law. All of these questions may yet be resolved later this month when Gunn and Safran make a promised announcement about some of the films in their new 10 year plan for DC Studios.

3. DON’T EXPECT PAINTBALL OR DUNGEONS & DRAGONS IN THE COMMUNITY MOVIE

Showrunner Dan Harmon is preparing to make good on the promise that the fan-favorite series Community (Fresh at 88%) would get “six seasons and a movie,” with only the movie part yet to be realized. Fans expecting the Community movie to play like a “greatest hits record” might want to adjust their expectations, though, as Harmon revealed that a few of the show’s most beloved themes will not be included. Notably, he clarified there won’t be any paintball sequences, saying, “You’re running around with guns in a school, which was never a good idea on TV, even back then.” We also won’t be seeing Ahmed, Troy, and friends playing any more Dungeons & Dragons, as Harmon said, “Or we’d play Dungeons & Dragons for 90 minutes. I kinda gotta rule that out – maybe a better writer wouldn’t.” There isn’t a release date for the Community movie yet (though it will probably be in either 2023 or 2024), and it will most likely debut on Universal’s Peacock streaming app.

4. MICHAEL GIACCHINO TO REMAKE THE GIANT ANTS OF SCI-FI CLASSIC THEM!

In 1954, international nuclear paranoia reached a new level both in the real world and on the silver screen, starting with the tragic case of the Lucky Dragon 5 fishing boat and the release of two different atomic-themed giant monster movies, Japan’s Gojira (Certified Fresh at 93%) on October 27 and the giant ants of Them! on June 19. Warner Bros. has now finished a trilogy of movies rebooting Godzilla (Certified Fresh at 76%) and his Toho cousins in Godzilla: King of the Monsters (Rotten at 42%) and Godzilla vs Kong (Certified Fresh at 75%), and a sequel to the latter is now in the works for 2024 as well. Now, Warner Bros. is setting its sights on rebooting the giant ants of Them!, with the directing job going to composer Michael Giacchino in his feature film directorial debut after just recently directing the Marvel Disney+ special Werewolf by Night (Certified Fresh at 90%). Giacchino said of his vision for Them!, “The current version of Them! is about immigration, and to tell a story about the subject through a lens of this insane science fiction monster movie.”

5. THE WALKING DEAD DIRECTOR GREG NICOTERO TO REVIVE THE KEEP

This week’s two big horror/sci-fi remakes/reboots represent the opposite ends of a fan theory that goes something like, “The best candidates for remakes are movies that were flawed the first time.” The giant ants monster movie Them! (Certified Fresh at 93%) is widely considered one of the classics of the genre, and then there’s Michael Mann’s 1983 thriller The Keep (Rotten at 44%), which was full of over-stylized atmosphere and an example of style-over-substance. Having said that, the concept of Nazis messing around with the ancient magic locked away under a spooky mountain sounds on paper like a great movie premise. The Keep was based on a novel by author F. Paul Wilson, and recently, Wilson revealed that he has licensed the rights for a remake to FX designer-turned-director Greg Nicotero, whose directing credits include TV’s The Walking Dead (Fresh at 79%). Nicotero’s The Keep is just getting started, so it will probably be at least a few years before we see what he has planned for the reboot.

Moving right along from The Keep reboot, the next story actually involves one of the actors who starred as an evil Nazi in The Keep, Gabriel Byrne. The Irish actor is the latest to be cast in the John Wick spin-off called Ballerina, starring Ana de Armas as the title character. Ballerina will feature both actors reprising their John Wick roles, like Keanu Reeves, Ian McShane, Anjelica Huston, and Lance Reddick, as well as new additions like Norman Reedus, Catalina Sandino Moreno, and now Byrne. There is no release date for Ballerina yet (it will probably be sometime in 2024), but the next movie in the franchise, John Wick Chapter 4 comes to theaters in just a few months on March 24, 2023.

Comic book fans will probably never really stop debating the push-and-pull between early Marvel Comics artists like Jack Kirby and Steve Ditko and their writing and editing partner and co-creator Stan Lee, but probably everyone can agree that Marvel Comics as we know it probably wouldn’t even exist if it hadn’t been for Lee’s decades-long steering. On December 28, 2022, which would have been his 100th birthday, Disney+ released a teaser video that announced that there will be a documentary feature on the streaming app in 2023 called Stan Lee, telling the amazing life story of the man who was at least partially responsible for most of Marvel Comics’ early and greatest characters like The Avengers, Fantastic Four, The Incredible Hulk, Iron Man, Spider-Man, Thor, and X-Men.

8. DAVE BAUTISTA TO RETIRE FROM THE MCU AFTER GUARDIANS OF THE GALAXY VOL. 3

The first teaser trailer for Guardians of the Galaxy Vol. 3 (5/5/2023) seems to tease a Rocket-centric story that could mean the end for everyone’s favorite galactic raccoon space bandit. The comments this week from one of Bradley Cooper’s co-stars seem to indicate that at least one of the other Guardians might also be wrapping up his story. Dave Bautista, who plays Drax in the MCU, has said that he is looking to take on “more dramatic roles” and that he is done playing Drax in the MCU after Guardians of the Galaxy Vol. 3 (without getting into the narrative explanation of how that would be resolved). Saying that he doesn’t want Drax to be his legacy, Bautista called the character, “a silly performance.” In a separate interview soon after, Bautista also said that he “never wanted to be the next Dwayne Johnson,” and that “I just want to be a good f—ing actor.” In addition to GotG3, Bautista will next star in M. Night Shyamalan’s Knock at the Cabin (2/3/2023), and later this year, he will reprise his very unsilly character in Dune: Part Two (11/3/2023).