The Oscar nominee reveals why he took on another morally driven investigator for his first post-Endgame role.

It’s been a while since Mark Ruffalo starred in a non-MCU movie – three years in fact. In his first post-MCU and post-Endgame role, the three-time Oscar nominee plays corporate attorney Robert Bilott in the true-to-life thriller, Dark Waters, which tells the story of the lawyer’s investigation and ultimate exposure of a major West Virginia pollution scandal involving mega-corporation DuPont. Directed by Todd Haynes (Carol, Far From Heaven), the movie is Certified Fresh, and critics are praising Ruffalo for his turn as the dogged attorney. In the lead-up to the film’s release, Ruffalo sat with us to go deep on how he came to embody real-life hero Bilott, from the time he spent with him on- and off-set to why he felt compelled to tell his story. 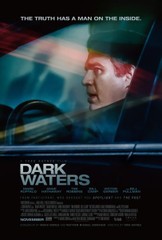