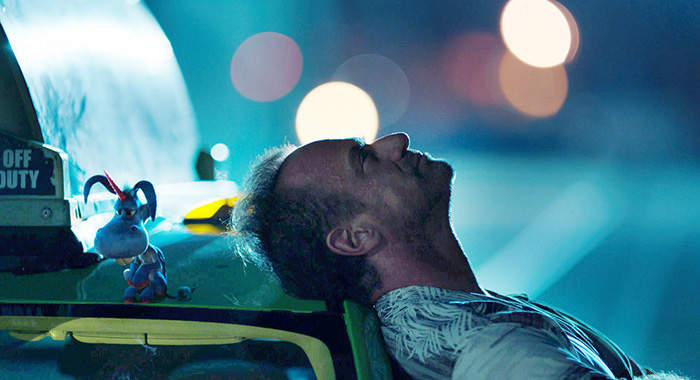 Christopher Meloni isn’t sure if it takes courage to be part of Syfy’s Happy!

The series, in which he stars as disgraced cop–turned–hit man Nick Sax, actively courts the wildest things one can put on broadcast television. For starters, Nick can see his daughter’s imaginary friend, Happy (Patton Oswalt). In its first season, the program introduced a consummate hit man lacking for genitals, a child-snatching Santa who smelled of fecal matter, a corrupt children’s entertainer who services the perversions of the world’s elite, and the sister of a mafia don who traded on his fame to star in a reality television program. But in its eight episodes, it also managed to tell a heartwarming tale of a father learning about his daughter — just in the most blood-soaked and urine-stained way possible.

And while Meloni is unsure if starring in the show is a courageous act, he told Rotten Tomatoes ahead of the series’ second season that a show like Happy! has to be “every actor’s dream.”

“I think the circumstances are so outlandish. Most actors relish to be in that environment,” he explained.

The show’s broad and hyper tone, the result of Happy! comic book writer Grant Morrison and Crank co-director Brian Taylor joining forces, offers a chance to “expand whatever your repertoire is” and build on “whatever gifts you have.” For Meloni, that means going as broad as he can in some scenes, truthful when appropriate, and bizarre when it might otherwise be the least likely choice in a given moment.

“There really is no wrong answer,” he said in regards to the sorts of performances both he and the cast bring to the show.

To some, Nick Sax seems to be a major departure from Meloni’s signature role as Detective Elliot Stabler on Law & Order: Special Victims Unit. But those who follow the actor outside of his long tenure on that series will recognize aspects of Nick from some of the actor’s others roles.

“Even when I was doing the Law & Order gig, I always relished [my parts] in Wet Hot American Summer or Harold and Kumar,” he said. In both films, Meloni played memorable roles like an unhinged camp cook fond of his sweater and a truck driver interested in a foursome. But even those characters might look askance at Nick Sax. Once a decorated detective like Elliot Stabler, Nick got in with the Scaramucci crime family, started an affair with his partner and eventually lost his family when all of his secrets came to light. Deciding he was happy in the gutter, he spent almost a decade as a slovenly hit man until his latest contract made him a target for New York’s scummiest people.

The story expands greatly on the tale told in the comic book by Morrison and artist Darrick Robertson — like the extra problems “Blue” Scaramucci (Ritchie Coster) faced in the first season and his connection to Sonny Shine (Christopher Fitzgerald), the seeming big bad created for the television series — and omits the finality of the original comic. According to Meloni, it was a choice Morrison and Taylor made early on while working out a way to expand the four-issue comic book into both an eight-episode television show and a continuing story of debauchery at the holidays.

“[The comic] really centered on Happy and Nick Sax,” he said. “So it was just a matter of fleshing out characters and then saying, ‘What is this world?’ And then with Grant, he actually gave us the cornerstone from which to build and expand.” 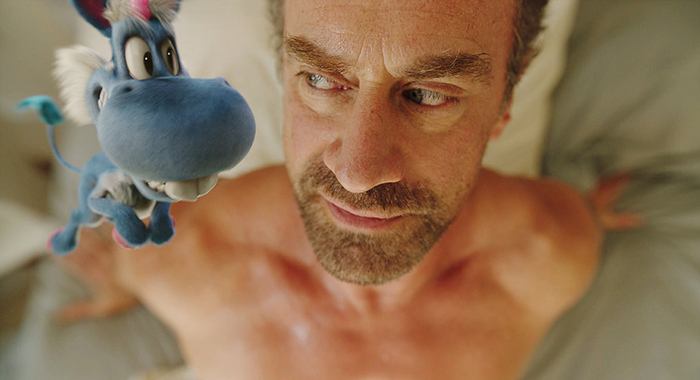 That cornerstone may have something to do with Blue’s last scene in season 1, but Meloni was careful to say “we haven’t touched on it yet.”

Meanwhile, Nick faces, essentially, a new life for which he is not prepared.

“[He’s] trying to his best to mimic how normal human beings behave and how to operate in a normal life,” Meloni explained. “All that while being sober … he’s having a difficult time.”

Nonetheless, Nick is trying to turn his life around for the sake of his daughter Hailey (Bryce Lorenzo), who lost touch with Happy at the end of the first season. As Meloni put it, Nick feels he has to “be a straight arrow and be perfect, to not be the debauched [guy] that everyone says.” It will not be an easy task, as viewers will discover in the season 2 premiere.

And even as Nick tells Happy he will stay away from violence, violence always finds Nick. Meloni, however, insists it is not his fault.

“Have you ever hung out with someone that bad things happen to? You’ll go, ‘That person is a klutz,’ right? Or that person that gets into a lot of car accidents or always is hurting themselves? That’s what Nick Sax is. He is a magnet that attracts bad s—,” the actor explained. 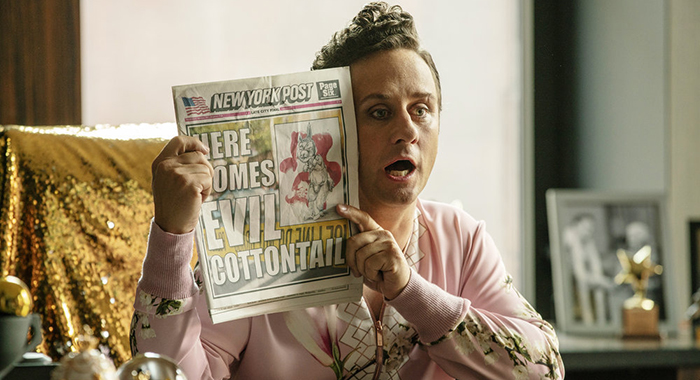 Nick’s magnetic pull goes into overdrive with the start of the Easter season. While not exactly the commercialized holiday Christmas is — and less of a target for jokes about presents, decorations, and the like — the early episodes of the season revolve around a plan to make Easter celebrations more like a Christmas II.

And as Meloni noted, Easter is “one of the more bizarre things that we have attempted to commercialize. …It’s the Resurrection of our Lord and Savior for some people, and we celebrate it with Easter bunnies and chocolate eggs — which is an odd collision of competing ideas.”

Easter also means a new focus on certain Catholic ideas, as viewers will see early in the premiere episode. And although Meloni said the intention was never to “take a swipe at some organization,” Happy! cannot help but send up the power bases in the world. The greed and hypocrisy of media conglomerates and massive organizations gives the show a darker undercurrent even as it’s meant to make you laugh. With that in mind, Meloni added the inherent humor of both Easter and the wider send-up of commercialized holidays “played well into our characters, like Sunny Shine.”

The character, a sort of demented Blue’s Clues host on party drugs, emerged in the first season as the real source of pain in the characters’ lives — not that they realized it before he could escape prosecution. The character’s growing status as the big bad of Happy! was the result of Fitzgerald’s work in the first year. That organic process also led to expanded roles for Lorenzo, Coster, Medina Senghore (who plays Hailey’s mother, Amanda), Patrick Fischler (as the genital-less killer Smoothie), and Lili Mirojnick as Nick’s former partner, Meredith McCarthy.

“Just about every actor on the show got expanded by virtue of the work they get first season,” Meloni explained. “Season 2 is really going to delve into everyone’s backstory and obsessions, desire, home life, and history.”

It is also going to feature crazy dance numbers, Anne-Margaret as a former star of questionable 1970s cinema, and Sunny’s wildest scheme to date. (Spoiler: It involves exploding nuns.) Does all of that require courage? Meloni still isn’t sure, but he’s happy to be part of it.