Oprah Winfrey wants to adapt The 1619 Project, Janelle Monáe wants to be the next Storm, and Jude Law might be the next Captain Hook. Plus, new roles for Tiffany Haddish, Kristen Bell, Leslie Jones, John Boyega, and Felicity Jones.

This Week’s Ketchup brings you more headlines from the world of film development news, covering such titles as Halloween Kills, Peter Pan & Wendy, and Wolfman. 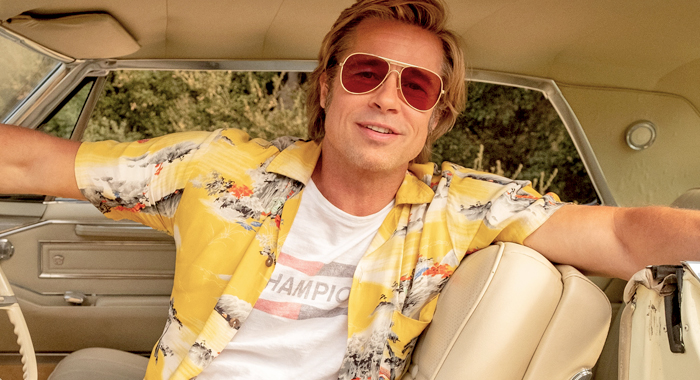 Brad Pitt has enjoyed steady success throughout his career, even as recently as last year, when his performance in Quentin Tarantino’s Once Upon A Time in Hollywood garnered widespread acclaim, but it’s been a little while since he appeared in a proper, traditional action film — unless, of course, you count his blink-and-you’ll-miss-it cameo in Deadpool 2. With that in mind, he’s now set to work with the guy who helped re-establish Keanu Reeves as an action star: David Leitch (John Wick, Atomic Blonde, and the aforementioned Deadpool 2). Pitt has signed with Sony Pictures to star in an action thriller called Bullet Train that will be directed by Leitch, whose most recent film was last year’s Fast & Furious Presents: Hobbs & Shaw (Fresh at 67%). Bullet Train will be an adaptation of the Japanese novel Maria Beetle by Kotaro Isaka and will tell the story of five assassins who find themselves on the same train from Tokyo, which undoubtedly leads to lots of shooting and stabbing and kicking and punching. Because, you know, action.

It certainly seems like there have been a lot of live action takes on J.M. Barrie’s Peter Pan in recent years, including films as 2003’s Peter Pan (Certified Fresh at 77%), 2015’s Pan (Rotten at 27%), this year’s Wendy (Rotten at 37%). One of the companies that has stayed out of the live-action Peter Pan business until this point has actually been the one that would’ve seemed the most obvious choice, which is Walt Disney Pictures. Disney’s 1953 animated Peter Pan is arguably the play’s most famous adaptation, and that film’s version of Tinker Bell became an icon for Walt Disney Pictures, used in various opening credit animations over the years. On top of that, Disney is very much in the ongoing process of adapting its most famous animated films into live-action ones. The live-action adaptation of Peter Pan will be called Peter Pan & Wendy, and it will be directed by David Lowery, who previously directed the live remake of Pete’s Dragon (Certified Fresh at 88%). We don’t yet know which young actors will play the title characters (or Tinker Bell, for that matter), but this week, the news broke that Jude Law is in talks with Disney to play the villain, Captain Hook. If he signs on, he will take on a role previously played by the likes of Dustin Hoffman (Hook), Jason Isaacs (Peter Pan), and Hugh Jackman (Pan).

Australia’s Leigh Whannell is a producer, director, and screenwriter who got his start collaborating on Saw with future Aquaman director James Wan in a career arc that most recently included Universal Pictures’ reboot of The Invisible Man (Certified Fresh at 91%), starring Elisabeth Moss. That film happened after Universal Pictures scrapped their previous “Dark Universe” plans for rebooting their classic monsters, which would have included Johnny Depp starring in The Invisible Man and rumors of Dwayne Johnson possibly starring in Wolfman. Despite the COVID-19 pandemic happening just as The Invisible Man was opening in theaters, the film was otherwise a financial success, so Univeral Pictures is moving forward with similar reboots, including Wolfman. Just about a month ago, the news broke that Ryan Gosling was the studio’s top choice to star in Wolfman, and it now appears that Gosling has indeed signed on, as Universal Pictures is in talks with Leigh Whannell about writing and directing Wolfman to continue the thread between The Invisible Man and their ambitious werewolf movie. Whannell and Gosling have reportedly wanted to work with each other “for some time.”

Last year, The New York Times Magazine began a new series called The 1619 Project, named after the arrival of the first ship of enslaved Africans to the coast of the colony of Virginia. Producer Oprah Winfrey is now collaborating with Lionsgate and The New York Times on a series of feature films and television projects that will be based on The 1619 Project. Journalist Nikole Hannah-Jones won the 2020 Pulitzer Prize for The 1619 Project, and she will be a key participant in the projects Oprah Winfrey has planned. It is not yet known which of the true stories documented in The 1619 Project will be adapted as feature films, but the Variety’s news item references titles like, “America Wasn’t a Democracy Until Black Americans Made It One” and “American Capitalism is Brutal: You Can Trace That to a Plantation.” The 1619 Project scope will reportedly include “multiple feature films, TV series, documentaries, and other cross-platform content for a global audience.”

Before winning an Academy Award for Best Picture for Green Book (Certified Fresh at 77%), director Peter Farrelly was probably best known for comedies like Dumb and Dumber and There’s Something About Mary. For his next film, Farrelly is returning to the 1960s setting of Green Book with an adaptation of the non-fiction book The Greatest Beer Run Ever, about a young man who traveled to Vietnam to reunite with friends who were soldiers in the war. The first actor to sign on for The Greatest Beer Run Ever a few weeks ago was Viggo Mortensen, who also starred in Green Book. This week, Mortensen was reportedly joined by Dylan O’Brien, one of the stars of MTV’s Teen Wolf (who’s speculated but not confirmed to be playing the lead role). For the female lead, producers are also reportedly “eyeing” Jojo Rabbit co-star Thomasin McKenzie, but she’s not signed yet.

5. TIFFANY HADDISH WILL TRAVEL TO AFRICA TO BE CROWNED HOMECOMING QUEEN

Once a separate Hollywood studio, the former DreamWorks SKG, co-founded by Steven Spielberg, has in recent years been divided a few times over, with the live-action production company now being called Amblin Partners (not to be confused with Spielberg’s own Amblin Entertainment). Some of the recent films produced by Amblin Partners have included First Man, Best Picture Oscar-winner Green Book, and ten-time Academy Award nominee 1917. Amblin Partners is now developing a comedy for Tiffany Haddish (Girls Trip, Night School) called Homecoming Queen to be written by Raamla Mohamed, a TV writer who’s worked on Scandal and Little Fires Everywhere. Haddish will star in and also produce Homecoming Queen, which is reportedly inspired by Haddish’s own experience traveling “to Africa thinking she was royalty, only to find out that that designation means something completely different there.” Other upcoming movies that share an African royalty theme include Eddie Murphy’s sequel Coming 2 America (12/18/2020) and Marvel’s Black Panther II (5/6/2022).

Most sites reporting on movie development news try to avoid stories that hew too close to “rumors,” but every once in a while, a big enough star will actively campaign for a role that it will inevitably become “a story,” even if there’s no deal in negotiation. The most recent example of this came just this week from singer and actress Janelle Monáe (Moonlight, Hidden Figures), whose horror film Antebellum is among those that would have originally been released in theaters if not for the COVID-19 pandemic. In a recent interview, Monáe revealed that one of the roles she hopes to take on is the mutant superhero Storm of Marvel’s X-Men, who has previously been played in film by both Halle Berry and Alexandra Shipp (in X-Men: Apocalypse). Monáe said she “brought it up” while talking to director Ryan Coogler (currently working on Black Panther II, scheduled for 5/6/2022). It’s worth noting that Marvel Studios has not yet announced when any of the X-Men, including Storm, will be introduced into the Marvel Cinematic Universe. (The connection to Black Panther II is that in the comics, King T’Challa eventually marries Storm.)

7. HALLOWEEN KILLS AND THE FOREVER PURGE DELAYED UNTIL 2021

The reality of the COVID-19 pandemic and the continuing scheduling delays have made reporting on such release date shifts nearly a non-story each week, but this week, Universal Pictures pushed four of their highest profile horror films back all at once. The reboot of Candyman, which had originally been scheduled to come out last month on June 12th, is now scheduled instead for October 16, 2020. Two other sequels previously scheduled for 2020 have instead been pushed back to dates in 2021: The Forever Purge on July 9, 2021 (one day shy of a year after its original July 10, 2020 date) and Halloween Kills on October 15, 2021. Producer John Carpenter took to Twitter to release this Halloween Kills statement confirming that the 2021 plans include IMAX screens, and also to give us our first teaser trailer for Halloween Kills. This shift also pushes Halloween Ends, which was originally slated to release on the date now occupied by Kills, back another year to October 14, 2022. Halloween Kills and Halloween Ends are both sequels to the 2018 sequel/reboot Halloween (Certified Fresh at 79%), which returned Jamie Lee Curtis to the franchise.

8. KRISTEN BELL AND LESLIE JONES TO BE COUNTERFEITING QUEENPINS

Hollywood remains in quite the transitional period as productions slowly attempt to resume activity during the pandemic. One feature film that is scheduled to start filming in Los Angeles in late 2020 is a caper comedy called Queenpins, inspired by the true story of the largest coupon counterfeit enterprise in U.S. history, led by three women who sold fake coupons that could then be turned in for items that were worth much more money. Queenpins will feature an ensemble cast, including Kristen Bell (Frozen, TV’s The Good Place) and Saturday Night Live star Leslie Jones as two of the ringleaders, as well as Vince Vaughn (Wedding Crashers, The Break-Up) and Paul Water Hauser (I, Tonya, Richard Jewell). Queenpins will be written and directed by the married team of Aron Gaudet and Gita Pullapilly, who made their feature film in 2013 with the independent film Beneath the Harvest Sky (Fresh at 62%), starring Game of Thrones’ Aidan Gillen (“Littlefinger”).

As recently as late May, one of the biggest casting news stories was that Cate Blanchett had signed on to star in the video game adaptation Borderlands, based on the popular “first-person shooter” franchise. Coincidentally (but possibly confusingly), we can also now report that an indie thriller called Borderland (singular versus the plural video game title) is now casting up with stars from a few popular recent films. These stars include John Boyega (Finn from Star Wars: Rise of Skywalker), Felicity Jones (Jyn Erso from Rogue One: A Star Wars Story), Jack Reynor (Florence Pugh’s apathetic boyfriend in Midsommar), and Jodie Turner-Smith (Queen from last year’s Queen & Slim). Reynor will play an Irish soldier whose pregnant wife is killed by John Boyega’s British SAS soldier during a border ambush. Borderland will be directed and written by brothers Tom and Charlie Guard (the latter of whom is also married to Felicity Jones), who made their feature film debut in 2009 with The Uninvited (Rotten at 31%), the poorly received American remake of the South Korean supernatural thriller A Tale of Two Sisters.