Michelle Yeoh, Tim Allen, Catherine Zeta-Jones and more took the stage to introduce all the new Disney TV projects, from National Treasure: Edge of History to a Star Wars show for Young Jedis.

Saturday afternoon at D23 Expo 2022 was the occasion for Disney Branded Television – the division producing programing for The Disney Channel, Disney Junior, and Disney+ – to get fans moving and tapping their toes during a two-hour presentation. The session was marked by several musical numbers (echoes of the High School Musical: The Musical: The Series performance in 2019 that opened Disney+’s first presentation), lots of cast introductions, and Raven-Symoné announcing her series Raven’s Home will be returning for a sixth season on The Disney Channel. But that is just one of the many series previewed or discussed during the panel. Here are some other highlights. 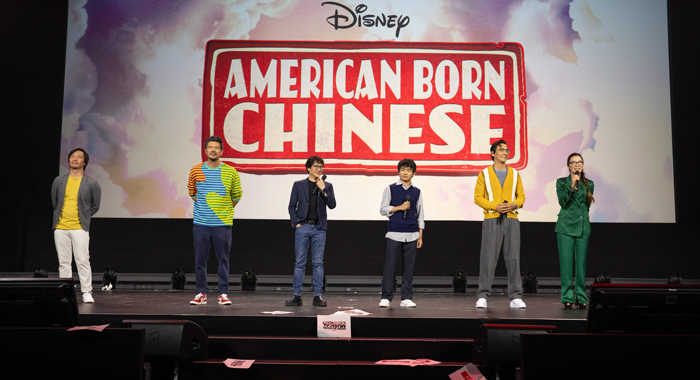 Based on the graphic novel by Gene Luen Yang, American Born Chinese comes from Shang-Chi and the Legend of the Ten Rings director Destin Daniel Cretton and writer/executive producer Kelvin Yu. It stars Ben Wang as Jin, a regular Chinese kid in an American high school who becomes involved in a supernatural adventure when he befriends Wei-Chen (Jim Liu), a new transfer student. The plot is itself based on Journey to the West, a 500-year-old tale popular in China and nearby regions. Daniel Wu takes on the role of Sun Wukong, the legendary Monkey King, while Ke Huy Quan plays fictional sitcom character Freddy Wong. Enigmatically, though, Quan had this to say when members of the cast took to the Hall D23 stage: “Fans of [the graphic novel] know any adaptation would not be complete without addressing an important issue. My character does not shy away from those uncomfortable moments. In fact, I was so nervous to play him that I made the creative team promise to hire me if no one else gives me a role [after this.]”

Quan’s Everything Everywhere All At Once co-star Michelle Yeoh also appears in the program. Although an earlier character breakdown described her as an “unassuming auntie,” she told the audience, “I play a character who jumps between worlds, and I jump in the air and kick the bad guys’ butts.” But in summing up the show, she said the program is really about “the mysterious journey to find yourself.” The eight-episode series is expected to debut in 2023.

Other series set for a Disney+ debut next year include the debut of the Marvel animated series Moon Girl and Devil Dinosaur – shortly after its Disney Channel debut on February 10 – a second season of The Proud Family: Louder and Prouder, and Muppet Mayhem. The latter follows the Muppets’ Electric Mayhem Band as they record their first album. Aiding them is Nora (Lilly Singh), a “driven, young music executive.” The series also stars Tahj Mowry and Saara Chaudry. And if the single The Electric Mayhem performed at the beginning of the panel, “Can You Picture That,” is any indication, the band may have a hit record and hit series before too long.

The Santa Clause And National Treasure Return In Disney+ Series 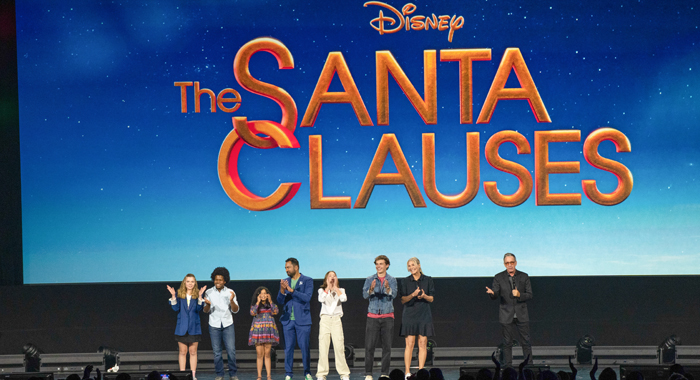 Closer to release, though, are a pair of Disney+ series based on a popular Disney film series of years past: The Santa Clauses and National Treasure: Edge of History.

The former finds Scott Calvin (Tim Allen) facing retirement and the search for a new Santa. Asked why he was ready to return to The Santa Clause world after 16 years, Allen joked, “because you people made me.” But he added the real reason lay in executive producer Jack Burditt’s willingness to answer his questions about the Santa Clause. “I’ve always wondered ‘why didn’t the elves worry when I showed up in the suit?'” he said. That one pondering led to so many other queries about the lore. “How come Mrs. Claus doesn’t have a first name? What is the history of Santa? Have there ever been any other human children at the North Pole? What’s the background of Santa?” These questions come to the fore as Scott prepares for his last days as Santa. And, as Allen teased, “Maybe Bernard shows up to explain.” Indeed, the elf played by David Krumholtz can be spotted in the teaser trailer for the series, which also includes Elizabeth Mitchell, Elizabeth Allen-Dick, Devin Bright, Austin Kane, Matilda Lawler, Rupali Redd, and Kal Penn. The first two episodes premiere November 16 on Disney+.

National Treasure: Edge of History returns to the world where historical items hide deep conspiracies and treasure seemingly waits to be unearthed everywhere across the globe. This time, though, a new set of characters led by Jess (Lisette Olivera) – a resourceful DREAMer in search of answers about her family – head out to uncover a truth about the past and save a lost Pan-American treasure.

“Fans of the franchise will not be disappointed,” co-star Catherine Zeta-Jones said as the cast made their introductions. “We may be a brand new cast, but you will see some familiar faces.”

Olivera added, “We go to the Alamo, Graceland, and some other fun surprises. You might even learn a bit more about what’s on ‘Page 47.'” The series debuts with its first two episodes on December 14.

In the unscripted space, the division announced three new reality series heading to the service in the near future: winter competition event series Best in Snow, hosted by Titus Burgess; the docu-series Pentatonix: Around the World for the Holidays, which sees the a cappella group working to find inspiration for their annual holiday album; and The Hip Hop Nutcracker, a “modern re-imagining of a holiday classic that fuses the worlds of hip-hop and classical music.” Each will debut in the 2022 holiday season. Additionally, Elton John Live – Farewell from Dodger Stadium will stream live November 20 on Disney+.

Further afield, Disney+ will also be the home of Percy Jackson and the Olympians, a series based on Rick Riordan’s successful series of novels. Riordan took to the Hall D23 stage to introduce the three young stars who will breathe new life into his key trio of characters.

Aryan Simhadri is Grover Underwood. According to Simhadri, the character is “the protector of the group and helps [his friends on] their journey.”

Leia Jeffries plays Annabeth Chase. She described the character as “the daughter of wisdom. She’s smart, she’s nice… but you’ve really got to impress her.”

Finally, Walker Scobell takes on the title role of Percy Jackson. Although he described the character as “funny, witty, sarcastic, [and] very hotheaded,” he got a big reaction from the audience when he vowed to “always try my hardest to bring Percy Jackson to life for all of you.”

Although the series is still on the more distant Disney+ horizon, a brief teaser offered fans a glimpse of Camp Half-Blood, the setting for the series. Well, once Grover manages to get Percy there. Then again, based on Percy’s own warnings in the trailer about being a half-blood – part human and part god – the camp may not be the paradise it seems.

Other programs coming to Disney+ in the more distant future include a second season of Doogie Kamealoha, M.D., the teen-geared film Prom Pact, and a fourth season of High School Musical: The Musical: The Series, which wraps up its current third season on September 14. 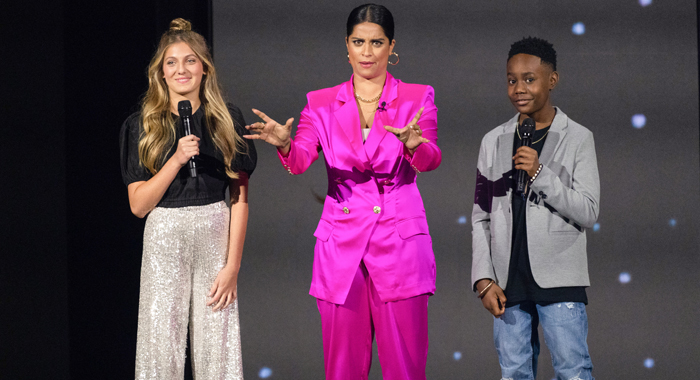 The Disney Junior domain is finally getting its own corner of the Star Wars galaxy. Star Wars: Young Jedi Adventures is the first Star Wars series aimed at preschoolers. It follows a group of Jedi Younglings as they help people in need, discover exotic creatures, clash with villainous pirates, train with their masters, and ultimately learn the valuable skills needed in order to become Jedi. Jamaal Avery Jr. lends his voice to Kai Brightstar, a Youngling aiming to be as great of a Jedi Knight as his hero and mentor, Master Yoda. Emma Berman, meanwhile, voices Nash Durango a gearhead from birth and young pilot who flies the team of Younglings to their missions.

Of course, based on the clip shown during the panel, we expect a Youngling called Nubs – a super-strong creature who resembles a teddy bear – will garner a lot of attention when the program debuts on Disney Junior and Disney+ in 2023.

Under Wraps 2 Picks Up The Pace With A Mummy Dance 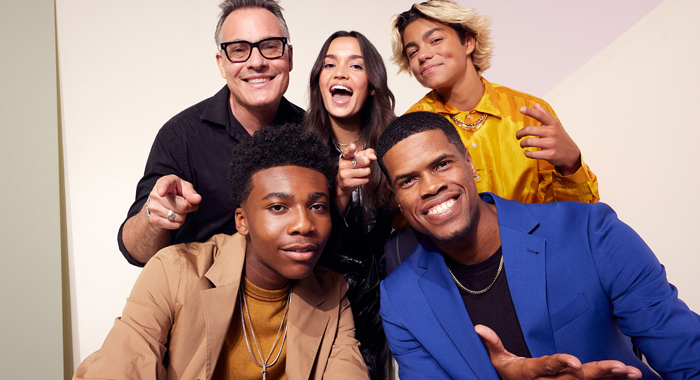 And though many of the musical numbers during the panel – including the Detroit Youth Choir’s performance in support of their upcoming docu-series Choir – were outstanding, none were as surreal as the Mummy Dance supporting Under Wraps 2. Debuting September 25 on The Disney Channel and on Disney+ September 30, the sequel continues Marshall (Malachi Barton), Gilbert (Christian J. Simon) and Amy’s (Sophia Hammons) story with their mummy pal Harold (Phil Wright). His best friend-turned-foe Sobek (T.J. Storm) returns to undead life with a 1000-year-old grudge to settle.

In other Disney Channel happenings, Descendants veteran China Anne McClain took to the stage to reveal the story will continue Descendants 4. “This time, it follows Rae, the daughter of the Queen of Hearts, and Chloe, the daughter of Cinderella,” she explained. “And I’m back, too,” she added, suggesting Uma still has something to resolve. The film is expected to being shooting early next year. 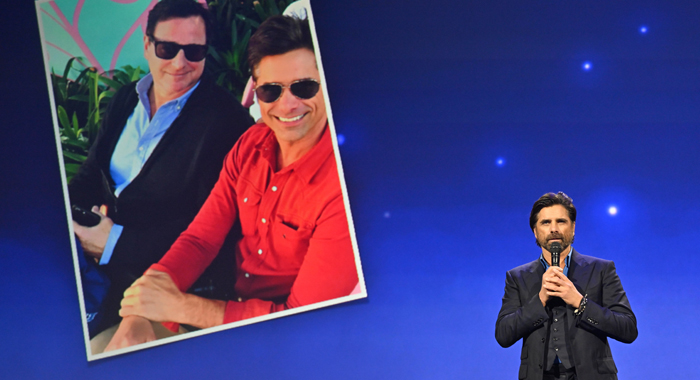 But for all the announcements and performances, the most emotional moment of the panel may have been John Stamos‘s tribute to the late Bob Saget. Ostensibly there to promote Big Shot‘s Season 2 debut on October 12 and a few other projects, Stamos instead took the time to reveal a picture of the two Full House stars taken during their last trip to Disneyland. “I don’t remember the rides we went on or what we ate. But I remember what the feelings were like… Every day I spent with Bob was my favorite day,” he said. “Bob never left anything on the table. So, make sure to tell everyone in your life that you care about them.”