The comedy, the drama, the crispy frybread — co-creator Sterlin Harjo and the Reservation Dogs cast break down what to expect in season 2 of the acclaimed series.

Reservation Dogs moves fast. The FX series from co-creators Sterlin Harjo and Taika Waititi, which follows four Indigenous teenagers laser-focused on getting out of small town Oklahoma in order to pursue the California dream out west, premiered its first season in September 2021. Now, less than a year later, season 2 has arrived, dropping its first two episodes on Hulu.

Between the streamlined production pacing and indie spirit, Reservation Dogs continues to be a win. And while Waititi’s name is attached to the program, this is Harjo’s project. Director, writer, executive producer, and showrunner, he continues his mission of delivering both laughs and heartfelt drama with his groundbreaking Indigenous-focused series.

What can we expect in these new episodes? From keeping the series’ aesthetic fresh, to expanding the writers room in exciting ways, Harjo and company discusses how the story progresses in season 2.

Here are six things you should know about Reservation Dogs season 2:

1. It splits up the core group and plays with tone. 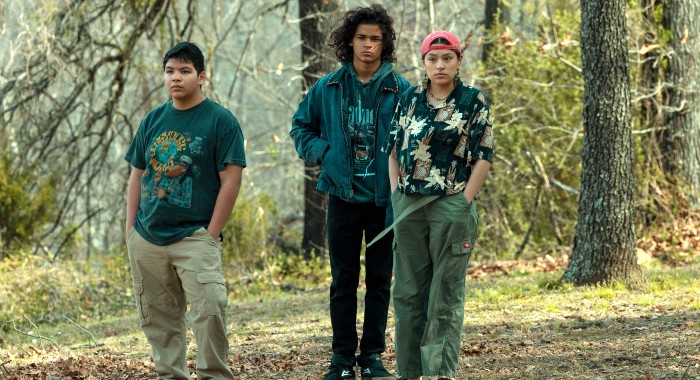 For Harjo, the biggest trap he did not want to fall into when mapping out the story for season 2, was repetition. In order to change things up, he decided to spit up the Reservation Dogs core characters and put them in peculiar situations where they can find their own separate identities in relation to each other and everything else going on in the story.

“I wanted it to feel disjointed,” he explained. “I felt like they needed to be in a different place, altogether — individually, mentally, and even physically. I needed something, stylistically, to feel different. Hopefully, the first two episodes feel that way. It was kind of like resetting this whole story again, and giving them a new journey to go on.”

2. It also explores the theme of moving away from a small-town home. 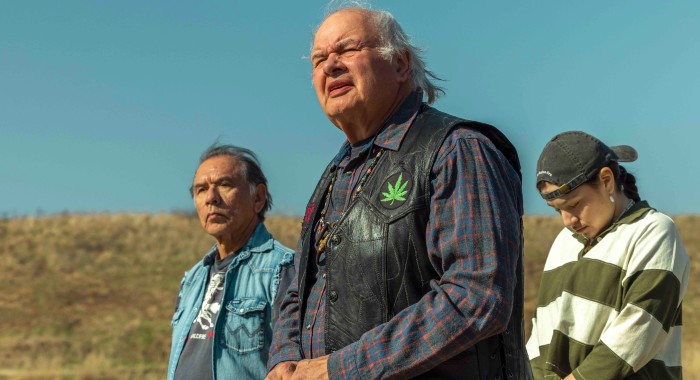 The first season found the crew doing whatever they could to finance their big escape to the far-off mythical land of California. But once those dreams started becoming an attainable reality, the concept of home took on a whole different meaning.

In season 2, Harjo explores that concept further — and it’s a topic that holds personal resonance for the show runner.

“It was really always hard for me,” he explained. “To this day, there’s a part of me that knows that I could have stayed and lived a certain life. And that would be OK. Some of that’s reflected in this show, that struggle of Do you leave? Or do you stay?”

3. Devery Jacobs adds staff writer to her list of responsibilities. 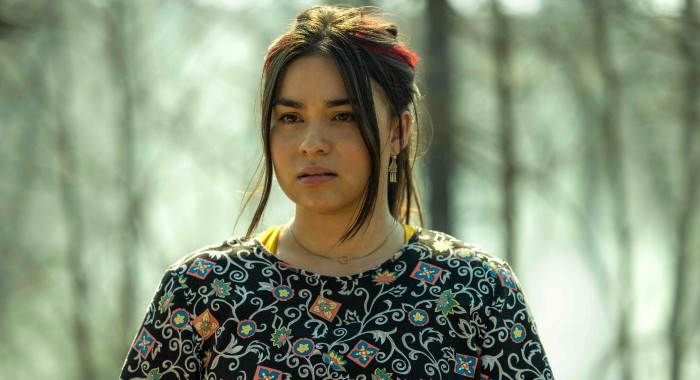 Jacobs doesn’t just want to be recognized for her acting work. She revealed during the panel that she’s a writer and director, as well, and has been making short films since 2016. For her, the next obvious step was to put her talents to good use in the Reservation Dogs writers room.

“Gearing up for the writers room of season 2, I was ready to assemble all my writing credits and get everything together,” she said. “And I was gonna really fight to get in the writers room. And then Sterlin was just like, Hey, you want to join?”

It’s one thing to join an all Indigenous writers room, and to continue representing her culture and create truthful stories. But to be able to do so, while being credited with her native first name, adds a whole new layer of meaning for Jacobs.

“To have my first name be included as a writer was important to me,” she continued. “Mainly, as an actor, I’m somebody who takes on different personalities. And when I’m able to contribute my voice as a filmmaker, and writer (in this case), and use my name Kawennáhere, which is my first name, and the name that my family all calls me, that just meant that, for me, it is signifying that it’s leaving a piece of my my heart and who I am in in the work that I’m creating.” 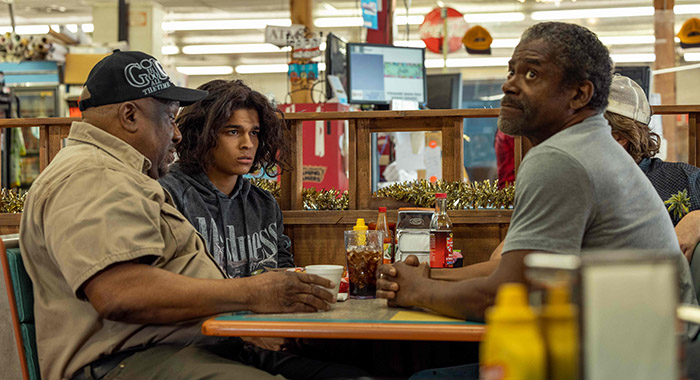 When Reservation Dogs was first greenlit by FX, the network gave Harjo eight episodes. He had a 10-episode first season planned out. Cuts had to be made, which meant that some storylines, specifically the ones at the crew’s favorite catfish restaurant, never got to see the light of day.

Two characters tied to that locale are owners Rob (Macon Blair) and Cleo (Darryl W. Handy) and, as Harjo explained, he’s thrilled to bring them back for more.

“I think people thought that the characters were done after the first season,” he said. “Having Rob and Cleo back … it’s funny because Rob and Cleo’s, the place that we shoot, is probably the furthest out from any location that we have, so it’s actually the hardest scene to shoot in our schedule. It’s always a little difficult trying to schedule a Rob and Cleo scene, but it was one of my favorite sets. Each season, I’m trying to figure out how to get back there. So we’ll definitely be back. We’ll definitely be back in that world.”

5. A Tom Petty inside joke became an important needle drop for the season. 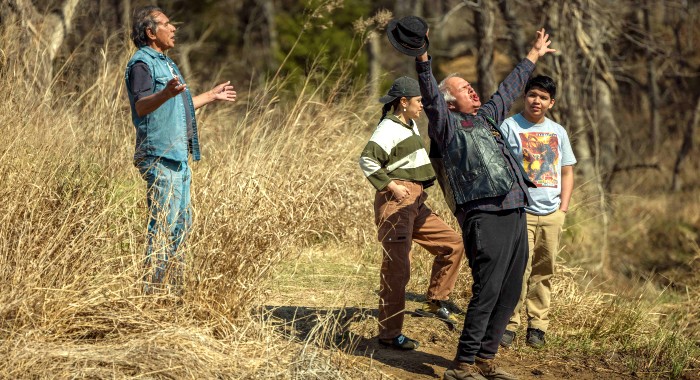 An integral scene in the new season features an epic needle drop: Tom Petty’s iconic song, “Free Fallin’.” Instead of spilling the episode details (you’ll find those out, soon enough), let’s discuss how the classic rock track made it into the show to begin with.

As Harjo explained, it all began as a joke over Zoom during the season 2 writers room sessions.

“For some reason, I kept playing that song,” he said. “I was singing it whenever we were stuck. I would just be strumming this thing the whole time. We were in the writers room, and I would be singing Free Fallin’ and it just became a joke, and I ended up just writing it into that, as the song of the day.”

Reservation Dogs carries with it a low-key, indie film vibe, which bore the question: How does a show like this afford the rights to a song like that? It all comes down to who you know, really.

“Apparently our music supervisor is friends with Tom Petty’s daughter and the Estate.” Harjo continued. “They’re fans of the show and made it pretty easy. I mean, obviously, iconic. Tom Petty. It’s pretty rad to have a song by him in the show.”

6. The Indigenous Easter eggs will continue to appear. 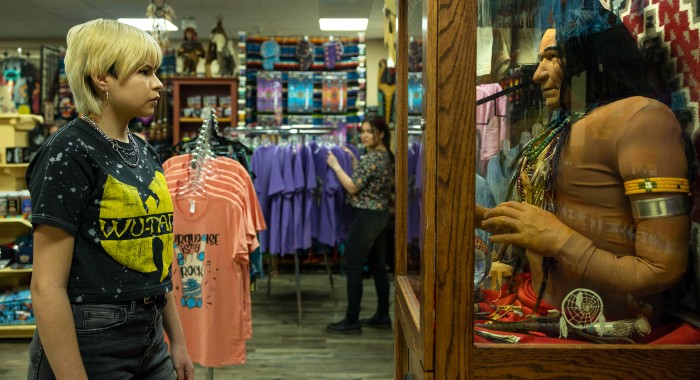 One of the details that has made Reservation Dogs such a success is its attention to detail and the cultural specificity that rings through in every episode. The truth, as told in the story, has resonated with native and non-native audiences alike.

Harjo and the cast know this, and, by the sound of things, none of that will change in the new episodes.

That said, the show isn’t here to explain those nuances to the wider audience.

“Some jokes are meant to be kept as inside jokes,” Jacobs added.

Thankfully, the spirit character, as played by Dallas Goldtooth (who also joins the writing staff in season 2), is there to act as a translator for the general audiences.

“He’s almost the spirit guide, if you will, for the humor of the show,” Harjo continued. “He takes it in for someone who’s not used to our humor and really makes it sort of digestible and familiar.”