DiCaprio gets replaced twice, Netflix hires up for high-profile projects, Bo Burnham goes to Sesame Street, and Scrooged and Black Christmas get remakes.

This Week’s Ketchup brings you another eight headlines from the world of film development news (those stories about what movies Hollywood is working on for you next), covering up-and-coming titles like Tom Clancy’s The Division, and remakes of Black Christmas, Nightmare Alley, and Scrooged. 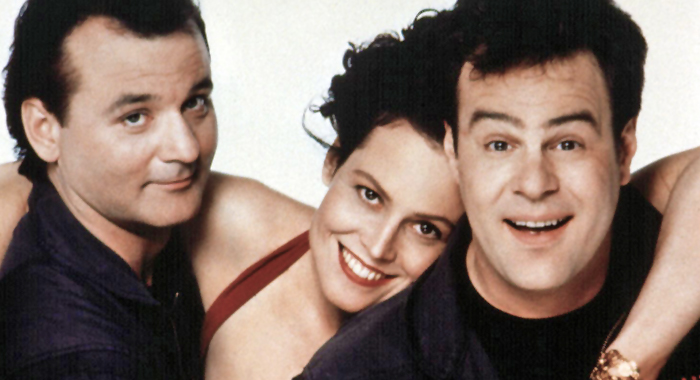 We have no way of knowing if Sony Pictures was hoping to keep certain details about the next Ghostbusters (7/10/2020) secret for now (or if they actually meant for them to be revealed the way they were). If it was the former, however, Sigourney Weaver definitely messed up those plans this week. The original Alien turned 40 last month, so as part of that, Weaver spoke to Parade about it, and also revealed not only that she’s returning as Dana Barrett in the upcoming Ghostbusters movie, but also that “It’s going to be crazy working with the guys again.” Now, we don’t know for sure who “the guys” she’s referring to are, but the way most writers are interpreting it is that she was speaking about the surviving original Ghostbusters. Harold Ramis died in 2014, and Rick Moranis has spoken out repeatedly about why he chose to pass on Ghostbusters. Dan Aykroyd, Ernie Hudson, and Bill Murray, however, already all returned for the 2016 reboot, so they all seem likely to be “the guys” Sigourney Weaver was referencing. Sony Pictures has scheduled Ghostbusters 3 for July 10, 2020, up against The Purge 5. The new Ghostbusters cast members will include Finn Wolfhard, Mckenna Grace, and Carrie Coon.

We see this more with directors, the most successful of whom frequently have more projects than they can actually make, but there are also some major movie stars who are consistently linked to several films at once. Leonardo DiCaprio is absolutely in that field, and this week, we learned of two of DiCaprio’s former projects going to other actors in his stead. Less that two months ago, the news broke that Leonardo DiCaprio was going to team up with Guillermo del Toro on his first film as director since his Best Picture winner, The Shape of Water. Although an exact reason isn’t being given, DiCaprio’s agents failed to reach a deal with Fox Searchlight for that film, a remake of the creepy 1947 carnival drama Nightmare Alley (Fresh at 100%). Instead, it’s now Bradley Cooper who is in talks for the male lead in Nightmare Alley as a carnival “carnie” who teams up with a female psychiatrist to improve his mentalist act and his ability to rip off people.

DiCaprio had also previously been attached to star in Clint Eastwood’s next film as director, Richard Jewell (previously titled The Ballad of Richard Jewell), but his role has now gone to Sam Rockwell instead. The title refers to a security guard who discovered a suspicious backpack bomb at the 1996 Atlanta Summer Olympics. Rockwell will play Jewell’s defense attorney, and the title role is going to Paul Walter Hauser, who was arguably the breakout star of I, Tonya. (At one point, that role would have gone to Jonah Hill, when he was physically much heavier.) The cast for the film expanded even further this week, though, as Kathy Bates will also be co-starring as Jewell’s mother. In related news, Paul Walter Hauser also signed on this week for a lower profile film, Silk Road, which is also based on a true crime story.

There are so many Marvel movies (over 30 if you include the various Sony and Fox movies) that it’s rare to find a big star who hasn’t appeared in at least one of them. Jessica Chastain co-starred as an alien in last week’s Dark Phoenix, and Jake Gyllenhaal will play Mysterio in next month’s Spider-Man: Far from Home, and we now know that they will both headline an upcoming video game movie. Both of them actually joined the movie based on Tom Clancy’s The Division three years ago, but that was so long ago that, until this week, it didn’t seem like a sure thing that either was still attached. The big reveal this week is that Netflix has stepped in to produce and distribute The Division, which will be the next film directed by David Leitch, who’s coming off Certified Fresh action hits in Atomic Blonde (78%) and Deadpool 2 (83%). Tom Clancy’s The Division is an action role-playing game set in New York City following a mass genocide from a viral attack.

4. NETFLIX ENLISTS COCO WRITER FOR THEIR TAKE ON CHRONICLES OF NARNIA

Ostensibly inspired by the box office successes of both the Harry Potter and Lord of the Rings movies, Walden Media started adapting C.S. Lewis’ The Chronicles of Narnia in 2005 with The Lion, The Witch, and the Wardrobe. That first movie was a box office smash ($745 million globally), but the second (The Chronicles of Narnia: Prince Caspian) and third (The Chronicles of Narnia: The Voyage of the Dawn Treader) both dropped by nearly half with $419 million and $415 million, respectively. (The third film also dipped the franchise into Rotten territory.) Disney released the first two films, and Fox the third, but nine years later, Netflix now has the rights. To get things started, Netflix has hired screenwriter Matthew Aldrich (who cowrote Pixar’s Coco, Certified Fresh at 97%) to work on their ambitious adaptations of Lewis’ seven novels into both movies and at least one series.

Like many comic actors, Melissa McCarthy frequently dips her cinematic toes into more dramatic fare (like last year’s Can You Ever Forgive Me?, Certified Fresh at 98%). McCarthy arguably started doing this in 2014 with the “dramedy” St. Vincent (Certified Fresh 77%), co-starring Bill Murray, Naomi Watts, and Chris O’Dowd. St. Vincent was directed by Ted Melfi (Hidden Figures), who had planned to direct a psychiatric dramedy called Fruit Loops (with Woody Harrelson) next, until Disney recently let it go as part of their new Fox plans. Quickly shifting gears, Melfi will instead next direct a tragic comedy called The Starling, with McCarthy and O’Dowd reuniting from St. Vincent as a married couple struggling with grief.

Although January is historically seen as a “dump month,” studios have more recently been enjoying success with the Martin Luther King Jr. Day weekend in mid-January (Glass in 2019, Hidden Figures in 2017, Ride Along 2 in 2016, etc.). Warner Bros. is developing a Sesame Street musical starring Anne Hathaway, and they chose a release date of January 15, 2021 (which would have been MLK’s 92nd birthday) a while back. Filming isn’t expected to start until April of next year, and this week, we found out who will be writing the new Sesame Street songs. That role has gone to comedian-turned-writer-director Bo Burnham, who is coming off a great 2018 after his award-winning feature directorial debut with teen drama Eighth Grade (Certified Fresh at 99%). As pointed out in this piece, Burnham made an early mark on YouTube by performing “raunchy” songs like “My Whole Family Thinks I’m Gay,” but it’s pretty obvious that his Sesame Street songs won’t be like that. Or so we assume.

Possibly more than any other genre, horror movies are particularly ripe for remakes, mostly because they can be made relatively affordably with a high potential box office return. In 2006, one such remake was Black Christmas (Rotten at 15%), based on the influential early 1974 slasher of the same title (Fresh at 71%). Both films featured young actresses as sorority house members who later became more famous: Margot Kidder (Superman) in the original film, and Mary Elizabeth Winstead (10 Cloverfield Lane, TV’s Fargo) in the remake. Blumhouse Productions and Universal Pictures are rushing to remake Black Christmas again, and the lead actress this time around will be Imogen Poots, who co-starred in 2016’s Green Room. We say “rushing” because Universal has scheduled Black Christmas for just six months from now (December 13, 2019), up against the Jumanji sequel. The updated film will be directed by Sophia Takal, who co-wrote the script with April Wolfe, which gives the remake a unique female perspective that might be exactly the jolt it needs.

Bill Murray’s zombie comedy The Dead Don’t Die is in theaters this weekend, and he’s all over The Weekly Ketchup as well. This is the third story with Murray connections, following Ghostbusters 3 and The Starling (which is a reunion project for St. Vincent, in which Bill Murray starred). Although they don’t always “hit” financially, remakes remain popular with Hollywood because many of them can be made relatively affordably (compared to say, superhero movies), but still have name brand familiarity. In 1988, Bill Murray starred in Scrooged (Fresh at 70%), which was itself basically a remake (more specificially a reimagination) of Charles Dickens’ A Christmas Carol. Well, that remake is going to get a remake, because Kevin Hart is producing and is expected to star in a Scrooged remake for Paramount Pictures. The Scrooged remake does not yet have a screenwriter or director, so it’s probably at least a few Christmases away.

Last year marked the 20th anniversary of the 1998 Spice Girls movie, Spice World (Rotten at 35%), which unironically had absolutely nothing to do with Frank Herbert’s Dune (melange jokes for the win). As with all mortals, time marches on even for the Spice Girls, but Paramount Pictures has figured out a way to make another Spice Girls movie: animation. All five original Spice Girls members are signed on to star in the new animated film, which will feature both their hit songs and new songs as well. The Spice Girls movie is part of a new Paramount Animation slate that aims to release two movies a year, starting in 2020 with The SpongeBob Movie: It’s a Wonderful Sponge (5/22/2020) and the comic book adaptation Rumble (7/31/2020). Paramount is also still developing an animated Mighty Mouse movie. This story isn’t the week’s Rotten Idea for those films, however, but because of Spice World‘s Tomatometer score.