Plus, Tom Hanks to host inaugural entertainment with performances by Jennifer Lopez and Lady Gaga, representation on TV takes a hit due to pandemic, The Walking Dead bonus episodes preview, and more TV and streaming news this week.

Comic book TV updates, how to watch the inauguration entertainment, LGBTQ representation on TV is down, a new The Walking Dead season 10 preview, and more of the week’s top TV and streaming news. 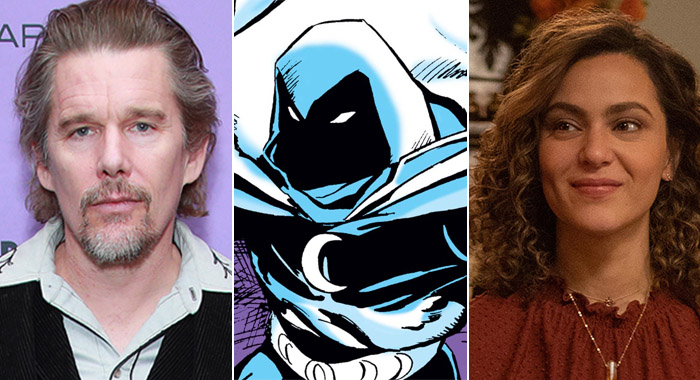 Ethan Hawke will play the villain in Disney+ Marvel series Moon Knight opposite Oscar Isaac, THR reports.  The series’ titular cult character was created in 1975 as an ex-Marine-turned-mercenary.

Plus, May Calamawy, who plays scene-stealing younger sister on the Hulu dramedy Ramy, has been cast in an undisclosed role in Moon Knight. (THR)

Little is known about the storyline or tone of the new series, but it is expected to begin production in March in Budapest.

In other Marvel series news, Deadline reports that Michael Waldron – the head writer and executive producer of Disney+’s Marvel series Loki – will return “in some capacity” for Loki season 2 as part of a new deal with Disney and Lucasfilm … which suggests, of course, that there will be a season 2, which has not been officially confirmed.

Meanwhile, Frank Grillo told Collider he will reprise his role as villainous Crossbones for the upcoming Disney+ animated Marvel series What If …?. 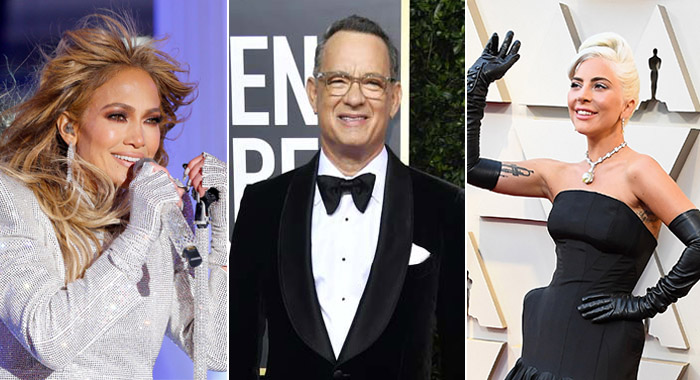 One – one of the very few – things nearly everyone can agree on is that Tom Hanks rules, and that makes him the perfect host of Celebrating America, the January 20 special that will wrap up inauguration day events for President-elect Joe Biden and Vice President-elect Kamala Harris.

The 90-minute show, which will feature appearances by the POTUS and the Veep, will also include Lady Gaga singing the National Anthem, and performances from Jennifer Lopez, Justin Timberlake, Demi Lovato, and Jon Bon Jovi, with more to be named in the coming days. The special, premiering at 8:30 p.m. ET, will air across several networks, including ABC, CBS, NBC, MSNBC, and CNN, as well as streaming on Amazon Prime Video. 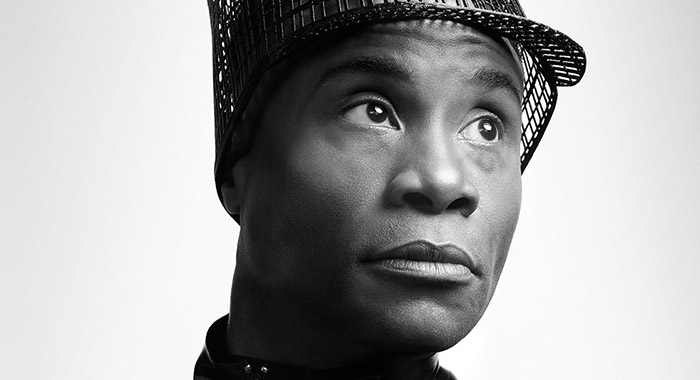 A new study released by GLAAD reveals that delays and work stoppages caused by COVID resulted in a small decrease in LGBTQ and gender inclusiveness on TV this season.

From a high of 10.2 percent representation for characters across streaming TV and network and cable TV last season, this season representation has dropped to 9.1 percent, the first time there has been a decrease at all since GLAAD’s 2013-14 report.

The report, “Where We Are on TV,” revealed that out of 773 series regular characters, 70 were LGBTQ this season on network primetime; last season, 90 out of 879 characters were LGBTQ. The numbers were also down on streaming and cable, largely due to shutdowns on series like The L Word and Killing Eve.

PaleyFest 2021 To Feature a Six Feet Under Reunion 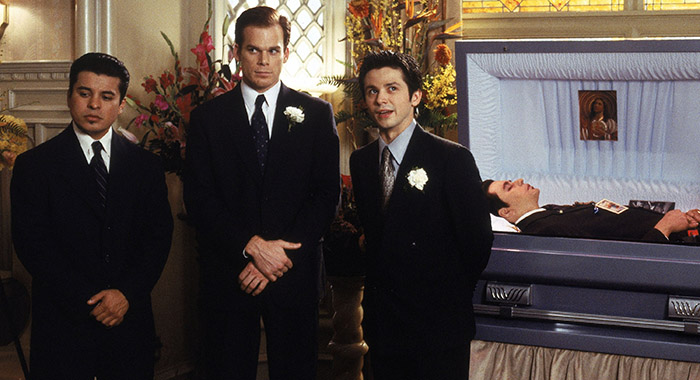 PaleyFest will be a virtual event again this spring, and the first events for the 2021 version include a Six Feet Under reunion with creator Alan Ball and cast and panels on ABC’s new drama Big Sky and CBS’s The Late Late Show With James Corden. Paley Center members will be able to watch all the PaleyFest events beginning March 23, while non-members can watch them beginning March 29, at the Paley Center Yahoo Entertainment channel.

The Walking Dead, Season 10, will continue with six special new episodes that were filmed during COVID and will feature special deep-dive storylines, including the long-awaited Negan backstory that will feature Jeffrey Dean Morgan starring opposite his real-life actress wife Hilarie Burton as Negan’s wife Lucille. Premieres Feb. 28 (AMC)

• Firefly Lane, season 1, is about the decades-long friendship between friends Tully (Katherine Heigl) and Kate (Sarah Chalke). Premieres Feb. 3 (Netflix)
• Flora and Ulysses is a movie adaptation of the book about the friendship between a young girl (Matilda Lawler) and a superpowered, poetry-writing squirrel who helps her understand her parents’ (Alyson Hannigan and Ben Schwartz) divorce.  Also strs Danny Pudi. Premieres Feb. 19 (Disney+)
• To All the Boys: Always and Forever is a teen romcom and the third and final movie in the To All the Boys I’ve Loved Before movie trilogy, starring Lana Condor and Noah Centineo. Premieres Feb. 12 (Netflix)
• Bonding Season 2 finds Tiff and Pete trying to rebound back into the BDSM scene, and a penguin costume is involved. Premieres Jan. 27 (Netflix)
• Snowpiercer season 2 features Game of Thrones’ Sean Bean going full on villain, delightfully so, as train owner Mr. Wilford. Stars Daveed Diggs and Jennifer Connelly, Steven Ogg, and Alison Wright. Premieres Jan. 25 (TNT)
• Clarice is the TV sequel to Silence of the Lambs, with Clarice Starling (Rebecca Breeds) once again called upon to help track dangerous serial killers, no matter how personally painful it is for her. Also stars Michael Cudlitz, Jayne Atkinson, Nick Sandow, and Kal Penn. Premieres Feb. 11 (CBS)
• Losing Alice is a limited series Faustian thriller about a female director who becomes obsessed with a younger screenwriter. Stars Ayelet Zurer. Premieres Jan. 22 (Apple TV)
• Men in Kilts: A Roadtrip with Sam and Graham is a roadtrip series that follows Outlander stars Sam Heughan and Graham McTavish on an amazon trip throughout Scotland. Premieres Feb. 14 (Starz)
• QAnon is a three-part investigative event unfolding all there is to know about the conspiracy group on the heels of the attack of the U.S. Capitol. Premieres Jan. 26 (ViceTV)
• I Care a Lot is a dark comedy thriller about a woman (Rosamund Pike) who becomes very wealthy by scamming elderly people. But then she meets a victim (Dianne Wiest) with ties to a very dangerous gangster. Also stars Peter Dinklage, Chris Messina, Isiah Whitlock Jr., and Alicia Witt. Premieres Feb. 19 (Netflix)

CASTING: The Lincoln Lawyer: Manuel Garcia-Rulfo Will Star in Netflix’s Adaptation of the Legal Drama 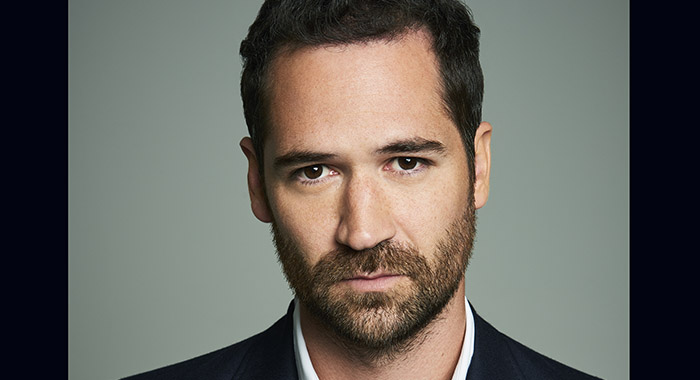 The Magnificent Seven star Manuel Garcia-Rulfo will star in the David E. Kelly produced Netflix series adaptation of The Lincoln Lawyer, which was adapted as a 2011 movie starring Matthew McConaughey, from the 2005 novel of the same name by Michael Connelly. Garcia-Rulfo will play Mickey Haller, a criminal attorney who operates from a Lincoln Town Car.

Keegan-Michael Key will star in and executive produce August Snow, an ABC PI drama based on a series of books by Stephen Mack Jones. Key will play the titular Detroit private eye, a former cop who sued the department in a wrongful dismissal suit and used the payout he got to travel the world. After returning to his beloved city, he spends his cash to try to help his beleaguered city and to hire a band of misfits to help him in his PI business. (Deadline)

Sanaa Lathan, Linda Emond, and Korean singer Jihae will have recurring roles on the upcoming third season of Succession, playing a high-profile lawyer, a White House employee, and a public relations executive, respectively.

Nathan Lane has lined up a pair of new TV roles: he’ll co-star with Martin Short and Steve Martin in the Hulu comedy Only Murders in the Building, playing a resident of said building and the owner of a grocery store chain; and in the upcoming HBO drama The Gilded Age, he’ll play Ward McAllister, a famous historical figure known for deciding which families could be classified as members of New York’s high society. (Deadline)

Daniel Dae Kim and Tony Goldwyn will star in Season 2 of National Geographic’s The Hot Zone: Anthrax, the six-episode story of the 2001 anthrax attacks that caused panic after the 9/11 attacks in the U.S. Kim will play an FBI agent with a microbiology background and Goldwyn will play a microbiologist, with the two initially working together to convince officials of the potential danger the attacks hold and trying to find the person unleashing the anthrax attacks.

After Ken Jennings finishes his stint as Jeopardy! guest host, Katie Couric, Aaron Rodgers, Mayim Bialik, and 60 Minutes correspondent Bill Whitaker will make guest appearances leading the trivia game show, with the show making a donation to the charities of their choice as a thank you.

Insecure Emmy nominee Yvonne Orji has lined up her next project, starring in the Disney+ half-hour comedy First Gen. The series, produced by Oprah Winfrey and British-born Nigerian actor David Oyelowo, is based on Orji’s life as a Nigerian-born, first-generation American who tries to juggle adjusting to life in America while still honoring her parents and their culture.

Tony winner Donna Murphy will play the headmistress of the drama-laden prep school at the center of HBO Max’s Gossip Girl reboot. OK! Magazine also reports the show’s first season will have 12 episodes.

Aziz Ansari will return with a third season of his hit Netflix comedy Master of None, set in London, reports Chortle. BAFTA-winning The End of the F**king World actress Naomi Ackie will play his love interest, and Lena Waithe will return as Denise, one of the best friends of Ansari’s Dev. (Chortle)

Univision will launch PrendeTV, a free, ad-supported streaming service in the U.S. this quarter. The Spanish-language programming will include 10,000 hours of programming across 30 channels.

Black-ish and Grown-ish star Yara Shahidi and her mother are developing Smoakland, a Freeform comedy about Solo, a young woman running a new cannabis company in Oakland. The series is written by The Chi’s Jewel Coronel. (Deadline)

As part of a first-look deal with Hasbro-owned studio Entertainment One, House of Cardscreator Beau Willimon is developing a TV adaptation of the classic board game Risk.

As The Wall Street Journal predicted last week, Roku and Quibi have made a deal for the short-form programming created by the now-defunct streaming service to land at Roku, which paid reportedly less than $100 million for the rights to nearly $2 billion of Quibi shows. 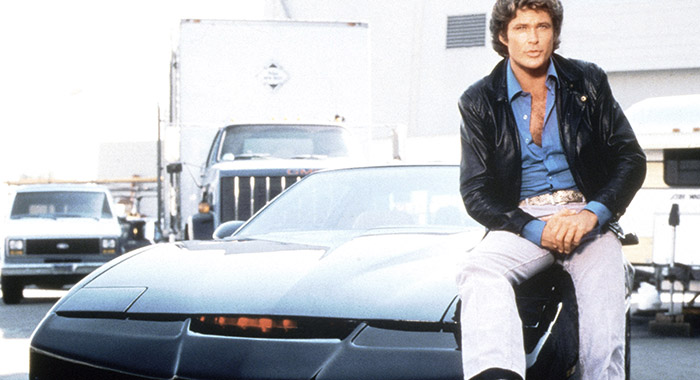 Don’t hassle the Hoff … but, if you are a serious Knight Rider fan with a few hundred thousand extra bucks in your bank account, do bid on his personal (though not verbal) 1982 Pontiac Firebird Trans Am, just like K.I.T.T., which the actor is auctioning.