We chat with the star about his reunion with School of Rock director Richard Linklater, in this week's dark comedy.

Jack Black and Richard Linklater need to do more movies together. The actor and director first collaborated on 2003’s wonderfully pitched crowd pleaser The School of Rock, and their reunion for this week’s dark comedy Bernie has yielded what might be Black’s best performance since that film. In a strange-but-true story set in Carthage, Texas, Black plays soft-spoken Bernie Tiede, the small town’s beloved mortician who befriends its most despised citizen: wealthy, cantankerous old Marjorie (Shirley MacLaine). When Bernie bumps her off, the locals rally around their folk hero, much to the chagrin of prosecutor Matthew McConaughey (working with Linklater for the first time since Dazed and Confused). We caught up with Black recently for a chat about the movie.

It’s great to see you back together with Richard Linklater. How did he pitch this project to you?

Jack Black: Well we were working on School of Rock 2. We were trying to write it, trying to get it. He and [Rock writer] Mike White and me were in a room in Texas trying to figure out what it could be and we couldn’t all get on the same page, so it was kind of dead in the water. We were all just sort of sitting there and Rick said, “I’ve got this other thing that I’ve been working on for a long time — do you wanna do this instead?” So I read it and said, “Yeah, let’s do it.”

Bernie’s an interesting role — quite unlike anything you’ve played before. Did you hang out in funeral parlors to research the character?

[Laughs] I tried to. There are some rules against it. You have to be licensed to be around a corpse in that way. You can’t do that; you can’t watch. It’s hard to get in there. So I talked to one on the phone for a while and got some info that way, and I got a lot of tips and cues from actually meeting Bernie himself.

It was surreal. It was very strange to go to the maximum security prison. It’s a very intimidating place in general; you get a sense of danger in there. You don’t really wanna be there. There are guards all over the place, so you shouldn’t be nervous, but you can’t help it. You look in the eyes of some of the inmates and you go, “Holy sh-t, what am I doing here?”

You weren’t behind the glass screen to do the interview?

Well no, you were also a few feet away from the people. It wasn’t glass. When I got to see Bernie himself, that’s when it really got surreal, because he didn’t fit in there. He’s a very soft and sweet guy; softly spoken and very nice, and we sat in a room with no glass and just talked for 45 minutes.

Did he explain why he killed Marjorie?

I mean, mostly I was there just to listen to his voice and to get behavioral things, but I did ask him questions about why he did it and why he didn’t just leave [her], you know. He said that he just lost it, because of the abuse that he was receiving from her over the years, as her assistant. She had sort of closed the walls to the outside world around them. She was just mean to him, and he lost it. As to why he didn’t just leave her, the money was part of the equation. He had become accustomed… he was seduced by the money and the life that it afforded them, and the way that he could help other people with the money was a big attraction. But also, he couldn’t leave her — it wasn’t in his nature. He was a real pleaser. He was the most popular person in town for a reason. Everybody loved him, because he wanted them to love him. That was really part of who he was. If he ever sensed that you didn’t like him, he would make it his mission to make you like him. That’s the thing that was locked in with Marjorie — she didn’t like him at first, and he slowly got her to like him. And then, you know, if he ever left her she would hate him, and he couldn’t live with that. So he stayed. Until he snapped.

A review in the Hollywood Reporter called your performance “drippingly ripe” and compared you to Alec Guinness in The Ladykillers.

Was the role a challenge, in that you’re playing the comedy on a very restrained level, almost close to drama?

You know, I wasn’t really thinking about the comedy, or the drama of it, I was just sort of playing it the way each scene seemed to call for. I wasn’t thinking about what’s gonna get me the biggest laugh in any situation. Sometimes things felt funny and I would go with that. I guess I just did what felt right.

How much of the role was informed by the outfit? Gary Oldman said something interesting about Tinker, Tailor, Soldier, Spy, that the clothes helped him “put on” the character.

[Laughs] It definitely helps. It definitely informs who you are — you know, the hairdo helped me, and the clothes. It’s funny, when you talk about Gary Oldman — he was wearing some pretty sharp duds, compared to my duds. I felt a little ridiculous. But yeah, it did define me. Made me see it, and step into his shoes — literally.

According to my research this is the first time you’ve worn a mustache exclusively for a role since Nacho Libre.

Is there something in your game plan that every five or six years you decide to pull out the mustache for a role?

[Laughs] No! He had a mustache; I was just trying to be him. It was as simple as that. And actually, his mustache was a little tighter. He had a slightly smaller mustache than what I ended up with, but I was afraid that with my face, the smaller mustache would have started to look like Hitler. And I didn’t wanna do that. [Laughs]

Your Gospel singing in the film is surprisingly angelic. Did you sing in school choir?

I did. I remember singing Vivaldi. [Sings] “Gloria, Gloria! Fa, fa, fa, fa, fa, Gloria!” That’s all I really remember. I know we sang more songs like that in high school, but no gospel — no straight gospel, like this. This was a whole new world opened up to me.

I loved these songs. I loved listening to them and preparing them and singing them. I could’ve done more. I would’ve loved to have done them on Broadway stage. It would have been fun.

You play Francis, who’s an angry online commenter on film blogs. Do you pick up character notes from movie bloggers at junkets like this?

Yes. For the character. [Laughs] I would never be looking up myself [online]. [Pauses] Okay, of course I have.

Charlie Kaufman hasn’t made you go and read reviews of your own movies?

No, I’ve read my reviews, of course. I think anyone who says that they don’t is a liar. We all wanna see what people say about us. [Laughs] To a more specific point, I like to see the ones that are negative.

Exactly. [Laughs] That’s one of the central themes in the movie.

Bernie is in theaters this week. 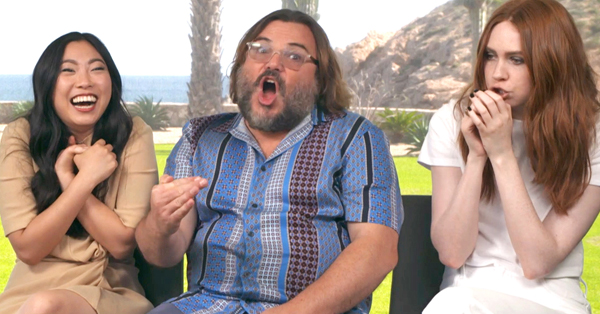