Ridley Scott is planning Gladiator 2, Aquaman and the Lost Kingdom adds new roles, Heathcliff the cat gets a movie, and new projects for J.K. Simmons, Michael B. Jordan, and more.

This week’s Ketchup brings you more headlines from the world of film development news, covering new titles like The Bodyguard, Gladiator 2, and Wonka.

APPLE WINS HEATED AUCTION FOR A CLOONEY AND PITT REUNION 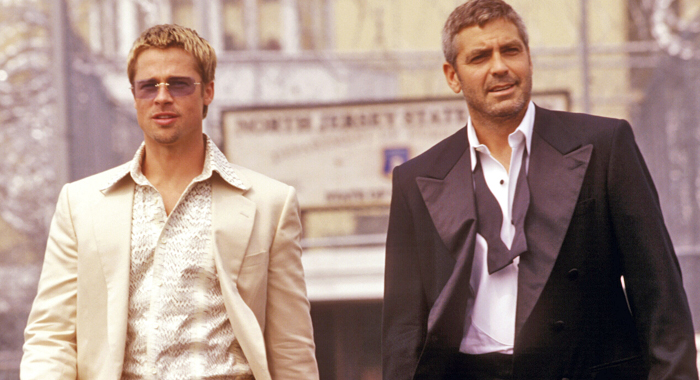 Movie stars fake friendships on movie sets all the time, but one franchise in which the stars seemed to genuinely enjoy working together was Steven Soderbergh’s Ocean’s Eleven (and its sequels), and that included the franchise’s three biggest stars, George Clooney, Brad Pitt, and Matt Damon. Over last weekend, the news broke that George Clooney and Brad Pitt were attached to star in an untitled thriller package that became the subject of a heated bidding war amongst such companies as Amazon, Annapurna, Apple, Lionsgate, MGM, Netflix, Sony, Universal, and Warner Bros. When the dust settled, the project was won by Apple Studios, which will reportedly give the film a “robust theatrical release” in addition to a likely release on Apple TV+ as well. The premise of the thriller is being kept secret, but the director who’s attached is Jon Watts, who is coming off his hot streak as the director of all three Spider-Man movies starring Tom Holland. Critics generally loved both Spider-Man: Homecoming (Certified Fresh at 92%) and Spider-Man: Far from Home (Certified Fresh at 90%), and the third film Spider-Man: No Way Home (12/17/2021) suggests some multiverse-shaking changes for the Marvel Cinematic Universe. When the trailer for the latter dropped, it also broke Avengers: Endgame’s record for most views in 24 hours, which indicates it’ll likely be another hit when it debuts in December.

Playwright Matthew Lopez became the first Latino writer to win the Tony Award for Best Play (for The Inheritance) Sunday night, and that was also an opportunity for reporters to find out more information on the high profile film project Lopez is working on right now. It was just two weeks ago that we learned Lopez was now working on the remake of the Whitney Houston and Kevin Costner 1990s classic The Bodyguard, and we now have a better idea of how Lopez is revisiting the premise. Lopez revealed that the singer in his version will be a “young Latina performer,” rather than the established star that Whitney Houston played in the original. Lopez elaborated, “It’s about how her life has changed because she is an overnight sensation. In the 21st century, that means she’s in immediate need of protection.” It’s not yet known who Warner Bros. might be considering for the role of the singer or the title character.

2. RIDLEY SCOTT PROMISES GLADIATOR 2 WILL BE NEXT AFTER HIS NAPOLEON MOVIE

Prolific director Ridley Scott turns 84 next month, but he shows no sign of slowing down anytime soon, especially considering that he has two films being released in the next two months: The Last Duel (10/15/2021) and House of Gucci (11/24/2021). Scott is currently preparing to direct Joaquin Phoenix as Napoleon Bonaparte in the historical epic Kitbag for Apple Studios, but he’s already making promises about the next film after that. Ridley Scott said this week that “I’m having [the next] Gladiator written now. So when I’ve done Napoleon, Gladiator will be ready to go.” If it’s okay to spoil a movie that came out over two decades ago, several of the characters in Gladiator didn’t survive, so it’s unclear who will be featured in the sequel, since there were plenty of gladiators in ancient Rome to pick from. The Napoleon epic Kitbag is expected to be released in 2023, so we might get Gladiator 2 in 2024 or so.

Timothée Chalamet’s Dune remake is still a few weeks away from release (in the USA anyway), but he is already preparing to work on another ambitious project that revisits a popular character. Chalamet will be the third actor (after Gene Wilder and Johnny Depp) to play the title character in the prequel Wonka, which will be directed by Paul King, director of the Paddington movies, which are both Certified Fresh at 97% and 99%. The Wonka cast has been slowly growing over the past few weeks (including the addition of Jim Carter from Downton Abbey and Keegan-Michael Key), but this week it expanded impressively with the addition of three popular British actors. The new Wonka co-stars are Rowan Atkinson (Mr. Bean), Sally Hawkins (The Shape of Water), and Olivia Colman (The Favourite). Although Wonka has already started production, it sounds like it’s going to need several months of post-production work, because Warner Bros. has scheduled it about 18 months away, on March 17, 2023.

4. MICHAEL B. JORDAN TO PRODUCE ADAPTATION OF AWARD-WINNING BROKEN EARTH

Once they get to a certain level of success, many actors take on the role of producer as well, though not all of them are equally, well, productive. One actor-turned-producer who is keeping quite busy is Black Panther and Creed star Michael B. Jordan, who in just the three years since 2018 already has 12 projects on his IMDb page as producer. The latest one that his production company Outlier Society is taking on is Sony’s adaptation of the three-time Hugo Award-winning sci-fi trilogy The Broken Earth by author N.K. Jemisin. The first book in the trilogy, The Fifth Season, introduces a post-apocalyptic future in which humanity is continually faced with devastating weather events. It’s not yet known if Jordan also plans to appear in the films.

Going into this week, we still didn’t know much about the premise of the superhero sequel Aquaman and the Lost Kingdom (12/16/2022), except that Yahya Abdul-Mateen II’s Black Manta will be one of the villains. But the addition of three new cast members offers a better idea of where the movie is headed. Indya Moore (Queen & Slim) will play Karshon, who in the DC Comics is a Green Lantern villain and a shark endowed with intelligence and telepathic powers. Vincent Regan will play Atlan, an ancient ruler of Atlantis who gave the city its name, and Jani Zhao will play Stingray, who appears to be a new character created just for the film. Put it all together, and it sounds like Aquaman and the Lost Kingdom will feature flashbacks and characters that don’t look entirely human.

They’re still more common on stage than on film, but “jukebox musical” movies are growing in popularity. The subgenre is defined by its use of pop songs rather than original compositions, and very often, those songs are thematically connected, whether by genre or by artist. 2008’s Mamma Mia! (and its sequel), for example, used the songs of the pop group ABBA to tell its story. Now, the songs of the Indigo Girls will be used to similar effect in the LGBTQIA+ summer romance Glitter & Doom, starring Alex Diaz and Alan Cammish as the titular characters. Other supporting characters will include Ming-Na Wen (Agents of S.H.I.E.L.D.), Missi Pyle (Galaxy Quest), and Lea DeLaria (Orange is the New Black), along with cameo appearances by Tig Notaro and the Indigo Girls (Amy Ray and Emily Saliers) themselves.

7. TYLER PERRY AND BLUMHOUSE TEAM UP FOR THE FIRST TIME

On the creative side, people tend to identify films with directors more than producers, but there are indeed some producers who have established strong reputations. Two such examples are Tyler Perry (who’s also a writer, director, and star) and Jason Blum, whose production company Blumhouse is one of today’s most successful specialists in the horror and thriller genres. Perry and Blum are now teaming up for the first time on a thriller called Help, to be written and directed by Alan McElroy, whose credits as a writer include Star Trek: Discovery and The Vampire Diaries on television and the first Wrong Turn movie (but not the sequels). The premise of Help is being kept secret for now, but we do know that it’s already scheduled to start filming in Atlanta in 2022.

8. J.K. SIMMONS TO LURK IN THE WOODS AS EVIL KILLER

Prolific character actor and Academy Award winner J.K. Simmons has played plenty of tough guys in film and TV (including his neo-Nazi character in HBO’s OZ (Fresh at 92%). Simmons said this week that he “didn’t want to play any truly scary bad guys when our kids were young,” but now that his two children are in college, he “has freed himself to unleash his inner villain.” With that in mind, it was announced that Simmons will star as a sociopathic killer in the indie thriller The Woods, to be directed by Michelle Schumacher, who co-starred with Simmons in nine episodes of OZ but also directed him in her feature film directorial debut, 2017’s I’m Not Here (Rotten at 38%). Simmons’ co-stars will include Allen Leech (Downton Abbey), Isabelle May, and Fernanda Urrejola, as he plays an evil killer who stalks “a teenage girl suffering from anxiety due to a tragic event from her past.”

9. MOVE OVER GARFIELD; HEATHCLIFF IS GETTING HIS OWN MOVIE TOO

Pop culture is littered with characters that feel thematically similar. This is far from a new phenomenon, and you don’t need to look any further than the newspaper funny pages to see the evidence. Garfield might be the most famous orange cat in the comic strips, but there was also Heathcliff, who was actually introduced in 1973, three years before Garfield. Legendary Entertainment, the production company behind recent movies like Godzilla vs Kong and the upcoming Dune remake, has acquired the film and TV rights to Heathcliff, which is now written and drawn by the nephew of the Heathcliff creator, Peter Gallagher. Gallagher will also act as producer alongside Steve Waterman, whose credits as producer include Stuart Little (Fresh at 67%) and the various Alvin and the Chipmunks movies.