Ash vs. Evil Dead: 9 Things to Know Midway Through Season 2 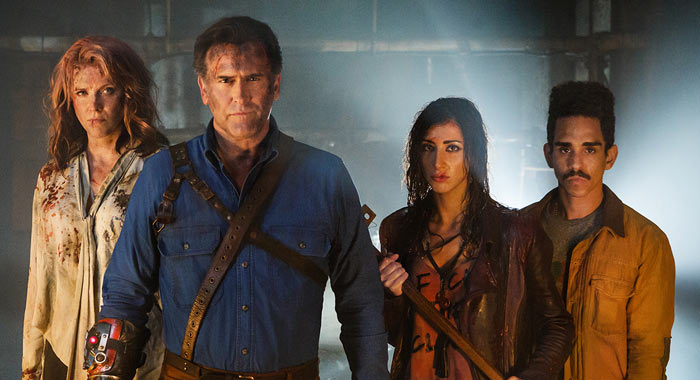 Ash (Bruce Campbell) is partying in Jacksonville with sidekicks Pablo and Kelly (Ray Santiago, Dana DeLorenzo), having shirked Necronomicon duties to the book’s immortal author, Ruby (Lucy Lawless). The Book of the Dead mutates beyond Ruby’s control, thus everyone hoofs it to Ash’s hometown of Elk Grove, Michigan — because where else do you settle apocalyptic matters?

1. THE REAL VILLAIN REVEALED THIS SUNDAY!

Ash and Pablo succeed in exorcising the Oldsmobile Delta 88. Ruby and Kelly hunt demon kids at the crematorium. Sonuga’s character, Lacey, has run off to look for help, while Chet is stumbles through a futile quest to find an open “titty bar.” Where will Sunday’s upcoming episode take us?

“Everyone’s sort of trapped in one place — it’s a whodunnit situation,” Santiago reveals, “Get ready, everybody [starts] turning on each other. And it’s the beginning of another sort of tortuous journey for Pablo.”

“Ruby finally explained to Kelly, and ultimately the audience, why she’s so concerned with Baal,” DeLorenzo speaks of the so-far unseen evil force, “the most dangerous villain in Evil Dead history. He is insidious. He is manipulative. He jumps from person to person and gets inside their minds until they annihilate themselves. Starting Sunday, you will see how this transpires.”

2. ASH NEVER HAD A BACKSTORY — UNTIL HE NEEDED ONE 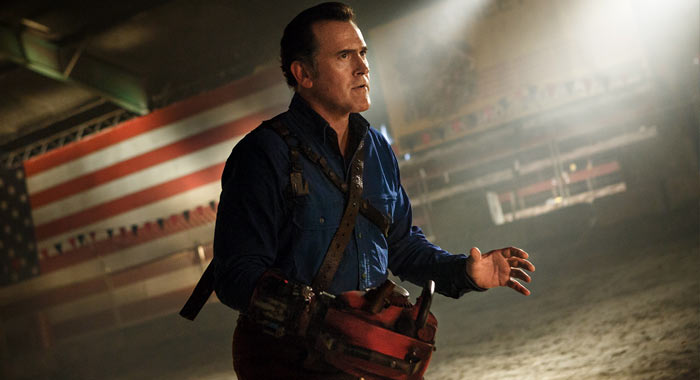 We’re learning a lot about Ashley J. Williams this season, and not just his lust for mother-daughter bed combos. In addition to what’s he been up to the past 25 years (not much), we’re introduced to his family, a ruined young adulthood, and past flames. It’s stark contrast to the original trilogy, where Ash is barely shown interacting with modern society.

“Ash, especially in Evil Dead 2 and Army of Darkness, was [someone from] a Western. It was conceptual,” Raimi explains, “He’s the enigmatic man that comes in and saves the day. His character’s essence was all that mattered. The fact that he was a dope and a loudmouth was enough.

“By necessity, because now we have made almost two five-hour Ash movies [for TV], you have to expand his character. You can’t just watch him crack one-liners for five hours. An audience demands more complexity.”

3. THE PABLO-KELLY ROMANCE SUBPLOT WILL RETURN 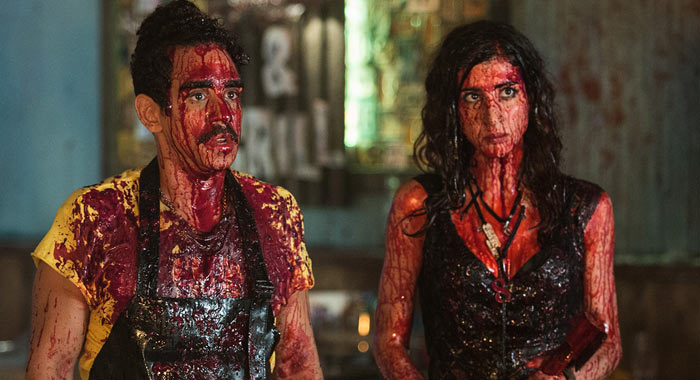 A major thread of the first season was Pablo’s unrequited desire for Kelly, which has been put to the side for this season’s mayhem that frequently separates the stars. Romantic Deadheads, fret not: The subplot isn’t abandoned!

“There has been so much insanity happening, that there’s no time,” DeLorenzo says. “Kelly is also aware the minute her and Pablo get together, one of them’s gonna end up dead.

“But, you’ll have to see. I think there are some moments coming up that you’ll get to see a new level of their relationship in a very emotional and vulnerable way. I’m really looking forward to it,” she said. 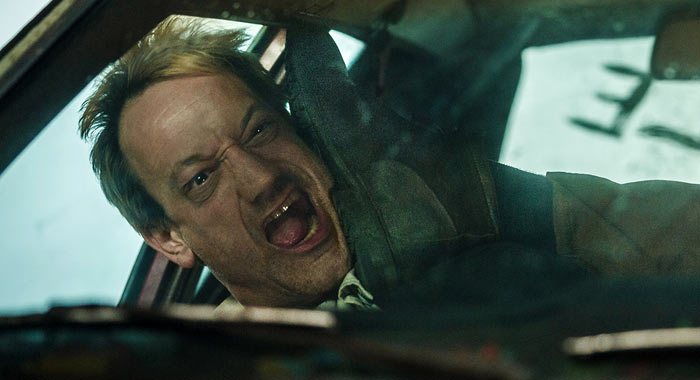 Chet Kaminski is happy to reunite with childhood pal Ash, whereas most barely tolerate the guy or want him dead. The two concoct a silly scheme to lure teen thieves out of hiding with a bar party serving Chet’s signature drink, the ketamine-laced Pink F–k.

“Pink F–k was an actual concoction drunk by some Michigan State students during the 1970s. It really did have ketamine in it,” Raimi explains, “It induces psychedelic and altered states. It was mixed with grape juice and probably Nestle’s Quik and whatever else nasty stuff they could find to make it a little more palatable. [We’ve] reintroduced it in the show, which I think is hilarious. Chet probably never ate ecstasy, but he’s drunk 19 bottles of ketamine. He’s that kind of guy.”

But there is one element of Chet that has evolved with the times (sort of): “Chet has 1993 hair. Frosted tips, like Sugar Ray was back in the day.”

5. YES, SONUGA’S CHARACTER IS STICKING AROUND 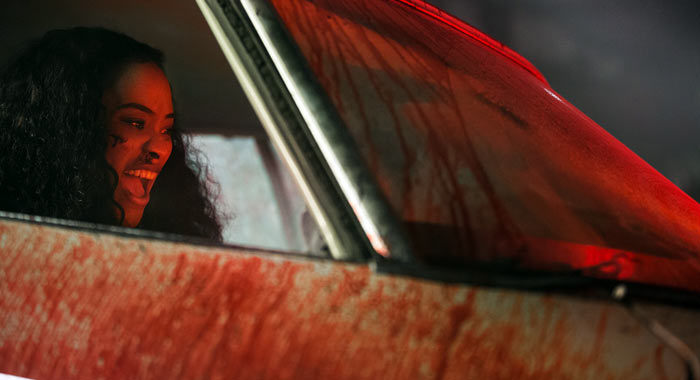 Most TV characters mark their lifespan by the season; actors on Evil Dead have trouble making it past lunch break. Sonuga’s Lacey bucks the trend by surviving two episodes so far (despite stealing Ash’s beloved car), no doubt with assisted plot armor due to Lacey’s father being Elk Grove sheriff, whose wife happens to be Ash’s high school girlfriend. How long can she stay alive?

“Expect to see appearances from little ol’ Lacey,” Sonuga foretells, “In Sunday’s episode, you get to see the family dynamic, and how everyone feels about Ash. Lacey becomes stronger — she has a lot of strength. We saw her go through bad things, and now, I think she has a choice to go either way, either getting really tough or just crumbling mentally. I think we’ll get to see her fight for the things and people she loves.”

6. THERE WERE UNINVITED GUESTS ON SET

Actors and filmmakers frequently tell of ominous, unexplained moments while shooting horror, and Ash vs. Evil Dead is no exception. Maybe having that much corn syrup and red food coloring in one place is just bad mojo?

“Whoever does not believe spirits exist should have been on set, because I think everyone was converted at that point,” Sonuga says of the spectral visitation, “They’re only attracted to you when you’re bringing that energy in. So here we are, coming on set, talking about crazy spirits and this Necronomicon, and crazy stuff starts to happen! ‘We feel the energy because our people are here with us” and then they’re coming out of the woodwork. Crazy!”

7. AT LAST, EVIL DEAD IS HOLDING NOTHING BACK 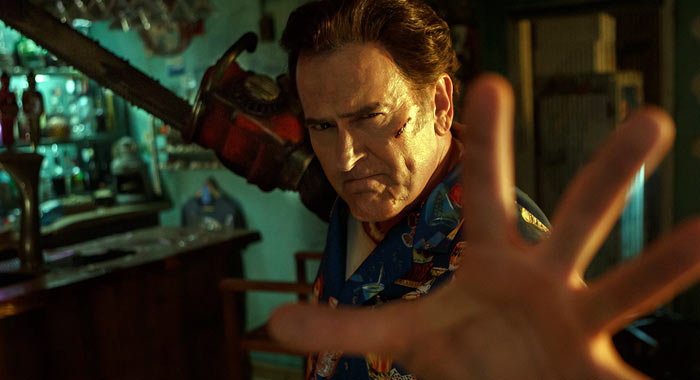 Though Evil Dead is known for outrageous violence, director Sam Raimi and crew always tried playing within the MPAA’s comfort zone for wider release. Not anymore.

“If this were released as a picture, even today, it would be NC-17,” brother Ted boasts, “When we made those first two movies, you’ll notice that the zombies never vomit or expunge red blood. ‘If there’s no real blood, how can they possibly give it anything, at most, but an R rating?’ Starz, thank goodness, is a network that not only allows it, but demands it. [And it’s done with] practical effects on a massive scale.”

8. DEATH DRIVES THE DEAD (MORE THAN YOU THINK) 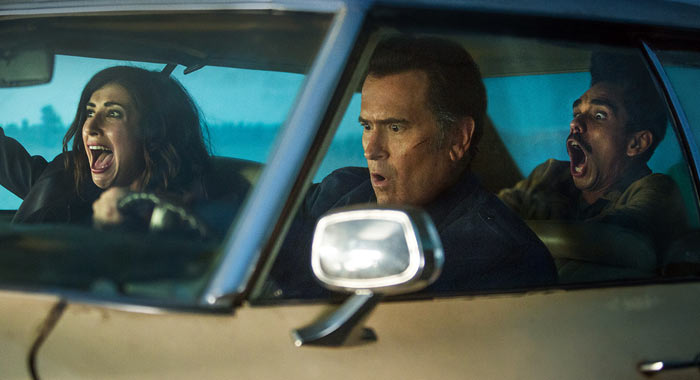 This is a comically bleak show rooted in pestilence, dark rituals, and doom. Does the terror extend into the cast?

“I’m not terrified of how I’m going to die; I just hate that it eventually ends,” Santiago confesses. “Call me narcissistic, but I don’t want the world to go on without me. I want to experience the world forever.

“Ironically, I’m on a show where, for the past couple of weeks, I’m basically dying every episode,” he laughs. “It hasn’t helped.”

Santiago’s railing against the great unknown finds him a brother-in-arms with Raimi.

“I dread sleep,” he says, “though I fear this is nothing more than Death taking out some loan on my life that I already paid for — and it happens every damn night!”

Raimi concludes: “This is why I love horror so much: It’s all just a big rehearsal for the inevitable moment none of us want.”

9. ASH IS BUILDING SUPPORT FOR PRESIDENCY 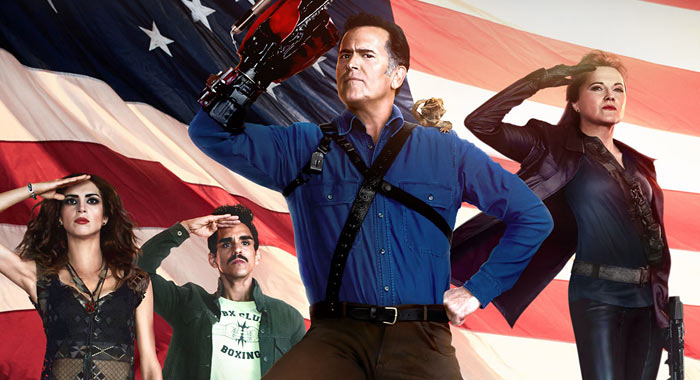 Speaking of unendurable inevitables, this year’s election cycle has exposed everything ugly about national politics. Could a man of the people like Ash running for President inspire the vote? We polled the electorate:

“Hell, yeah!” Sonuga agrees. “We need more Ash in the world, to shake things up with that chainsaw!”

Ash vs. Evil Dead continues airing its second season on Sundays on Starz.