What You Need to Know about DC FanDome

As movie theaters remain closed and studios continue to shuffle their schedules around accordingly, events like San Diego Comic-Con and the Telluride Film Festival have likewise made adjustments to their normal operating protocol to highlight upcoming films and keep fans informed. On August 22, the good folks at Warner Bros. and DC Entertainment will join the fray with a 24-hour streaming event called DC FanDome, hoping to capture the attention stay-at-home audiences with exclusive previews of their upcoming films, TV series, games, and comics.

Like Comic-Con@Home, DC FanDome will be entirely free and online, and it will be broadcast in nine languages, with panels packed with talent, exclusive sneak peeks, exciting announcements, and more, but it’s going to be a little difficult to navigate if you don’t know what you’re looking for. With that in mind, here’s what you’ll need to know before you check out DC FanDome.

8/19 UPDATE: DC Entertainment has just announced that the schedule has changed for DC FanDome, effectively splitting the event across two dates. Now, only the “Hall of Heroes” panels (see below for more info) will be broadcast on Saturday, August 22, and the 8-hour block of programming will repeat two more times over the course of the 24-hour period. After that, the rest of the virtual experience (WatchVerse, InsiderVerse, YouVerse, FunVerse, and KidsVerse) will stream online on Saturday, September 12. During the latter, viewers will also be able to create their own curated schedule (see here). Otherwise, the rest of the info below is still correct.

When does it start, and how can I watch it?

You will be able to stream it live starting at 10am PT on August 22. Most viewers can access it via www.DCFanDome.com, but families with younger viewers can also check out www.DCKidsFanDome.com for more kid-friendly content.

Will it cost me money?

No, DC FanDome is entirely free. However, there will be a shop section where you will be able to browse various products and collectibles for sale.

Who and what will I be able to see?

There will be dozens of panels, covering everything from big tentpole movie releases like Wonder Woman 1984, The Batman, and Black Adam to DC’s high-profile TV series, like The Flash, Legends of Tomorrow, Watchmen, and Doom Patrol, among others. And to help fans get excited, there will be a wealth of massive talent scheduled to make appearances – the full list runs more than 300 names – including Gal Gadot, Margot Robbie, Dwayne Johnson, Andy Muschietti, and Robert Pattinson – just to name a very few of the hundreds of cast and crew scheduled to show up. You can check the full calendar of events and panels HERE and start building your own schedule so you don’t miss anything you want to see. 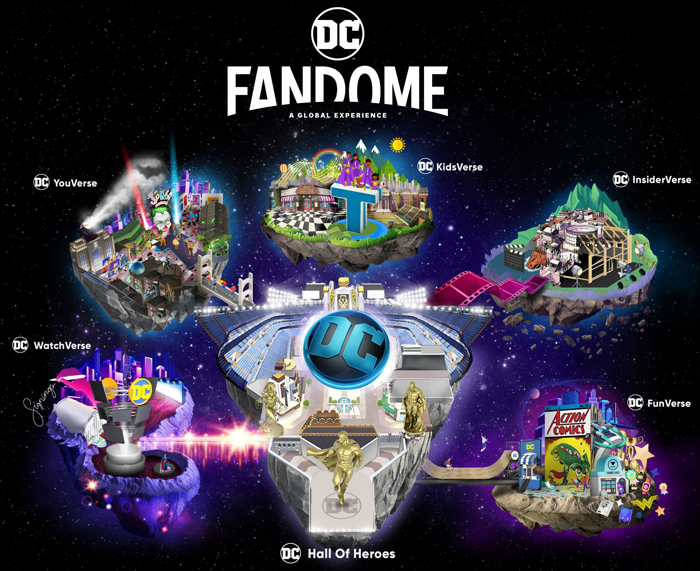 Will there be anything besides just TV and Movies?

The event will be broadcast via a central “Hall of Heroes” on the DC FanDome site, which will be aligned with five “islands” covering different types of content. Most of the focus is going to be on the Hall of Heroes, where DC’s tentpole films will hold their star-studded panels and big reveals. That broadcast will begin at 10am PT on Saturday, August 22, running several panels in succession until 6pm, at which time the entire schedule will repeat itself (and then again at 2am). The “WatchVerse” island offers an immersive virtual theater district that you can explore, where smaller panels and behind-the-scenes looks at DC’s TV properties will be viewable. Unlike the Hall of Heroes, WatchVerse will include new panels for the entire 24-hour period, although most of the high-profile ones will happen on Saturday and be presented in encore presentations as it draws later into the night. But if you want more than just TV and movies, FanDome has you covered.

The “InsiderVerse” island will take you onto the Warner Bros. studio lot to see how all the movies, games, comics, and more are actually crafted, and its presentations will run similarly to WatchVerse. “YouVerse” will focus on user-generated content, like cosplay and fan art, and its 10 broadcast presentations will all run continuously for the entire 24-hour period, so you can pop in and out whenever you want.  “FunVerse” is another immersive space where fans can access digital comics, shop for products, take a selfie, and participate in other interactive experiences; as such, these 11 activities will be accessible at any time during the event. And lastly, for the younger fans, there’s “KidsVerse,” which will focus on the more family-oriented animated properties and offer activities for children to engage with, and that will also be accessible at any time. 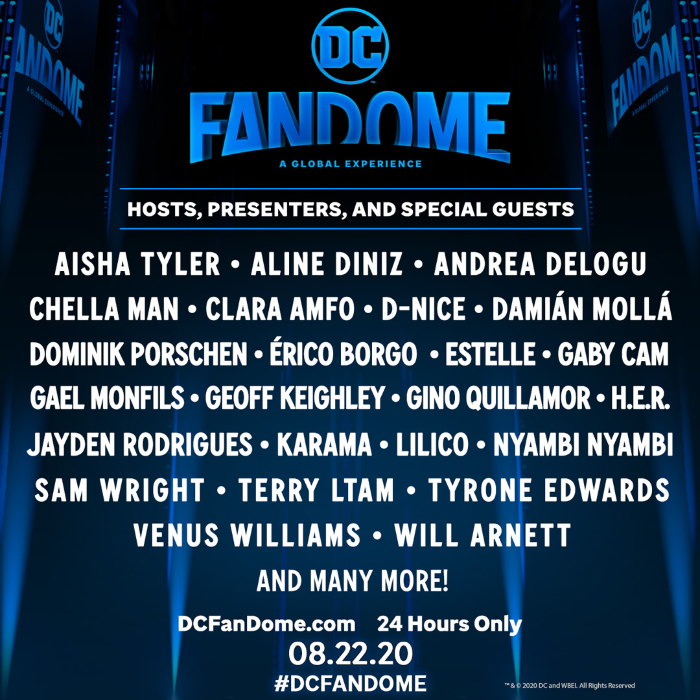 Check out DC FanDome August 22 at 10am PT: www.DCFanDome.com or www.DCKidsFanDome.com.