"The First Day of the Rest of Your Life" already has fans dreading the wait for season 8. 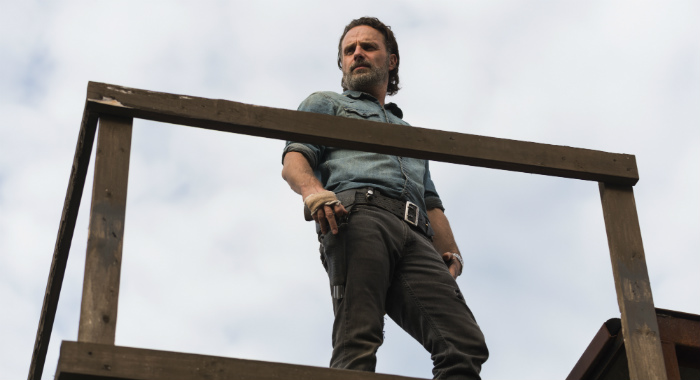 Is it October yet?! Sunday night’s season 7 finale of The Walking Dead left us with our hearts beating, catching our breaths, and dying for more as Rick (Andrew Lincoln) and his band of warriors finally rose up against Negan (Jeffrey Dean Morgan) and the Saviors. The episode, titled “The First Day of the Rest of Your Life,” was fraught tension — and we had to say goodbye to one of our favorite characters.

SPOILERS AHEAD: STOP HERE IF YOU HAVEN’T SEEN SEASON 7, EPISODE 16 OF THE WALKING DEAD 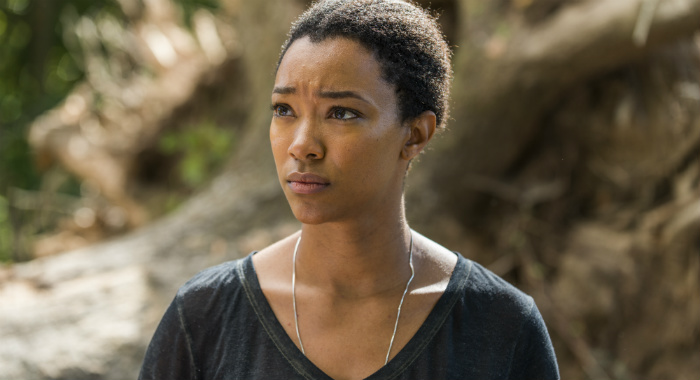 The episode began with a close-up of Sasha (Sonequa Martin-Green) in what looked like a confined space, listening to music from an old iPod. We later discovered Negan was taking her to Alexandria to help facilitate the quelling of the uprising by transporting her in a coffin. She seemed okay with it, but while in there, she was struggling. Then she started to remember one of her final moments with Abraham (Michael Cudlitz) while they were still in Alexandria. Fans loved seeing them together again.

The scenes with Abraham and Sasha would be more awesome, if Glenn showed up delivering a pizza. #TheWalkingDead #TWD

One tweeter even gave a small shout-out to Sasha’s former boyfriend, Bob. Remember him?

Bob when he see Sasha and Abraham in heaven #TheWalkingDead pic.twitter.com/iTkHXKiI52

SHOULD WE TRUST DWIGHT?

Back in Alexandria, Dwight (Austin Amelio) was still trying to win the group’s trust, saying he wanted Negan dead just as much as they did. Daryl and Tara (Alanna Masterson) were not having it. In fact, Daryl (Norman Reedus) almost killed him — Tara really wanted Daryl to slit his throat — but he stopped himself. Viewers were wondering what Dwight’s real motives were.

But what was the gameplan Dwight came up with? You know it wasn't just cutting down some trees. #TheWalkingDead @WalkingDead_AMC pic.twitter.com/USVH2YEdSq

If we can trust medicine with all of the bad side affects they can cause we can trust Dwight just a wee but. @WalkingDead_AMC #TWDFinale

@WalkingDead_AMC NOOO! He's different in the comics. I don't trust tv-show-Dwight at all!

YOU CAN’T DO IT ALONE 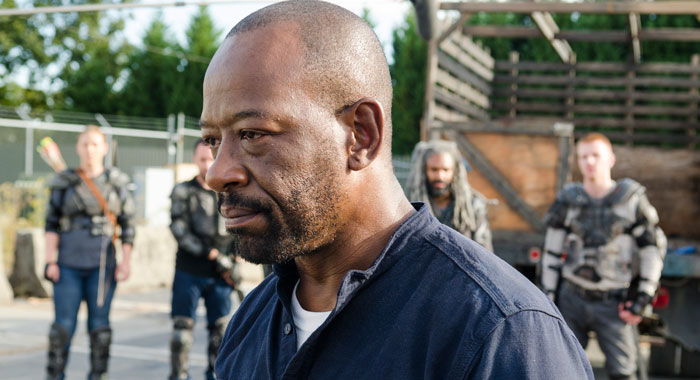 Meanwhile, The Kingdom warriors, with Carol (Melissa McBride), Ezekiel (Khary Payton), and his tiger in the lead, headed to Alexandria when they came across Morgan (Lennie James). Ezekiel finally knocked some sense into Morgan, who wanted to go it alone. We’re glad he did — Morgan can be so annoying.

Morgan shit or get off the pot already. What is he running for elected office? #TWDFinale #TheWalkingDead #TWD pic.twitter.com/O63BhLv7fX

I'm not even sure what that conversation with Morgan was about #TheWalkingDead pic.twitter.com/Wvg8Q7aep2

SCAVENGER JADIS WANTS TO HAVE SEX WITH RICK 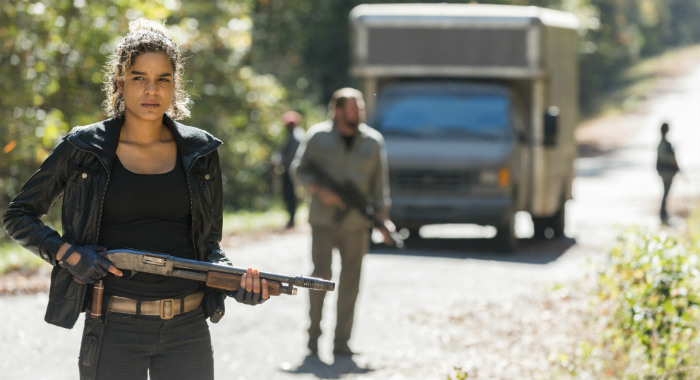 The Scavengers arrived to help with the fight, as per the deal. Jadis (Pollyanna McIntosh) even told Rick she’d sleep with him after it was over, asking Michonne (Danai Gurira) if she cared. That got some great reactions, both from Rick and Michonne and the viewers.

Michonne when Jadis said to let her sleep with Rick after the fight. #TheWalkingDead #TWDFinale https://t.co/YWCkCD7MQP

NOTHING GOES TO PLAN 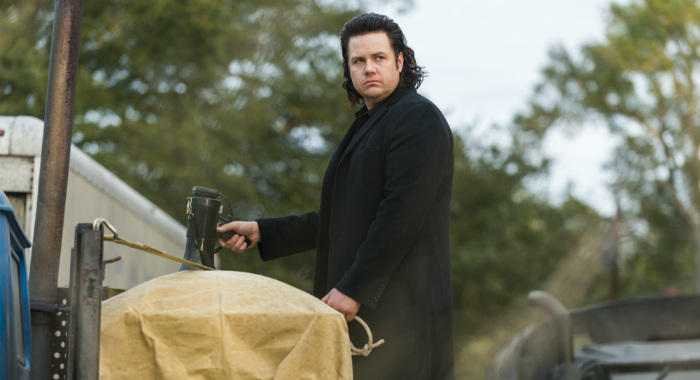 The Saviors drove up to the Alexandrian gates, with turncoat Eugene (Josh McDermitt) acting as the Saviors’ spokesperson and telling the group to surrender. Fat chance.

Rick when Eugene pulled up with the Saviors #TheWalkingDead @WalkingDead_AMC pic.twitter.com/FWDplV6FmN

@JoshMcDermitt @CataclysmGames @WalkingDead_AMC I hope Eugene's mullet gets caught on a barbed wire fence next season, karma for teaching the saviors how to stick walkers to it

Before Rick could respond, Negan stepped from the truck, along with double-crossing Dwight, as the Scavengers suddenly turned their guns on the Alexandrians. It seemed Negan offered Jadis and her crew a better deal. Jadis even shot Rick in the side so he’d be hobbled. It didn’t go over well with fans.

Immediately where my mind goes when I see Jadis and the trash people on The Walking Dead #TheWalkingDead #twd #fragglerock pic.twitter.com/XhSXGSkEsv

Negan once again chastised Rick for his insolence and stated Rick would have to sacrifice a person to Lucille the bat, or he would kill Sasha, whom he brought in said coffin. Except Sasha had a different plan in mind. See, she took that poison pill Eugene gave her – and when Negan opened the coffin, out popped zombie Sasha. She almost bit Negan, too. It was awesome, and while fans were sad to see Sasha go, they appreciated how she went out.

RIP sasha, you went out like a freakin champ, fighting and biting your way to the end @UndeadWalkingFS @WalkingDeadArmy @WalkingDead_AMC pic.twitter.com/8XonGykEtv

Sasha Walker is the one and only zombie hero in the entire series. #TheWalkingDead #WAlkingDead #TalkingDead #TWDFinale @AmcTalkingdead

The Sasha thing provided a distraction for the Alexandrians to start shooting, but they still couldn’t overpower the Saviors and the Scavengers. Just as it looked like Negan was going to win again — and bash in Carl’s (Chandler Riggs) skull — in came Carol, Morgan, and The Kingdom, along with Maggie (Lauren Cohan) and the Hilltoppers, to save the day. Watching Ezekiel’s tiger maul a couple of Saviors was worth its weight in gold.

#TheWalkingDead the fighter of this episode goes too pic.twitter.com/106vsNICrU

THE BATTLE IS OVER, BUT THE WAR HAS JUST BEGUN 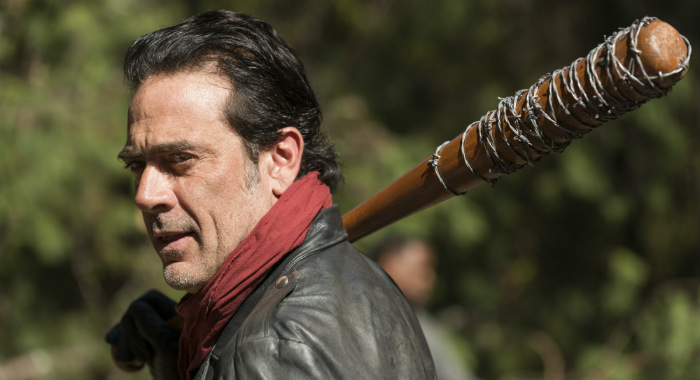 Jadis and Negan both escaped, but will certainly be amassing a bigger army. But at least Rick, Michonne, Carl, and the rest survived to fight again. As they were all processing what just happened, the three leaders — Rick, Ezekiel, and Maggie — stood valiantly in front of their warriors, as Maggie’s voiceover gave a touching tribute to Glenn. It might’ve caused some ugly crying, but it also warmed our hearts.

"Glenn made the decision. I was just following his lead." What a perfect tribute to a beloved character. #thewalkingdead @AMCTalkingDead

IM SO SAD RIGHT NOW. THAT WAS SO GOOD BUT OH MY GOD IM SHOOK #TheWalkingDead

Now we have to wait what seems like forever for The Walking Dead to return in October.