8 Best Moments of the Game of Thrones Season 8 Premiere

A dragonrider is born, the queen of the castle and the would-be queen of the Seven Kingdoms get sassy, Bran faces an old threat, and more highlights from the premiere. 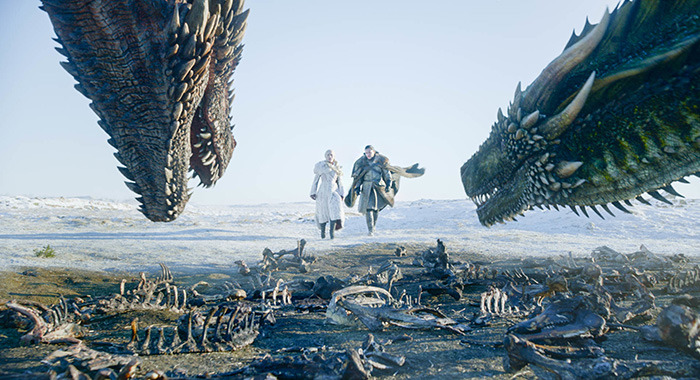 The title of Game of Thrones’ season 8 Episode 1: "Winterfell" 92% was kept secret right up to the premiere on Sunday night. It’s not like that title is a spoiler — we knew from the season 7 finale and from the first trailers that this ride was “Next stop: Winterfell. ” Did anyone really think we were going to sail to White Harbor with the characters and brunch with House Manderly?

In any case, the television event hit like a freight train, with each major character’s name trending on Twitter in the U.S. at once. 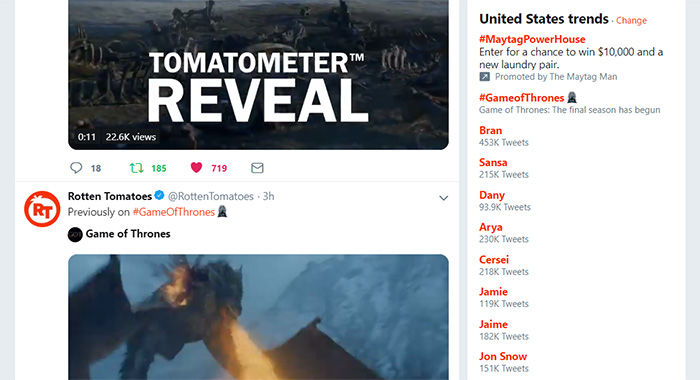 “He’s never been a bastard. He’s the heir to the Iron Throne. He needs to know. We need to tell him.” So said Bran Stark (Isaac Hempstead Wright) of his cousin Jon Snow (Kit Harington) at the end of season 7, and we were here for it.

But those weren’t the final words of season 7. The final words were: “Run! Run!” Thank  Tormund Giantsbane (Kristofer Hivju) for that keen observation.

Rewatching the final scene of the final episode of the season, I looked in the distance of the scene for the Umber family home in a morbid car-wreck-waiting-to-happen sort of way, and thought that after the dead decimate Last Hearth, they will run into the Last River. Since they can’t swim, they’ll need to go around it, if the geography of the North in the series stays true to books here.

The season 8 premiere settled some of those concerns with the new opening credits showing Last River and including a visit to Last Hearth to bear witness to the carnage.  That moment and more were among the highlights of the episode.

Take our poll below to tell us what your favorite moment was. Don’t agree with our eight? Tell us in the comments.

Were you paying attention or were you making a cocktail in the kitchen and singing along with the theme song when the opening credits played? They took us inside Winterfell and the Red Keep to their depths. The credits have always been a foreshadowing to one degree or another. The season 8 credits first show the Wall destroyed, then a rolling motion to Last Hearth, a pause in that motion at the river between. The perspective then flows down to Winterfell, a journey down into the depths of the crypt, then an image of the astrolabe with a lion with a fish in its mouth (remembering that Lannisters are the lions, Tullys are the fish, and the only Tully left is Edmure, so what could that mean – Cersei will control Riverrun?), a hung hound (THE Hound?) — or wolf — riddled with arrows, and what looks like the Night King with a wolf’s head and a dagger in his hand (if that’s a metaphor for Arya, I’m out, but maybe it’s literally a wolf, as both Nymeria and Ghost are still somewhere about).

Next, to King’s Landing. The Red Keep rises, as we descend into its basements, where Balerion the Black Dread’s huge skull faces down the ballista (or “scorpion”) that Cersei shot at it. Up to the throne room, where a lion rises above the Iron Throne, then back to the astrolabe where a four dragons and a shooting star (with what appears to be a dragon’s head) fly over uncertain geography (or are those skinny horses?).

The main title is still surrounded by dragon, a lion, a wolf and a stag (with only one antler – Gendry?). The credits then reveal that the episode was written by Dave Hill and directed by David Nutter.

2. Battle of the Sass: Sansa vs. Mother of Dragons 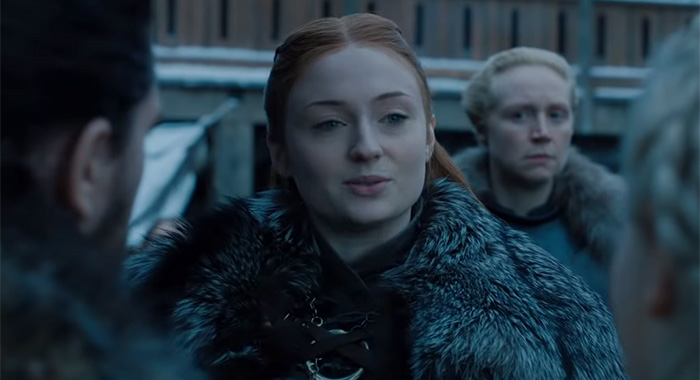 A collection of moments, really. Whenever Sansa Stark (Sophie Turner) was near Daenerys Targaryen (Emilia Clarke), they each let the sass fly.

Upon first introduction, Daenerys tries flattery on Sansa, who is not having it: “The North is as beautiful as your brother claimed – as are you.”

Sansa (eyeballs Daenerys with a tight grin): “Winterfell is yours, Your Grace.” 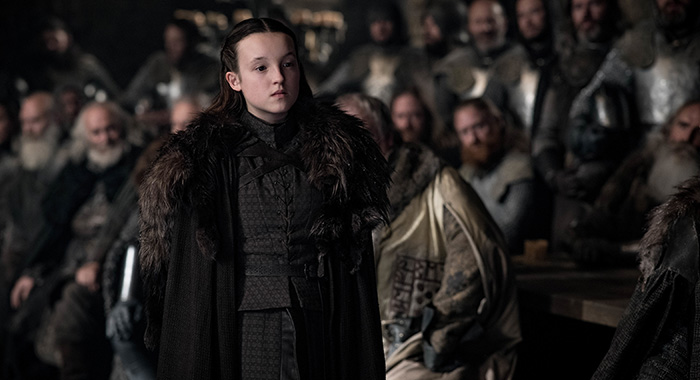 Then, the major characters convene with the North’s bannermen. Tyrion Lannister (Peter Dinklage) attempts to soothe the concerns of Lyanna Mormont (Bella Ramsey) and smooth over tensions in the room, but makes matters worse mentioning how many men and beasts came with Jon and Daenerys.

Sansa: “May I ask, how are we meant to feed ‘the greatest army the world has ever seen’? While I assured our stores would last through winter, I did not account for Dothraki, Unsullied, and two full-grown dragons. What do dragons eat, anyway?” she asks the air.

Daenerys, staring out into the same air: “Whatever they want.”

Jon stares forward as the two women exchange a glance across him. 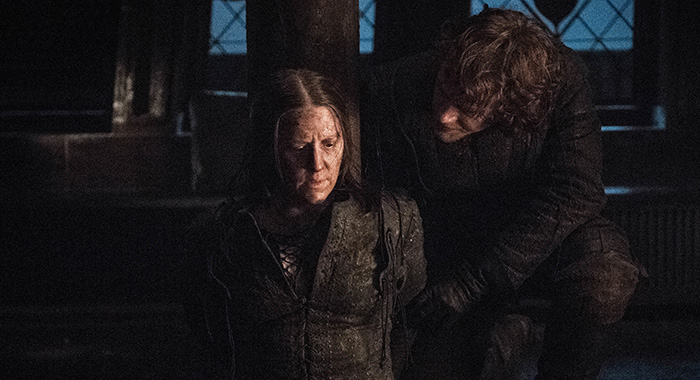 Just that. Wasn’t a particularly flashy rescue, but that he was there and killed people to get to her – it means something between siblings. She gives him an affectionate headbutt in thanks. Sometimes just showing up is all that matters. 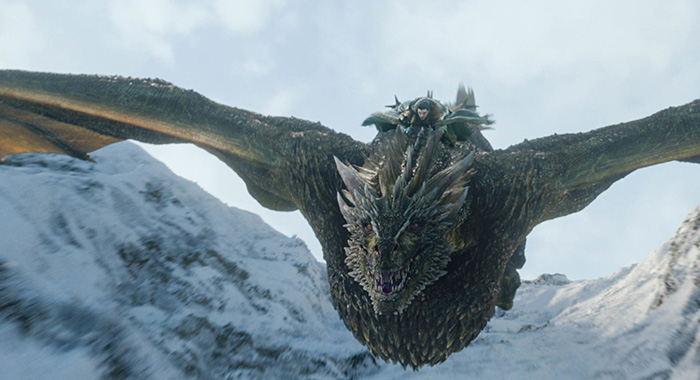 Jon accompanies Daenerys (after she notes that his sister doesn’t like her), ostensibly to see what’s wrong with Drogon and Rhaegal, who aren’t eating as much as they should. She climbs up on Drogon and prompts Jon, “Go on,” after Rhaegal noses at him. “I don’t know how to ride a dragon,” he warns. She replies, “Nobody does – until they ride a dragon.” He: “What if he doesn’t want me to?” She: “Then I’ve enjoyed your company, Jon Snow.” He successfully mounts the dragon: “What do I hold onto?” Daenerys: “Whatever you can.” Varys, Tyrion, and Davos’s mouths drop to the ground when they see Jon do a flyby of Winterfell on Rhaegal, who does not make it easy on his rider.

We’d celebrate the birth of a dragonrider, but remember season 7, episode 6 “Beyond the Wall”? The Hound, Berric Dondarrion, Jorah Mormont, and even a wight all rode a dragon before Jon, so there’s that. 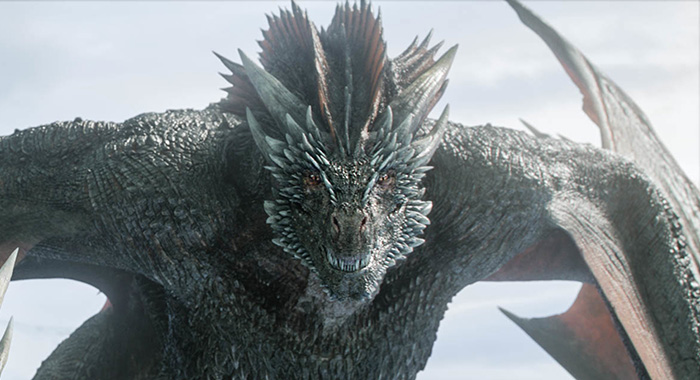 When they land, Jon tells Daenerys, “You’ve completely ruined horses for me.” Drogon growls at Jon when he kisses Daenerys. Despite her encouragement to have no fear, Jon opens an eye to see Drogon staring laser beams at him. We love this relationship already.

5. Daenerys Sort of, Kind of Admits to Sam That She Killed His Father and Brother 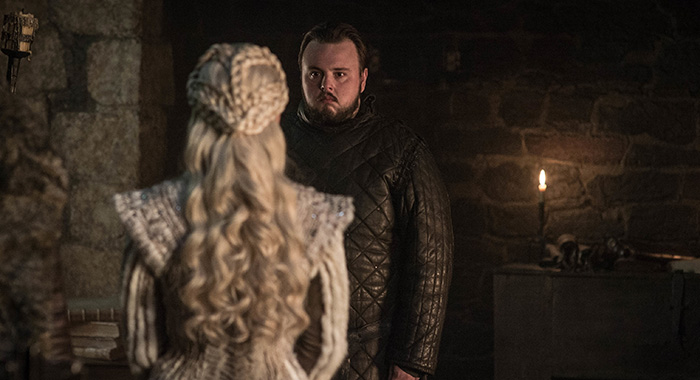 Daenerys ventures into the Winterfell library escorted by Ser Jorah to thank Sam for saving her advisor. When he gets to the part where he mentions he’s a Tarly, Daenerys does the right thing and begins telling him that his father wouldn’t bend the knee. Before she can fully confess, Sam guesses the rest, but then stumbles again when she notes that his brother stood with his father.

Viewers had to be grateful that Sam is a smart guy and guessed what happened before Daenerys had to get into specifics. It was awkward and really uncomfortable, but a highlight because it had to be done, and she accepted her role and began to confess it as soon as she made the connection.

6. Sam, Bran, and Jon in the Winterfell Crypts: “Now’s the Time” 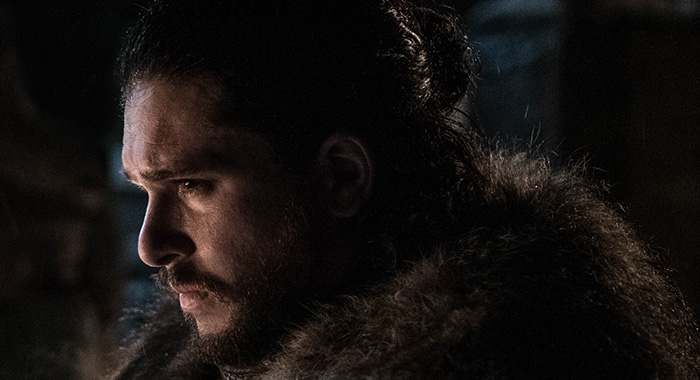 Coming away from a tragic meeting with Daenerys, Sam runs into Bran sitting in his chair near the Winterfell crypts. Sam’s bummed about his father and brother and doesn’t want to have to tell Jon about his birth parents and that he’s heir to the Iron Throne. “He trusts you more than anyone,” Bran says. “Now’s the time.”

Down in the crypts, Sam and Jon have a warm reunion. Sam informs Jon that his new girlfriend executed his father and brother. Then he gets to the real reason we’re gathered here today: “Your mother was Lyanna Stark. And your father – your real father – was Rhaegar Targaryen. You’ve never been a bastard. You’re Aegon Targaryen, true heir to the Iron Throne.” Wow. Let’s take a minute to let that settle in. “You’re the true king: Aegon Targaryen, Sixth of His Name, Protector of the Realm. All of it.”

Excellent. But what’s he going to do with that information?

7. The Fate of the Umbers 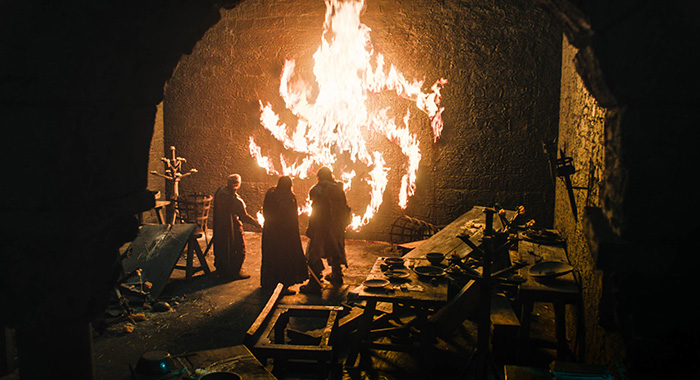 A group of men march toward a snowy building. It’s Last Hearth, the Umbers’ castle. We see Tormund, Berric, and a small group of what must be Night’s Watch survivors from Eastwatch-by-the-Sea. It’s a slaughter in the central hall. They meet up with Edd Tollett and more Night’s Watch men. They go to a hall where the Night King has mounted young Lord Umber on the wall in the center of a swirl of human limbs. Stay classy, Night King!

“It’s a message from the Night King,” Berric says. They propose heading down to Winterfell by doubling up on horses, which sounds like a terrible idea from the horses’ perspective. Just then, the Umber boy wights alive, screaming, and Berric sets him on fire with his flaming sword–torch combo. If someone in the scene has alcohol, now’s the time to pass it around. 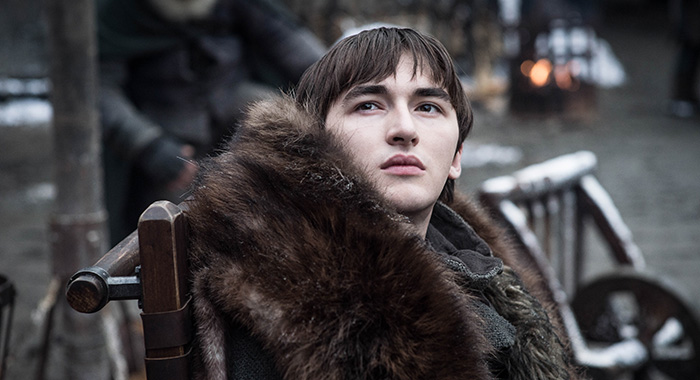 That look. Jaime looked like he’d never faced a more fearsome foe. The reason it was so meaningful had more to do with what it promised for episode 2, than just the weight it carried as the attempted murderer faced his would-be victim. 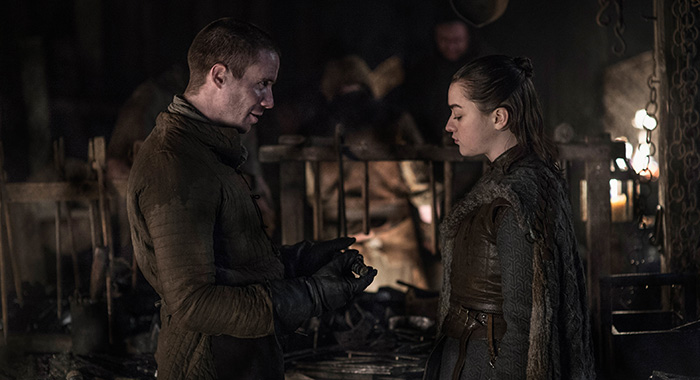 Some other stand-out moments: Tyrion’s reunion with Sansa, who promptly questions his smarts; Qyburn approaches Bronn to kill Jaime and Tyrion; Cersei awards Euron his prize, and he offers to put a prince in her belly; Arya’s exchanges with Jon and The Hound; and Arya flirting — flirting — with Gendry.

Jon and Arya’s reunion is everything I needed to see today! #GameofThrones pic.twitter.com/cMlGfTOMeO

Game of Thrones airs Sundays at 9 p.m. on HBO