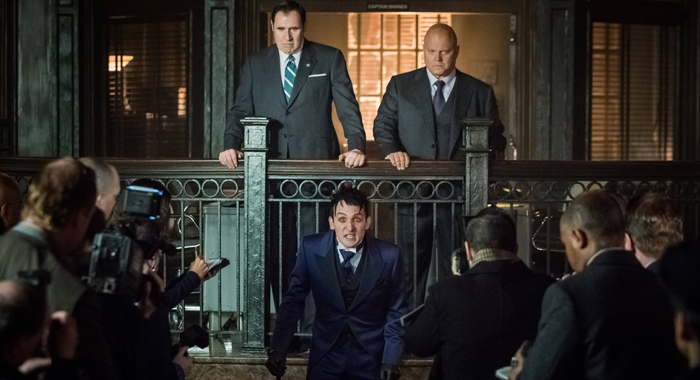 Fox’s Gotham, now in its third season, provides a window into the little-explored period of Bruce Wayne’s life between his parents’ murder and when he dealt with that tragedy by becoming Batman. And while the show takes a lot of liberties with his established backstory — in the comics, for instance, Wayne and Harvey Dent are around the same age, while 21 years separate actors David Mazouz and Nicholas D’Agosto — it also brings to light what officer James Gordon was doing before the Caped Crusader showed up.

Though comic books haven’t covered Bruce’s younger days extensively, a few have portrayed his early days in the suit, and others have explored the lives of Gotham characters like Catwoman, the once-and-future Commissioner Gordon, and the city itself.

Here are five comic books and series that Gotham fans should definitely check out.

Written By: Greg Rucka, Ed Brubaker
What Is It? A police procedural in the vein of Law & Order, this series explored what it’s like to be a cop in Gotham City with the specter of Batman constantly hanging over your head — which, no surprise, is not as easy on the ego as you might think.
Why Gotham Fans Should Read It: Besides being a grittier version of the show in comic book form, especially the first season, this comic book series also features many of the same characters, including Detectives Renee Montoya and Crispus Allen.
Available: DC Comics, Comixology

Written By: Frank Miller
What Is It? While Miller is best known for reinventing Batman with his iconic comic The Dark Knight Returns, his most Gotham-like work came a year later with this gritty graphic novel. In it, Batman is learning the ropes, while the GCPD is learning to deal with the idea that some dude in a bat costume is beating up criminals.
Why Gotham Fans Should Read It: Think of this comic as the sequel to Gotham, as it shows what Bruce Wayne will be doing when he’s old enough to leave the house without telling Alfred what time he’ll be home (not that young Bruce has been good about that in the show).
Available: DC Comics, Comixology

Written By: Ed Brubaker, Darwyn Cooke
What Is It? In this series, Selena Kyle has hung up her cat burglary hat (mostly) and is more like a community activist trying to save her corner of Gotham City from gangs. Which does sometimes mean she has to resort to her old skill set, though usually with the reluctant approval of a certain Dark Knight.
Why Gotham Fans Should Read It: While we enjoy the way Camren Bicondova portrays this feline-loving felon on TV, these books give big hints as to where this conflicted character’s life might be headed if Gotham lasts as long as The Simpsons.
Available: DC Comics, Comixology

Written By: Scott Snyder
What Is It? Bruce Wayne has hung up his cape and cowl, and Batman is believed to be dead by those who don’t know his alter ego. But Gotham City still needs a Caped Crusader to keep the pickpockets and purse snatchers from running amok. Enter our old Gotham pal Jim Gordon, who not only becomes the new Dark Knight, but does so with a spiffy mechanical suit that would make Iron Man jealous.
Why Gotham Fans Should Read It: Though Gordon does a good job fighting crime on Gotham, imagine how much better he would be if he had a mechanical suit of armor that was more tricked out than an iPhone 7?
Available: DC Comics, Comixology