See the Beastie Boys Flick on the (Very) Big Screen!

THINKFilm and National CineMedia today announced an exclusive one-night only Big Screen Concerts presentation – An Awesome Night with Beastie Boys – on Thursday, March 23rd featuring the Beastie Boys’ musical extravaganza “AWESOME; I … SHOT THAT!” and the world premiere of “A Day in the Life of Nathanial Hörnblowér,” a 30-minute short created specifically for this one-time event, which will be digitally shown on nearly 200 screens at 8:00pm local time at movie theaters across the country.

For a list of theaters, please go to www.awesomeishotthat.com/march23/. Tickets are currently on sale at participating Regal, United Artists, Edwards, Cinemark and AMC movie theatre box offices and online at www.BigScreenConcerts.com. ”AWESOME; … I SHOT THAT!” begins its ongoing commercial engagements in select cities on March 31st.

Enhancing this special event screening of “AWESOME…” is the world premiere of “A Day in the Life of Nathanial Hörnblowér,” a 30-minute short starring comedian David Cross as the mysterious director of “AWESOME…” The Suisse Cinéaste Bi-Annual described the mini-movie as “a docu-drama that gives viewers a glimpse into the dark, strange world of one of the most elusive and controversial filmmakers working today.” (As band aficionados know, Hörnblowér is a pseudonym for Beastie Boy Adam Yauch, who directed “AWESOME…” as well as “A Day in the Life…”)

THINKFilm Head of Theatrical, Mark Urman, says, “Nothing about the way ‘AWESOME…’ was made was conventional, so we are trying to be as imaginative in our release strategy as Adam was in making the film, and as the band has always been. Fans have been waiting for this film since it popped at Sundance and now, they can be the ‘first kids on the block’ to see it everywhere before it starts key city engagements on March 31st. As for the Hörnblowér mini-movie, it will self-destruct right after it is presented on March 23rd, never to be seen again.”

To create additional frenzy, THINKFilm is continuing its partnership with MySpace.com, the leading lifestyle portal for online networking, with a special promotion tied to the March 23rd event. In celebration of the newly launched MySpace Film application, MySpace will give its more than 60 million members the opportunity to win free tickets to attend the one-night only screening of the film in select cities. To visit the film’s official MySpace page, please go to: www.myspace.com/awesomeishotthat.

AWESOME; I… SHOT THAT is a formally innovative feature film experience starring director Nathaniel Hörnblowér/Adam Yauch and fellow Beastie Boys Mike D and Adrock, along with Mix Master Mike and other special guest appearances. The documentary began at one of their concerts at New York’s famed Madison Square Garden in October 2004, as Beastie Boys handed out 50 cameras to audience members at their sold-out performance. These 50 different passionate perspectives shot from the point-of-view of the audience take the viewer deep inside the world of a live Beastie Boys show, prismatically and kinetically capturing the experience of a live musical performance like no film has ever done. 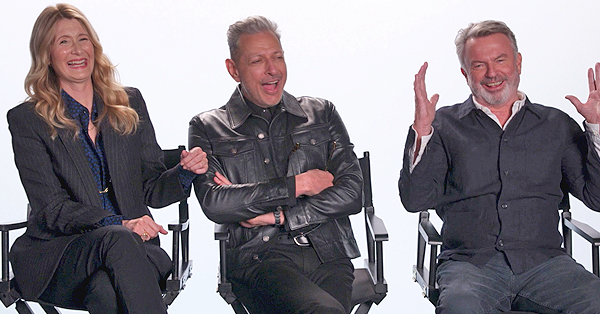 An Oral History of Jurassic Park