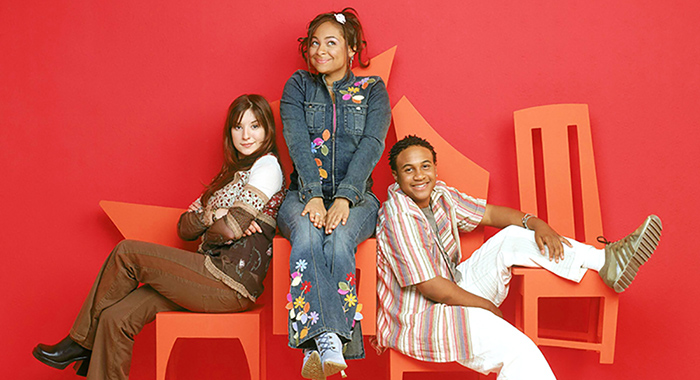 After Star Wars was released in 1977, everyone wanted to be Han Solo, including black children. Because before Lando Calrissian arrived in The Empire Strikes Back (1980), young black film fans were forced to search for the heroes in themselves in the white characters available to them.

As Black History Month draws to a close, we have a look back at some of the groundbreaking TV series that helped change that.

Before the 1970s, black characters on television most often appeared in the token roles of gangster, hardened cop, or caregiver. Then shows like The Jeffersons, Fat Albert and the Cosby Kids, and Good Times began to fill the void in black representation, and in the ’80s, Diff’rent Strokes, A Different World, and 227 widened the conversation surrounding black archetypes, higher education, and navigating the politics of black and white America.

And while early children’s programs like Sesame Street and Mister Rogers’ Neighborhood promoted important messages of community and tolerance, they would often feature black children in stories that would subtly incorporate the otherness of black children in order to be palatable to white audiences and avoid controversy. In reality, it’s that perceived otherness that makes life difficult for black families.

Though pioneers for children’s show representation, ’80s cartoons like Captain Planet, Defenders of the Earth, and Jem and the Holograms did little to elevate the minority characters above colorful casting.

But in the ’90s, the landscape changed, and black kids were finally able to recognize themselves in the characters they were seeing on TV. The impact was immediate and the feeling was unique and powerful.

The birth of Nickelodeon, Cartoon Network, and a 24-hour Disney Channel finally made it possible for creators to put a sharp focus on the black experience in children’s entertainment. Suddenly, black children were the stars of television shows — shows that understood the challenges they would face in life.

The important lessons the following ’90s series taught were frequently difficult and wouldn’t have been possible without the onscreen representation these shows provided. Their legacy is a TV universe that today includes series like grown-ish, Cousins for Life, Craig of the Creek, Doc McStuffins, and K.C. Undercover.

Have a look at some of those lessons of these series and specific episodes that made such a difference in empowering young black viewers.

Young sketch comedy gods Kenan Thompson and Kel Mitchell followed up their All That success with their own eponymous show. The series, set in Chicago, featured a theme song by Coolio and centered on two kids trying to get through high school, work regular jobs, and date. They served up epic laughs for four seasons that eventually led to a feature movie.

The Episode: “I.Q. Can Do Better”
Kel’s parents are a brain surgeon and a rocket scientist, but his genius isn’t as readily apparent. So, when the boys take an IQ test and his score comes back as certified brilliant — and Kenan’s score is a three — Kenan suspects something is wrong with the test. At the end of the episode, it turns out both boys are geniuses.

The Lesson:
Kenan and Kel perfected slapstick to a professional grade early in their careers; in fact, the actors were almost too good at the exaggerated style of physical comedy — to the point that viewers might mistake their characters’ bumbling, scheming, practical jokes, and mistakes as signs of ignorance. The episode revealed, however, that their ingenuity and intellectual curiosity were actually the building blocks of genius. 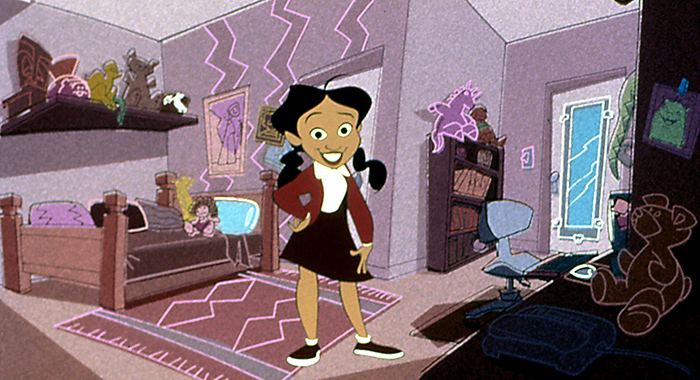 Each week Penny Proud, eldest child of the Proud family, navigated the terrifying world of middle school, hormones, and the many dynamic personalities of her big family (with a theme song by Solange Knowles, backed by Destiny’s Child). Voiced by Kyla Pratt, Penny was a good girl with bad girl attitude. She was ready to fight for her friends, but hated to disappoint her parents. The show mostly focused on the problems all adolescents face, but occasionally an episode specific to black childhood would explore a previously hidden truth.

The Episode: “I Had a Dream”
Penny’s history teacher, tired of reading the same old reports during Black History Month, assigns the class projects focusing on lesser-known black American contributions to history. Penny gets figuratively and literally swept up in the assignment, traveling to 1955 dressed as 1960s activist Angela Davis. Enraged at the limitations the era enforces on her, Penny gives a modern-day speech about the accomplishments of black Americans. Later, her love for her white friend, Zoey, inspires a protest that eventually integrates their school. Parents protest the change, but Penny retorts by reciting portions of Dr. Martin Luther King’s “I Have a Dream” speech.

The Lesson:
This episode serves an intense reality check for children who believe the past doesn’t affect their current existence. In her dream, Penny’s history teacher works as a disregarded janitor, and her friends are second-class citizens; Penny Proud can’t swallow that level of indignity. She learns that the civil rights movement was built on a foundation of hard work, and that all black children owe a debt to those who paved the way — lest history repeat itself. 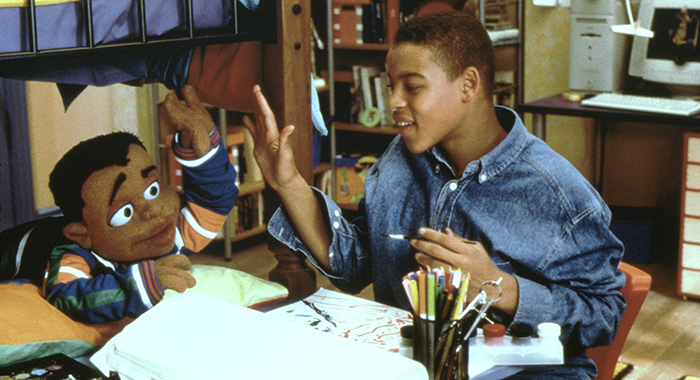 Nickelodeon’s sitcom was about a suburban black family that takes in their cousin Skeeter, a puppet in the human world who uses his adorable nature to create mischief. The story is a bit like an updated Leave it to Beaver. Skeeter, his cousin Bobby, and Bobby’s lifelong friend and eternal crush Nina encounter classic sitcom tropes like navigating April Fool’s jokes, sneaking out of the house, and trading lives with a wealthy lookalike.

The Episode: “The Bicycle Thief”
Skeeter sees the perfect opportunity for Bobby to prove his love for Nina when Nina’s bike is stolen. Together the crew plays detective to figure out who took the bike. Clumsy Skeeter sets up a sting operation using Bobby’s bike as bait for the thief, and it works! Unfortunately, the thief is craftier than expected and gets away. The friends try to get the police involved, but a lack of evidence gets them turned away. Eventually, they track their bikes down and discover that the shop worker who’s been helping them enhance their bikes set them up.

The Lesson:
Interactions between police officers and black children are often portrayed as terrifying and life-threatening, but in reality, interactions with the police exist on a spectrum.When the officers arrive on the scene, they uncover a stash of spicy candy. But when the trio warn an officer, he brushes them off and even mocks them lightly. The kids just shrug and let the officer eat the candy, showing that sometimes police officers’ microaggressions will shame black youth. The lesson is imperative to their survival in a world that isn’t always kind (but also doesn’t have to be deadly).

KND was a super-secret global spy ring made entirely of adolescents determined to end parental crimes of forced veggies, bedtimes, and the regulation of Halloween candy. Numbuh Five, voiced by Cree Summers, was an early childhood icon for many black girls. Summer’s gravely voice, Five’s sporty design, and the effortless cool of the character can be compared to Pam Grier’s Coffy or a modern-day Idris Elba. When the show focused on Five, it often forced the fearless anchor of the team to confront her inner demons.

The Episode: “Operation M.A.U.R.I.C.E.”
One of the main goals of the KND was to allow kids to be kids for as long as possible. Age and time changed Five’s sister, Cree, from Five’s best friend to her sworn enemy. Afraid her friend Maurice will suffer the same fate when he turns 13, Five and the team agree to watch Maurice 24/7 to make sure he doesn’t become part of the teen’s team. Though he’s growing up, Maurice will get to be a kid forever.

The Lesson:
Some people get to remain kids. Growing up doesn’t mean a person is expected to be jaded. Maurice, though 13, still wants to protect his friends. He’s growing and maturing, but his roots remain intact. This sets expectations for Five that help relieve a lot of the pressure she feels as she approaches the same age; she doesn’t have to become her sister. In a world where black children are expected to grow up faster than their peers, learning that remaining young at heart is a choice is an important one.

Raven (Raven-Symoné) is a normal high-schooler, except for one thing: She can see into the future. Raven, who has aspirations to be a designer, tries to survive high school and interpret her visions with her friends Eddie (Orlando Brown) and Chelsea (Annelise van der Pol) by her side.

The Episode: “True Colors”
Chelsea and Raven apply for a job at Sassy’s. Raven passes every test with flying colors, but in a vision, Raven hears the boss say she doesn’t hire black people. Hearing these words shocks Raven to her core. For the first time she is consciously aware of racism. “I always heard about racism,” Raven tells her friends, “but I didn’t know how much it could hurt.” Raven’s parents convince her to fight back. Eventually, they catch the boss on camera being overtly racist, and she is fired.

The Lesson:
Fighting for one’s rights can be incredibly daunting, and having to explain to young children why one’s skin color shouldn’t exclude them from work, can be demeaning and embarrassing. Even Chelsea, who loves Raven endlessly, has a hard time identifying her new boss as racist. “She just discriminates against bald people,” Chelsea explains at one point, showing that even the most well-intentioned friend may still have difficulty understanding these situations. Raven was ready to give up, but with her support system behind her, she was able to get justice, which is an enormously valuable lesson for any child to learn.