It’s time for our weekly countdown of the Winter TV premieres! Here are the best new shows for the week of Friday, March 18. See how this week’s shows, Crowded, The Americans, Criminal Minds: Beyond Borders, and Marvel’s Daredevil stack up against each other on the Tomatometer!

This week at the movies, we’ve got teenage rebels (The Divergent Series: Allegiant, starring Shailene Woodley and Miles Teller) and a heartsick mother (Miracles from Heaven, starring Jennifer Garner and Martin Henderson). What do the critics have to say? 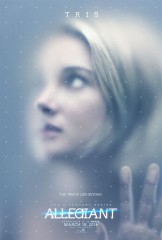 The critical knock on the Divergent franchise has tended to be that it’s little more than a second rate Hunger Games, and while that assessment might seem reductive to its legion of teenage fans, it essentially holds true for the latest chapter. Critics say Allegiant — in which a band of teenage revolutionaries, led by Tris Prior (Shailene Woodley), escapes post-apocalyptic Chicago, only to discover a eugenics proponent leading a community on the outskirts  — is top-heavy with exposition and special effects, stranding its talented cast in a place-holding installment that’s unlikely to lure any newbies to the series. 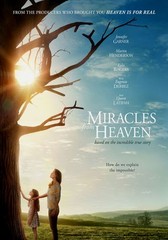 Even though it’s based on a true story, Miracles from Heaven is the kind of thing you’ve seen before; it’s the story of a mother who refuses to give up hope, even after her daughter has been diagnosed with a rare, untreatable disease. What elevates this faith-based drama, critics say, is the committed, commanding performance of Jennifer Garner, who lends urgency to a film that could have otherwise been merely a collection of melodramatic clichés.

With its fourth season, The Americans continues to deliver top-tier spy drama while sending its characters in directions that threaten to destroy their freedoms – and their lives.

Bolstered by some impressive action, Daredevil keeps its footing in Season two, even if the additions of Punisher and Elektra can’t quite fill the void left by Wilson Fisk.

A talented cast is left with no room to flourish in Crowded, a misfire whose dated feel is compounded by a pronounced lack of laughs. 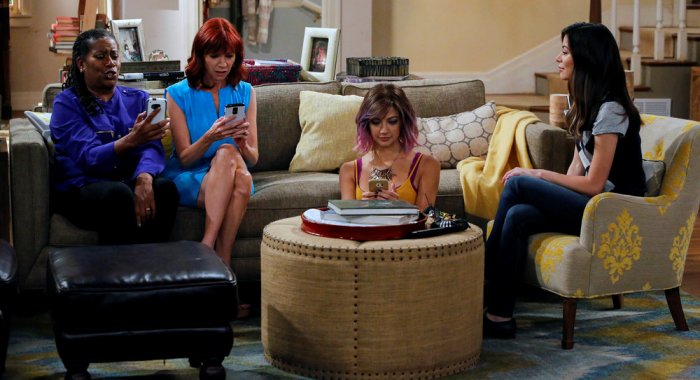 Crowded has a dream cast: Carrie Preston (The Good Wife, True Blood), Patrick Warburton (Rules of Engagement, The Tick), Stacy Keach (The New Mike Hammer, Fat City) Carlease Burke (Switched at Birth), and onscreen sister duo Mia Serafino (The Butterfly Effect 3: Revelations) and Miranda Cosgrove (Despicable Me). The show is a multi-cam live-audience sitcom about a couple of parents who must adapt their empty nest to accommodate their grown daughters moving back in. To add to the mayhem, Dad’s parents opt to stay rather than retire in Florida. The show previews tomorrow night and has its official premiere on Sunday.

We went to the set to check in on production and ask the cast about the experience while we got to hang out in the bar (those cocktails ain’t real, dern it!). The actors were all smiles and warmth, clearly delighted to be a part of the show. Here’s what we learned: 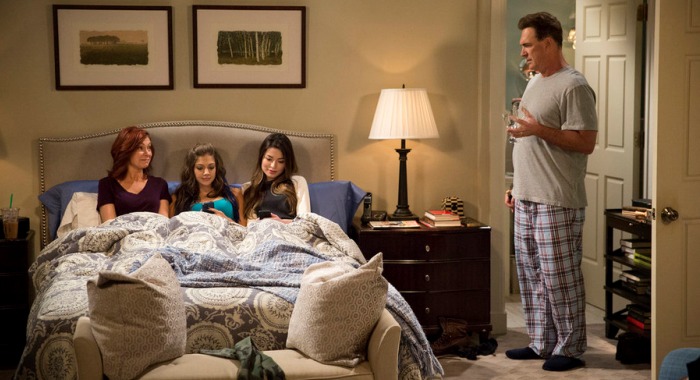 Is the live sitcom making a comeback? “NBC is definitely behind trying to make a multi-cam stick and we’re hoping this is going to be the one,” said Carrie Preston of the format. They can be exciting for the cast and the audience, but that doesn’t mean it’s not nerve-wracking, too. Patrick Warburton told us, “I was nervous at first. Going into another multi camera show wasn’t something that I intended to do — but they seemed to have something special here.”

Preston wasn’t nervous, though. As a “theater baby,” her first love is working in front of an audience. “This is like a wonderful hybrid between film and theater,” she said. “It’s thrilling. It’s like game night. We rehearse during the week, but then it’s really exciting when [the audiences] finally come and we get to fly.” Veteran actor Stacy Keach feels the sitcom is the “best gig in the world for an actor.” He said, “You get a chance to have a life — you don’t have to work on the weekends, except to memorize lines. And I think there’s nothing more purgative than laughter.”

When writers think jokes don’t land, or dialogue sounds wonky, or even if they just want to hear something different, they give rewrites to the cast which must be instantly incorporated into the next take. “[It’s] a little bit like being shot out of a cannon,” Preston explained. “You see the script supervisor coming over and she’s got the script, and you’re like, ‘Oh God, is it me?’” 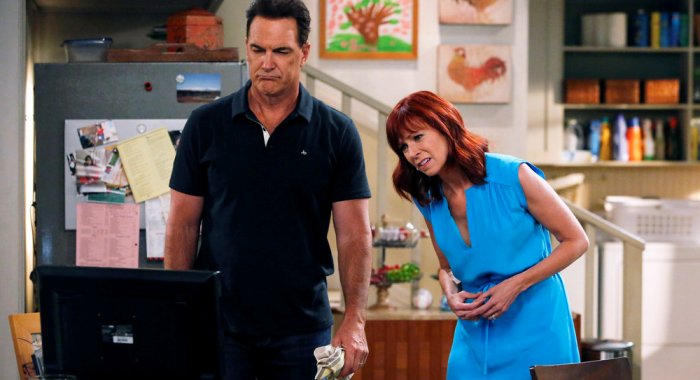 Those of us above a “certain age” recall the magical moments when the actors in The Carol Burnett Show would break character in front of a live audience (the cast used to make bets offstage as to how soon into a sketch Harvey Korman would break and start laughing). Anytime there is a live audience, actors are in jeopardy of this. “[Thos moments] work in a sketch show like Carol Burnett,” said Preston, “not so good when [it’s] a multi-cam.” But she shared a story of a funny exchange between Mia Serafino and herself that grew so out of control with laughter, that they had to re-stage the scene so Serafino would look down — avoiding eye contact with Preston — because they kept making each other laugh.

Serafino then recounted a time when she couldn’t stop laughing during a sequence with onscreen sister Cosgrove. “I kept laughing,” she said, “and [Miranda’s] face is like twitching and [director] Jimmy Burrows, like, yelled at me. And I felt bad I threw [Miranda] under the bus — I [said] ‘It was Miranda!’ And [Burrows] was like a parent scolding us. He was like, ‘Miranda, you are not to look at her until she is done with the line!’” Serafino felt bad about it, hoping at least one take was usable.  Cosgrove, though, responded, “I didn’t do anything, I was stone-faced!”

BEING IN AN ONSCREEN ROMANTIC COUPLE REQUIRES CHEMISTRY, BUT IT CAN BE BAD NEWS WHEN THOSE LINES GET BLURRED 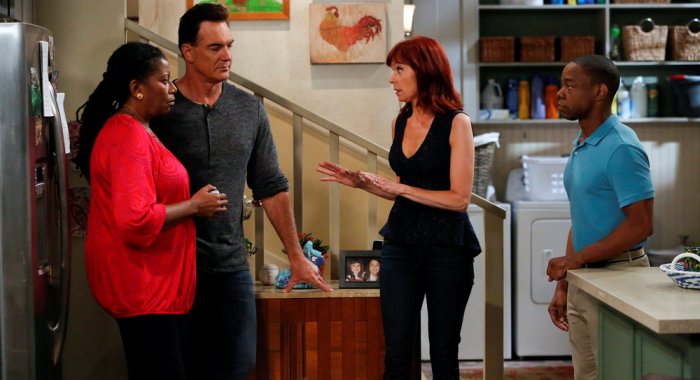 According to Carlease Burke, who plays Keach’s wife in the show, actors who play loving couples on screen simply must have a chemistry together. “Even Stacy mentions in his book,” she said, “just by pretending to be in a relationship can create intimacy between people.” She clarified that, of course, nothing romantic needed to happen, but that there is a certain closeness involved. She learned a valuable lesson, though, about blurring the lines early in her career when she was a stage actress in New York. She recalled, “I didn’t quite get the difference between reality and fantasy — lines got a little blurry. So I ended up getting in a relationship with someone who I was playing a girlfriend to and it was just all wrong. Then you would have thought that I learned my lesson, but then I did another play and the same thing happened and there really was no chemistry.”

Burke enjoys working with Keach as her onscreen husband. “Stacy Keach definitely has swagger,” she said. “He is a sexy man and I love pretending to be married to him. I’m not married in real life and I don’t have a relationship, so I get to come to work and have this gorgeous man look into my eyes and tell me how beautiful I am and we get along really great.” 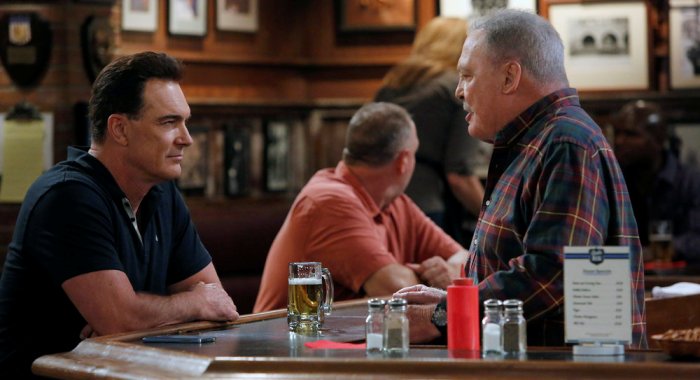 Keach told us the advice he gave his daughter entering the industry: “Be persistent and patient. Don’t take things too seriously. When rejection comes your way you have to learn to roll with the punches.” He feels that’s the hardest thing in the world, even for an experienced pro like himself. With disappointment and “unfulfilled expectations” at the crux of the business, Keach said he tries to impress upon his daughter and his acting students that the only recourse to rejection is to just keep going. “We have an idea of what we want to happen — and things don’t happen,” he said. “You crash and that’s not good. You’ve got to go on.”

So how does a successful actor like Keach still have rejection to contend with? He explained, “What you don’t see are the moments when the phone doesn’t ring, and the part goes to the other actor. You don’t get to see that.” He grew up in Southern California in a theatrical family — his dad was an actor. He got used to the life, but it still can be tough. “You never get to the point where you’re so jaded that it doesn’t affect you and disappoint you and [you] feel stung by rejection,” he told us. He teaches his students, “If you want to really be successful in this business, you have to be so determined that nothing will take you down. You have to have that kind of ferocious appetite for punishment.” 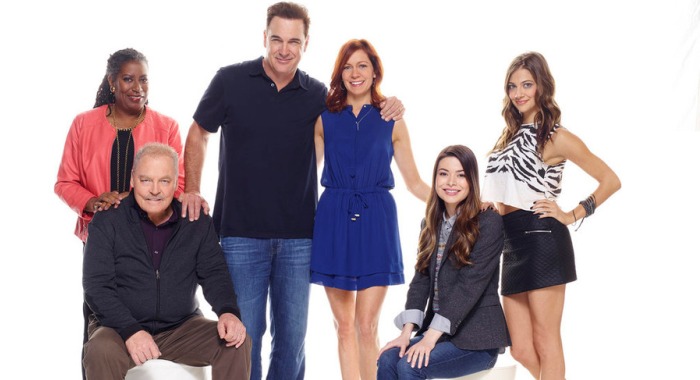 The creative team behind Crowded also worked on Hot in Cleveland, so it’s not a huge surprise that Betty White and Jane Leeves make appearances. Burke told us there was an exciting energy on set when the two arrived. “Betty White is just … Does anybody not like her? She’s 93 years old and still sexy and funny and sharp and witty — when I worked with her [on Cleveland] she was 89. It was actually her 89th birthday on one of the days that I was on set. Here she is now at 93. And then I said, ‘I want to be like Betty White’ — I was kind of imagining myself as the black Betty White of this cast. But then she showed up and I was like, ‘No, you are the queen. Just let me be Alice.’”