Having experienced a slice of the Old West in That Dirty Black Bag, star Dominic Cooper can confirm the era was hell.

“I mean, you’re about to be killed every second of every day. It was dry, arid, and nasty,” he explained. “You’re filthy, you stink, don’t wash [and] you’re on horseback the whole time.”

And that’s just one aspect of the hostile terrain his character, Arthur McCoy, and the rest face in the series. McCoy is the sheriff in Greenvale, a former boomtown which not only saw its gold mines run dry, but is in the midst of five-year drought. It is the sort of place where traditional white-hat and black-hat Western characters may find it difficult to survive. The morality of the character is just one of the topics Rotten Tomatoes discussed with Cooper when he spoke to us recently about the show, some of the shocks viewers have experienced in the first two episodes, and his love of Howard Stark.

Spoiler alert: The following contains details about the plots of “Chapter One: A Head Weighs Less Than a Body” and “Chapter Two: Prisoner” of AMC+ series That Dirty Black Bag. Stop reading here to avoid spoilers. 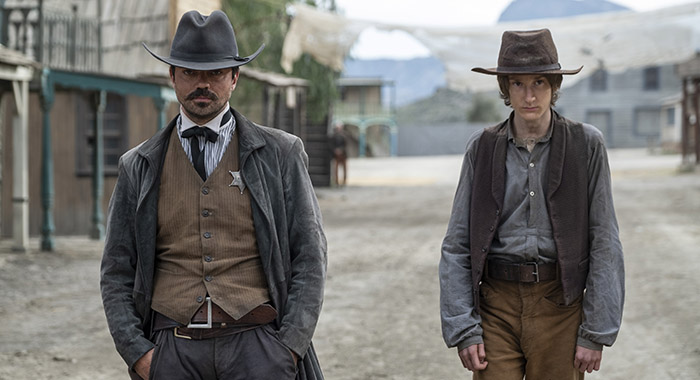 Erik Amaya for Rotten Tomatoes: It there room for a traditional white-hat or black-hat Western character in Greenvale?

Dominic Cooper: There is certainly is no good guy or bad guy in this — or not one that I can recognize. I don’t know whether I could come up with any good guy in it, quite frankly. I think they’re all pretty flawed characters in this environment. The more it was revealed about McCoy to me, the more I sort of disliked him, found him totally incapable of doing anything that was good for the people around him, himself, or a town in which he should have been looking after.

Since you mentioned McCoy is so dislikable, does shooting Jesse (Justin Korovkin) cement the way viewers will appreciate him?

Cooper: I was always amazed that would happen so early on. This was a conversation I was constantly having, once you’ve seen this man is capable of doing that, we are aware of who we’re dealing with and there was part of me that thought, “Should that be revealed so soon?” But actually it’s the beginning seeds of [learning] where this man comes from, how violent his past is, and how he is prepared to do that.

Also, he’s incapable of seeing the opportunity which presents itself. I think that always, for me, I was always like, “Why does he go after Bill?” He’s got this money. He’d get out of there. He wouldn’t waste his time with any of this. I worked out that it had to be something to do with being unable to confront his past and who he is. He’s found security in this idea of himself — this portrayal of a sheriff is actual bollocks. It’s not real. He’s not prepared to protect the town or go after the bad guys. He’s not prepared to lose his position. He’s prepared to steal some cash and he’s prepared to shoot a kid in case that gets discovered. I mean, he’s violent, but it was hard … that, in itself, means doing that act. It makes him incredibly dislikable early on. Because he’s a great character, Jesse, as well. He’s a lovely, sweet little kid. He’s just trying to do good.

But these are the people you’re dealing with in our show, in that world. And it’s revealed later on why he’s that man and why he does do that. 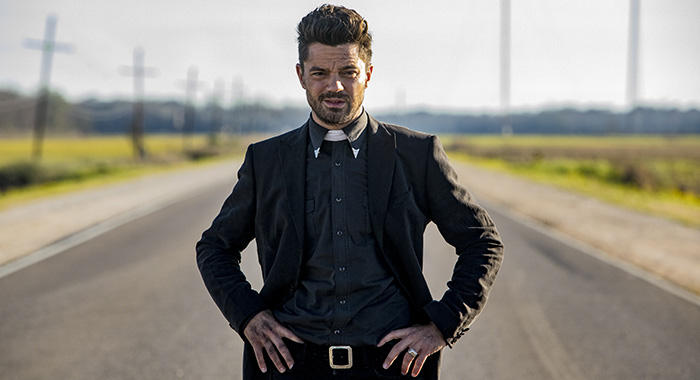 Also, considering the Preacher connection, was it odd killing someone named Jesse in a Western setting?

Cooper: It was just odd having a “Jesse” in the script, because I was just always like, “Oh, that’s me.” It was really wild. I kept going, “Well, hold on.” Your eyes just immediately focus in on that character, because five years of that being my name. Yeah. It was horrible. [Laughs]

Also, he was so great, that kid, working with him. We shot that scene many, many different ways, and it was why this project was so exciting to make. Decisions hadn’t really been realized [completely]. We were making it during COVID. It was all quite haphazard. It was all quite, “Where are going to shoot this scene? Over here, run over here.” We were all part of the mechanism and the process of it. And so, when you suddenly play that out, you’re like, “In the script, I shoot him with his face turned to me … There’s no way. I can’t do that. That makes him a really coldblooded motherf—er.” At least, if Jesse’s turning away and then you see a decision being made of our future or getting found out and then losing what we have, then at least there’s a human being weighing up the possibility. We see people like that all the time in life, who weigh that up and make a bad decision and do something violent and evil. But we were constantly being confronted with those conversations [on set]. and that made it challenging, but also made it exciting because you were literally having those chats on the day. 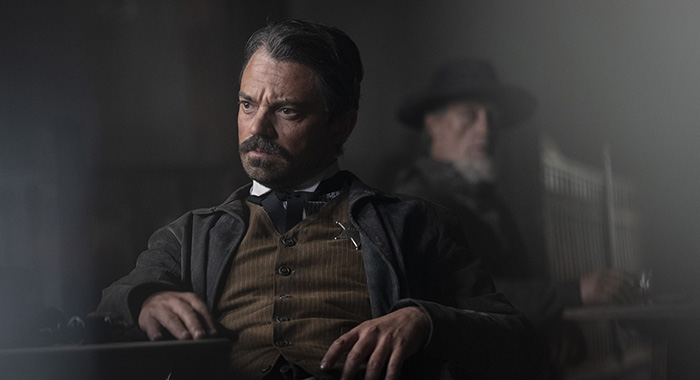 Were there similar chats when it came to offing Butler (Aiden Gillen)? It’s so sudden, but also it felt like he couldn’t last too long if Red Bill (Douglas Booth) was going to stay on the show.

Cooper: Exactly. In that moment [of filming], it that was totally different. I don’t remember what was originally there, but him being asleep outside and suddenly us discovering that he was the person, by seeing with the reins of the horse, that was different.

This is often the case. You have to be in the situation and the environment and on the set and speak the dialogue through. And then does that make sense actually? Do you know what? That’s not making sense to me. How will this make sense? How do we kill him? And you can only second guess what an audience is thinking at that time. Do you even care about Red Bill at that time? So do you even care that there’s this guy who has strung him up? Do you care that he’s stolen McCoy’s horses? 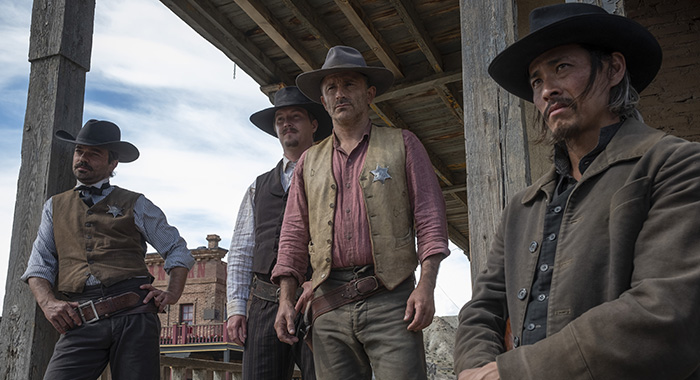 Cooper (cont.): I know that always [someone in the] audience is going, “Why the hell has he gone to chase this guy when he could just be running off with the money?” They’re interesting conversations, and you have to try and resolve them. And you have to try and figure out there and then, what would make that most compelling to the audience, most believable and still keep an audience engaged in it. If any of those moments, at any point you don’t believe, then everything falls on its face. Yeah. I blew his face off to save the guy who I wanted to hang up anyway.

Cooper: In the world we’re in, that’s what I do. Again, McCoy’s flaw is that he wants to prove himself to look strong in front of the town. But why? He’s got loads of money. He could take off. So there’s something else that’s at the heart of that.

Look at the world we’re in at the moment. Why are people making decisions they’re making? Why are they doing it? For what reason? Because there’s either something eating away at them, or they’re power crazy, or they’re scared. All you can hope is that an audience wants to go along with them and see them through and get the answers. 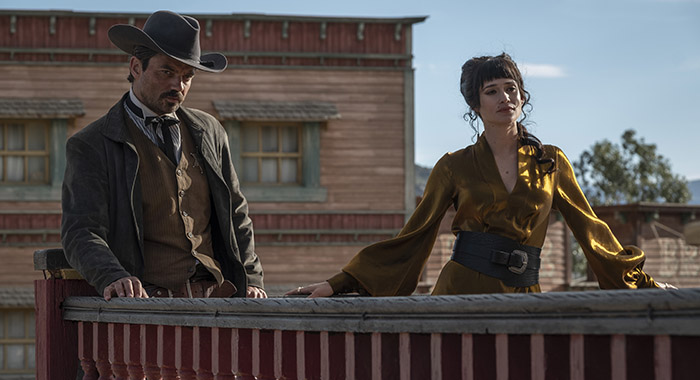 Since McCoy is trying to prove himself as this big man in town, is he aware of the other things that are happening? Does he know about Steve’s (Christian Cooke) relationship with Eve (Niv Sultan)? Does he know what’s going on between Symone (Rose Williams) and Nathan (Benjamin Stender)? Does he even care?

Cooper: Yeah, you feel that he’s slightly removed from it all. I think it’s just ultimately [part of] what he’s hiding from. And you can understand why he doesn’t want to shake anything. He doesn’t want to cause alarm. He doesn’t want to be known even though he is quite a showman. Not making the fuss of it or not getting too involved in people’s affairs and just keeping his cards close to his chest is good for him. But I think he knows exactly what’s going on with everyone and I think he rolls his eyes at it all. I think he dismissed it. He thinks everyone’s a bit of a moron, to be quite honest. 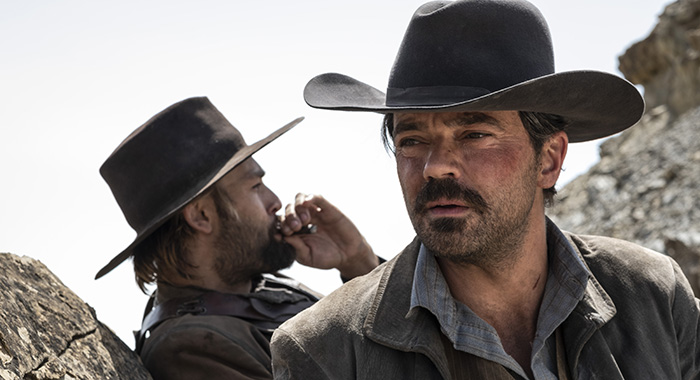 Considering the show is committed to subverting expectations so far, is there any chance of Bill and McCoy actually working together? In the grammar of Westerns, it often happens, but it feels like the show is leaning in the opposite direction.

Cooper: They have a very topsy-turvy relationship, because they do actually really end up needing each other, but they don’t necessarily find a way in which to achieve that. They’re too damaged and incapable of understanding what is damaged about them and what help they need. They could actually fix everything, but whether that’s the choice they make or not, I’ll leave that to be seen.

From the standpoint of episode 2, do you have a guess as to why Steve is hiding the gold?

Cooper: I couldn’t work it out — and actually that’s one thing I really loved about [the show]. Steve is the character who seemed so good and seemed to be doing it just for the good of humanity and what people should stand for. And yet … he is sitting on it. But again, it’s another storyline in this that I find really compelling. I really want to see how that plays out and who wins that battle.

Should viewers be watching out for that eye at the end of episode 2 in subsequent episodes? 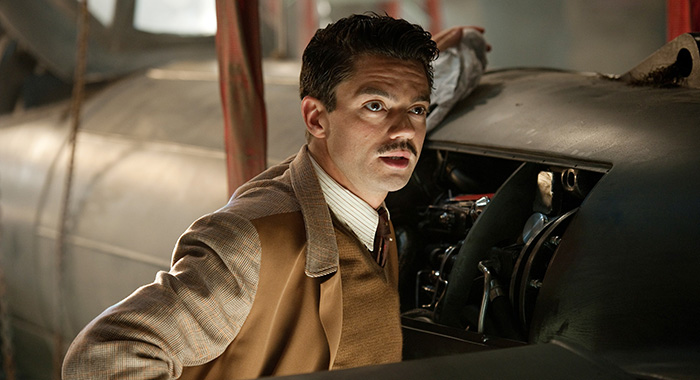 One Marvel question: Will you always answer the call to play Howard Stark? It was a pleasure hearing his voice again in that What If…? episode.

Cooper: I loved it and I loved playing that role. I didn’t quite really realize how much or how important it was or how much I miss it. I really miss playing him. It’s only with time, I suppose, that you really, you reflect on actually, “Wow. That was such a wonderful opportunity” and how much you appreciate it and what fun you had doing it.

We are always having conversations. Marvel is so amazing at re-imagining their worlds, and there’s always talk of how he can come back or a way in which you’ll see him again. But, yeah, I’d love to do more.