#59Multiple enemies put pressure on Rick and the group.

#58Obstacles are encountered by the group members on a mission to find supplies. Meanwhile, conditions at the prison get worse.

#57Andrea and the Governor bond, while Michonne comes to a decision about Woodbury. 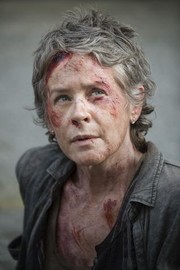 #56Members of the group venture into a familiar location on a heroic rescue mission.

#55With the threat of the Saviors still looming, Aaron continues searching for allies. Daryl and Rosita take action and confront an old friend.

#54Rick and the group are led to a new community, where they are introduced to its inhabitants and ruler, and a familiar face resurfaces.

#53A bizarre but enlightening mission is brought on by a group member’s simple request.

#52Faith becomes a survival tool for some fighting to stay alive.

#50A new weapon in the Savior arsenal proves to be a giant hurdle as fighting continues.

#49Molding into a new lifestyle proves difficult for the group.

#48Rick’s vision of a civilized future is threatened by a sudden reckoning with past sins that remain unavenged and unforgiven.

#47Daryl’s daring rescue mission forces Alpha to unleash a group of her own to retrieve what belongs to her, even if the price is paid in blood. The Kingdom’s plans to reunite the communities is put in jeopardy.

#46Rick and his group face a number of challenges while trying to secure their new home.

#45After a zombie attack, Rick and the group set off for the Center for Disease Control in Atlanta, and Jim must face a life-or-death decision.

#44Rick’s mission to return to Atlanta may need to be aborted when he runs into some unforeseen problems. Meanwhile back at camp, Jim appears to be going off the deep end.

#43The fair at the Kingdom is underway, with all four communities coming together in celebration for the first time in years. While some pacts are renewed, other deals will come at a much steeper price.

#42Rick brings ‘All Out War’ to Negan and his forces in season 8. The Saviors are larger, better-equipped, and ruthless, but Rick and the unified communities are fighting for the promise of a brighter future. The battle lines are drawn in the season premie as they launch into a kinetic, action-packed offensive. As with any battle, there will be losses.

#41A new face is introduced, and people question who can be trusted and who can change.

#40Against his better judgment, Rick heads back to Atlanta to recover his cache of guns and ammo and hopefully retrieve the redneck bully originally left behind. Meanwhile, Lori and Shane are shocked by the return of someone they feared was dead.

The Best Apple TV+ Shows and Movies, Ranked by Tomatometer (May 2020)