#79The group finds a place to establish a new shelter.

#78A rescue mission while attempting to hold down the church leaves the group spread thin.

#77Hilltop’s leadership faces a difficult dilemma after the arrival of unexpected visitors; meanwhile, Rick comes face-to-face with an adversary.

#76In the season 5 finale, Daryl experiences trouble on a run; meanwhile, Rick and his group continue to feel like outsiders in Alexandria, where trouble is creeping into the gates. 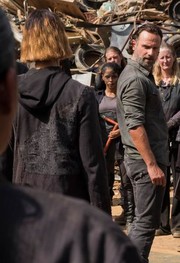 #75On the search for a missing Alexandrian, Rick and his group encounter a mysterious collective, whose inhabitants are unlike any they have come across.

#74In the season 7 finale, the stakes keep mounting higher and higher as different stories clash, while the group enacts an intricate plan.

#73Rick and the group contemplate their next move after their security has been compromised, while Andrea becomes uncomfortable with the changes under way in Woodbury.

#72Rick and the group face setbacks as existence within the walls starts to mimic life outside.

#71The group await Shane’s return, unaware that he’s trapped in a school surrounded by zombies; Daryl and Andrea scour the woods for a missing person.

#70The appearance of an outsider puts Rick and Shane at odds, Hershel’s youngest daughter faces a momentous decision, and Andrea steps in to help.

#69An outsider’s arrival forces Alexandria to rehash devastating old wounds; eye-opening secrets from the past are revealed.

#68Rick is faced with multiple immediate threats, while other group members deal with the past.

#67Keeping with the routine supply drop-off, a group of Kingdommers deliver goods to the Saviors, but things don’t go as planned.

#66A fight causes tensions in Oceanside; The Alexandrians set out on a high-stakes mission.

#65Rick and the group find themselves pitted against some nasty people.

#64Groups unite their forces and converge on the Hilltop. Meanwhile, Aaron and Enid search for allies; and Simon takes matters into his own hands.

#63An Alexandrian must navigate the mysterious world within the Saviors’ compound.

#62Lives are endangered when the group gets separated, while in Woodbury, Merle makes an appeal to the Governor.

#61Just as things start to calm down at the prison, Rick and the group face imminent danger.

#60The threat of the Whisperers return leads to paranoia sweeping over Alexandria; in the meantime, Carol battles with the need for revenge.