#99Negan has to enlist the help of his lieutenants in solving a huge issue facing the Sanctuary. Rick and the group continue to enact the plan.

#98Rick is forced to face the past as he struggles to maintain the safety of the communities and protect the future he and Carl envisioned. 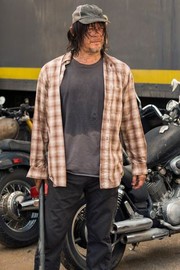 #97With members out scavenging for supplies, Negan’s unwelcome visit to Alexandria continues. With tensions high, things quickly spin out of control.

#96Members of the group scavenge for supplies. Meanwhile, back in Alexandria, someone must make a morally-challenging decision.

#95While searching the woods for clues, Daryl is seriously injured and set upon by walkers; meanwhile, Rick second-guesses himself, and Glenn believes he’s getting positive signals from Maggie, but then isn’t so sure.

#94A much more detailed look into the world of the Saviors and their home, the Sanctuary, is shown. Meanwhile, members of Alexandria look for supplies.

#93Carol seeks out an old friend living alone in a wilderness teeming with walkers. Survivors make the perilous trek to a new home.

#92A captive or a refugee? A new arrival at the Hilltop opens up about the leader of a group of mask-wearing savages. A search party sets out on a daring mission to find two missing friends.

#91Alpha’s savage group confronts the Hilltop in a harrowing attempt to retrieve her daughter. A supply run for the Kingdom turns into a dangerous quest.

#90After a spectacular storm, Rick and the group meet a seemingly friendly person.

#89A situation in Woodbury throws inhabitants for a loop and forces Andrea to take charge, while a new threat arises at the prison. 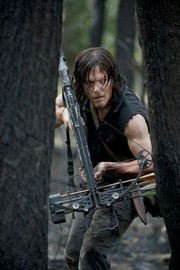 #88Daryl, Abraham, and Sasha run into multiple obstacles, including a new threat, while trying to return to Alexandria after a mission.

#87With war raging all around him, Negan and the lives of the Saviors are seen by a familiar face during the conflict.

#86In the season 1 finale, a strange doctor allows Rick and the group access to the CDC, but things are not truly as they seem there.

#85A possible truce with the Governor comes with strings attached for Rick and the group.

#84The new turns and twists, the plot thickens.

#83Rick deals with old wounds while members of the prison try accept their new environment.

#82A small rescue mission braves a dangerous herd in their hunt for a missing comrade, only to discover a surprising threat that could doom them all.

#81Rick faces new difficulties after a battle; meanwhile, the fight continues in other communities as core members face hard decisions.

#80The Survivors encounter unfamiliar faces outside the safety of their community’s walls and must decide whether or not this new group can be trusted.