Writer-director King talks to Jacqueline Coley about her own struggles with high expectations, how a smashed plate inspired her acclaimed film, and why she wants to know as much about the business of Hollywood as the art.

Kristian King’s Twice As Good is part of the Scene in Color Film Series, presented by Target, which shines a light on incredible filmmaking talent. As part of the series, three emerging filmmakers will receive mentorship from producer Will Packer, and their films are available to watch on Rotten Tomatoes, MovieClips Indie Channel, Peacock, and the NBC App.

Filmmaker Kristian King says the ideas for her movies often stem from a single image. In the case of Twice As Good, which was selected to be part of the Scene in Color Film Series, that image was a smashed plate – something delicate but strong, perfect in its shape and form, that one day comes completely apart.

It’s an image you’ll find in her acclaimed short, and one that speaks vividly to its central themes: Twice as Good is the tale of a Black high school overachiever under crippling pressure to be excellent, dealing with a secret on one of the biggest days of her young life – one that could shatter her world. It is brought to life by an incredible performance from Sojourner Brown, and deft writing and direction from King, who – in just 11 minutes – unfolds a moving and tense story populated by characters we rarely see on screen.

Taking part in the Scene in Color Film Series not only means King’s short is available to watch on Rotten Tomatoes, MovieClips Indie Channel, Peacock, and the NBC App, but that she takes part in a mentorship program with mega producer Will Packer, whose credits include Girls Trip, Think Like A Man, and Ride Along.

In the lead up to her time with Packer, King spoke with Rotten Tomatoes editor Jacqueline Coley about the development of her short film, telling a culturally specific story, and what she hoped to learn from her mentorship.

Jacqueline Coley for Rotten Tomatoes: Let’s talk about your journey to filmmaking and why you wanted to be a director.

Kristian King: Up until my last year in college at Duke University, I was fully headed towards a career in science. I loved chemistry and physics in high school, and in college, I was a biology major. I didn’t hate science, in fact, I really enjoyed it, but in the back of my mind, film was my true love.

I grew up obsessively watching films, my siblings and I used to be able to quote entire movies to each other. As I grew older, my dad introduced me to a lot of filmmakers like Spike Lee and Tarantino. However, despite that love, I didn’t know it could be a real career until I got to college and met filmmakers and other artists.

While in college, I volunteered in children’s cancer ward during one summer and it really affected me. That experience gave me a greater appreciation for the work that doctors and nurses do, but I also began to realize that it wasn’t going to be my path. After spending most of my life thinking I would be a doctor, I thought, “What now?”. I started working in a breast cancer research lab and really enjoyed my time there, but it still wasn’t quite as fulfilling as I had hoped it would be. Thankfully, my mentor at the lab encouraged me to give myself the opportunity to explore other careers. It shouldn’t be something you just fall into, especially when you have the privilege to choose.

I made my very first short film during my senior year – I still had a lot to learn, but it was so much fun. I also experimented with directing theater and acting; I wanted to try everything. I knew for sure from the moment I was on a short film production where I was so cold, that my limbs went numb, but I still knew this was the right path.

After I graduated, I worked in clinical research to pay bills. I spent my evenings working with wonderful artists in Durham’s theater and arts community and made short films whenever I could. Three years later, I began New York University’s MBA/MFA program, which has allowed me to pursue filmmaking full time. 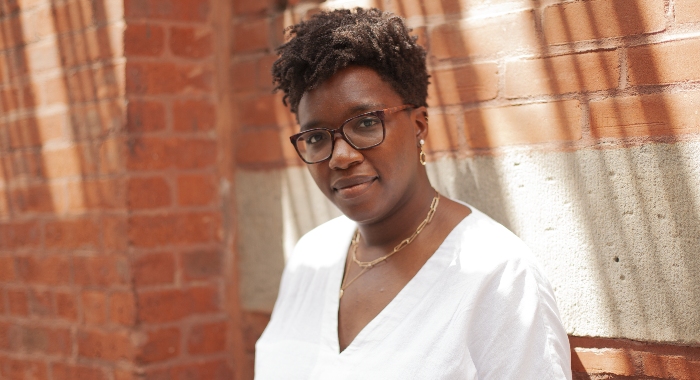 Coley: I know Spike Lee is a professor there, among others, and you really get to sort of learn at the hand of some incredible filmmakers and people that are passionate about film. But when did you know you were going to do this film, Twice As Good, as your short? Was this something that had been percolating?

King: This was my thesis project and it took some time to come up with it. A lot of my films start from an image often divorced from what the film will end up being. I had recently rewatched one of my favorite films, Blue Valentine. I found the imagery of the fireworks inspiring. I’m generally obsessed with fire and fireworks, but there was something about the end credits that struck me. I wanted to translate it into something fun and interesting.  I’m not sure how that turned into broken plates – that’s the one leap I can’t really explain – but I worked backwards from that to find the story.

This film represents what I always want to talk about more, which is: exploring Black relationships. In this film, I question what it means when we place “Black excellence” pressures and expectations on people. There’s certainly a reason why we do this, but at the same time, underneath, we should wonder how this positively and negatively affects us.

It’s also very personal to me because for anyone, when they become adults and things aren’t going the way their parents expected, there’s going to be a moment where they have to actually say to your parents, like, “Hey, I’m not going to do this thing that you maybe always wanted me to do.”

Coley: The thing that I felt about your work that was just so resonant was that it really illustrates the nervous energy and the tension of being young, Black, and gifted, which is as much of a burden as having no one expect anything of you. And it seems like with Black folks, you’re either cast as one or the other. I’m just curious for you and the choice to capture your lead character’s nervous energy. How was it directing that and what were you saying to the actress? Because I felt like I was like, “Oh, I know this girl: She is definitely a Wellbutrin daily.”

King: There’s an undercurrent of mental health in the film – I imagined that once Ann gets out into the world, the next step for her is also a therapist. A few days before production, my lead actress had a scheduling conflict, so it was a scramble to find someone else to fill the role. I was incredibly lucky to find Sojourner Brown, thanks to a recommendation from another artist. We really only talked on the phone and the first time I actually met her was the first day of the shoot. I had a good feeling from the phone call, because she understood exactly the type of character Ann was. I explained to her that what’s underlying Ann’s anxiety is the need for everything to be perfect and held together. And we tapped into our own experiences of what it’s like growing up as a black woman.

Once we filmed the first scene, I felt incredibly blessed, because Sojourner brought Ann to life in a way I could not have imagined. She completely embodied the character.

Throughout the shoot, we discussed each scene to help her find Ann’s head space in that moment and Sojourner always got it. We would add stuff on the day, like making sure, when you’re putting up decorations, everything’s in a very straight line, small things like that, which makes a character feel real.

Coley: One thing I like with shorts, in particular, is that, because you don’t have a long time and there’s not a lot of room for exposition, you have to tell a lot about characters visually. And there are a few things that I saw that I particularly keyed in on that said something about the characters. I noticed that the mother,  like a lot of women of that age, had her hair straightened. Then the daughter had natural hair. I noticed that the teacher who handed her the cookie had a periodic table sash, basically I think signifying her being just a little bit off kilter, very Tracee Ellis Ross. Can you talk about how these Black women were framed?

King: Overall, even beyond the women, I wanted this to be a Black world where we see all different types of people, because I think we have seen so many films where, like you said earlier, it’s either one very smart person or a bunch of like, not – we don’t get much in-between.

With the mother, she is this lawyer who likely has had to be in the many white spaces. And I was very intentional about how she looked: straight hair, suit. It also speaks to her generation as well. For Ann, it was important for her to have natural hair because I think it speaks to her character – because we do still live in a world obsessed with euro-centric beauty standards, so when you wear your natural hair, it is an act of strength. It’s an act of rebellion. Mrs. Tyler is absolutely the kooky, off-kilter science teacher. She could care less what anyone thinks of her, she inhabits her own space. All three of the actresses understood what I was going for with the characters and I think hair is an important detail.

Coley: Let’s talk about this program and this mentorship. I know from talking to Will Packer that he is so intentional when he talks about Black cinema and where he feels it is placed and, more importantly, where he feels he will not allow people to place it. How do you feel about being mentored by Will Packer and what are you most looking forward to from the experience?

King: I’m super excited. The work he has done is amazing and I have so much to learn from him. I love directing and writing, but I also went to business school while I was doing film school. My goal is to be in a similar space that he’s in – I want to create my own work and empower people to tell their stories as well. I’m interested in how he built his company and put his amazing projects together. Finding investors and getting your projects made is such a huge part of navigating this industry, and I want to make sure I understand as much as possible. That was my goal of going to business school: I needed to learn how the business side of the film industry works, because when I get into a room and someone tells me that a project’s not going to be profitable, I want to be able to not just say that they’re wrong, but explain why. 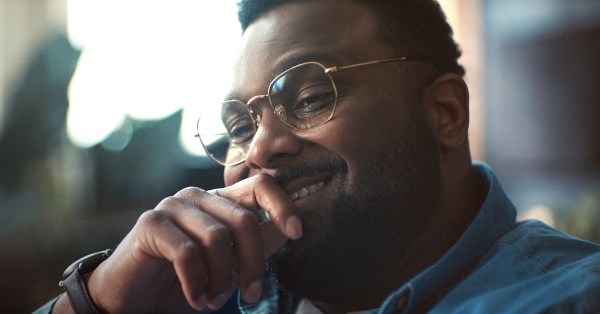 Filmmaker Addison Wright Turns His Lens to An Inspirational Chicago Dance Troupe in Hiplet, And Hopes His Films Opens Hearts and Eyes 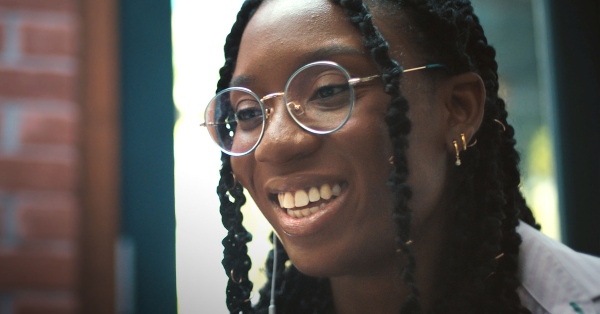 Filmmaker Ewurakua Dawson-Amoah On Her Uncompromising Celebration of Black Women, To The Girl That Looks Like Me 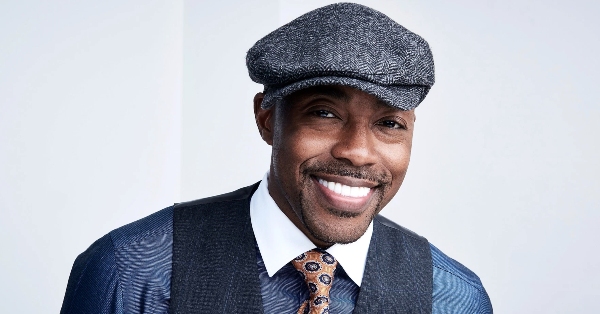